At the age of 10, Stephen Brackley won a week for his family at Tarryall River Ranch in Lake George, Colorado.

Here’s what happened when he found out he’d WON! >>>

<<< Here’s a little taste of his RANCH experience! 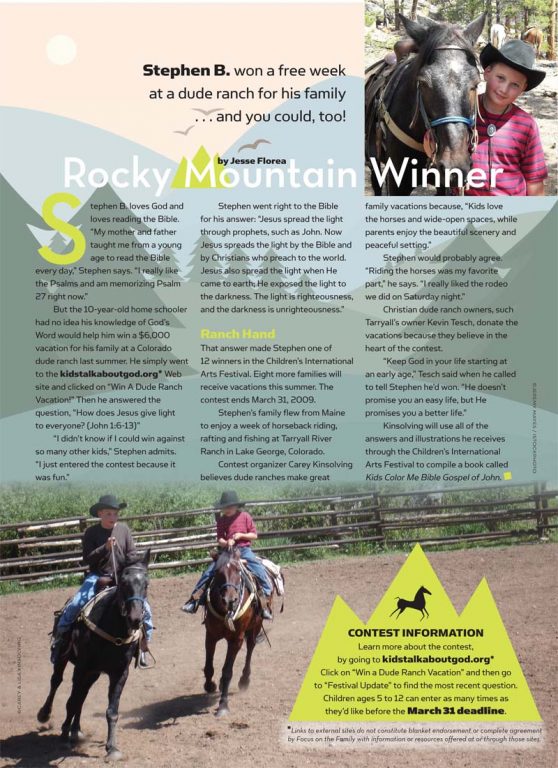 Festival Question: How does Jesus give light to everyone? (John 1:6-13)

And because the festival is ongoing until March 31, 2009, other local children are invited to send in entries for a chance to win a similar vacation in the summer of 2009. Entry forms can be downloaded at www.KidsTalkAboutGod.org.

As his prize, Stephen Brackley, 10, will spend a week with his family this summer at the Tarryall River Ranch in Lake George, Colorado.

“I won!” said Stephen, after hearing the news that he was a winner. “Wow! I can’t believe it! When can we go to the dude ranch?”

Stephen recently spoke by telephone with Kevin Tesch of the Tarryall River Ranch. He learned a little about how different life will be on a ranch in the high country of Colorado. He’ll have his own horse for the entire week.

The Brackley family will stay at Tarryall River Ranch July 20-27. While there, the family will have opportunities to ride horses in the high country, go river rafting through Brown’s Canyon, fish for trout in the Tarryall River and eat steak cooked over an outdoor grill.

“Stephen has always pretended to be a cowboy and can’t wait to really go to a real dude ranch himself,” said Susan Brackley. “Stephen is very sensitive to the things of God and reads his Bible daily.”

Stephen became a winner in the Children’s International Arts Festival by answering the question, “How does Jesus give light to everyone?” (John 1:6-13). His answer: “Jesus spread the light through prophets, such as John. Now Jesus spreads the light by the Bible and by Christians who preach to the world. Jesus also spread the light when he came to earth; he exposed the light to the darkness. The light is righteousness, and the darkness is unrighteousness.”

A home schooled fifth-grader who was born in Farmington, Maine, Stephen likes to fish, play football, hunt, draw, ride bikes, read and work with his dad and brothers. His oldest brothers, Matthew and Justin, are married, but he still likes to spend time with them, often visiting their homes to help with projects. His father, Robert, owns a business that restores antique buildings. His mother, Susan, is a homemaker who teaches her children at home.

Kinsolving said the response to his work has been enthusiastic and heartwarming. Readers are reminded of what Jesus meant when he said we must enter His kingdom with the faith of a child.

“Children have a way of touching our hearts and reminding us that we must come to God with childlike faith,” he said.

To enter the festival and become eligible for a dude ranch vacation prize, children ages 5 through 12 are asked to answer Bible questions and draw art to illustrate their answers. Selected drawings and essays will be published in Kinsolving’s latest project, the “Kids Color Me Bible Gospel of John.”

Stephen said he has been encouraging other kids to enter the online arts festival for future prizes.

For entry information, visit www.KidsTalkAboutGod.org and click on the “Children’s International Arts Festival” link. Information about the participating dude ranches also appears on the site.