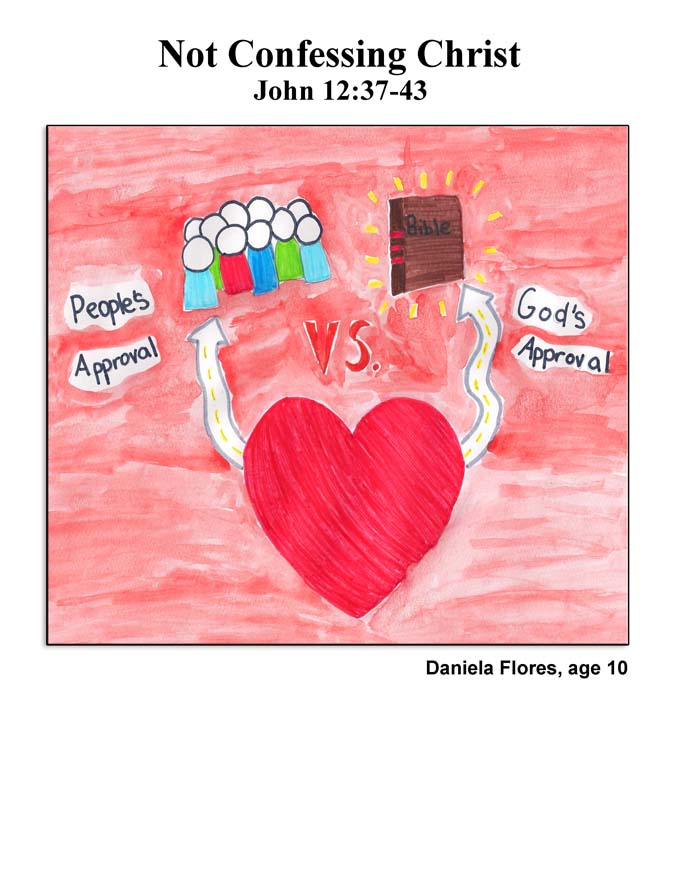 “Lord, who believed what we told them?
Who has seen the Lord’s power?”

41 Isaiah said this because he saw Jesus’ divine greatness. So he spoke about him.

Why do some Christians love people’s approval more than God’s approval?

“Bad people tell Christians to do bad things, so they do it and they like it. So they forget about what God wants them to do.” Natalia, 9

“Because they don’t fully believe in God that much. They don’t think he is telling the truth so they believe what other people think or say.” Roberto, 9

“In real life, people follow bad things and worship idols, but there is hope for sinners. Believe in God the King of kings, the Lord of lord. Believe in him.” Elijah, 10

“Some Christians like people’s approval more than God’s. They have the desire for people to like and admire them. They wish for people to want them. They want people to care and listen. But God is the one who cares the most. He will approve of you. He will willingly listen to you. Listen to him. Follow in his footsteps. Be a disciple who would walk with him. Share the gospel. Now go and preach. Be the church.” Braden, 11

“You probably don’t realize that most Christians like man’s approval more than God’s. One reason is because they are afraid of being embarrassed for not being cool in their friends’ eyes. The fear of losing respect from family or friends, or disapproval from other people, can drive you to want to also do what is apparently cool or good. What God wants is always better.” Nicolas, 12

“Lord, who believed what we told them? Who has seen the Lord’s power?”

People who saw Jesus do miracles should have believed in him as their savior or messiah, but most did not believe. Remember what Nicodemus said when he came to talk with Jesus at night: “Teacher, we know that you are a teacher sent from God. No one can do these miraculous signs that you do unless they have God’s help,” (John 3:2).

All who saw Jesus do miracles should have responded like Nicodemus. But instead of reaching the same conclusion that Jesus was from God, they hardened their hearts in unbelief. Some even said that Jesus performed miracles by the power of Satan (Matthew 12:22-28).

The Apostle John quotes from the prophet Isaiah when he writes, “God made the people blind. He closed their minds,” (John 12:40). This is what happens when people say “No” to what God has shown them.

One of the most famous examples of spiritual hardening is Pharaoh. God kept performing miracles through Moses and Pharaoh kept refusing to let the people of Israel leave Egypt. The Bible tells us the Pharaoh hardened his own heart and God hardened Pharaoh’s heart (Exodus 8:32 & 9:12). Both are true. It’s a process.

The more spiritual light people refuse, the harder their spiritual hearts become. Finally, they reach a point where they are spiritually blind. As our Bible text says when it quotes Isaiah: “He did this so that they would not see with their eyes and understand with their minds,” (John 12:40).

41 Isaiah said this because he saw Jesus’ divine greatness. So he spoke about him. 42 But many people believed in Jesus. Even many of the Jewish leaders believed in him, but they were afraid of the Pharisees, so they did not say openly that they believed. They were afraid they would be ordered to stay out of the synagogue. 43 They loved praise from people more than praise from God.

How could the prophet Isaiah see Jesus’ greatness if he lived hundreds of years before Jesus was born? He saw Jesus in glory on his throne in heaven (Isaiah 6). Remember, Jesus always existed as God.

When Jesus appeared to anyone before he was born, it’s called a theophany. This word comes from two Greek words: “Theos” means “God” and “phainein” means “to show.”

Jesus showed himself to Isaiah before he was born and to the Jews during his ministry with miracles. When Isaiah saw Jesus in his heavenly glory, he was afraid. In the presence of God’s glory, power and holiness, Isaiah saw his own sinfulness.

Jesus’ miracles during his ministry were like flipping on a light switch where God’s glory was shown. Many believed in Jesus when they saw him perform miracles. But many did not.

John 12:42 says that many of the leaders of the Pharisees believed in Jesus, but they were not willing to say openly to others that they believed in him. Why? They were afraid the Jews who did not believe would kick them out of their synagogue, which is kind of like our church. It’s the place where Jews met each Saturday to worship the Lord and read the Old Testament Bible.

If someone was kicked out of the synagogue, that would mean that most unbelieving Jews would avoid them. If they owned a business, people might not shop with them. If they worked for someone, they might lose their job.

The real reason they didn’t want others to know they had believed in Jesus is in the next verse: “They loved praise from people more than praise from God,” (John 12:43).

Some pastors and Bible teachers say that these Jews didn’t really believe in Jesus because they valued praise from people more than praise from God. What is wrong with this understanding?

The Bible tells us that these Jewish leaders “believed in Jesus.” That is the same language as John 3:16 where it says that whoever “believes in him should not perish, but have everlasting life.” Because we do not like the fact that these leaders didn’t openly confess their belief in Jesus does not mean that they didn’t really believe.

The kind of faith that gives you forever life is all about where you place your faith. In the Bible, faith is never presented as a work. It’s the means by which we receive God’s gift of eternal life. Saving faith is the hand of the beggar reaching out to receive the gift, said Martin Luther. No one but a fool would say that the beggar earned the $5 that someone dropped into his hand.

It’s faith alone in Jesus Christ alone that saves you, not faith in Christ plus your good behavior or good deeds.

After you believe in Jesus as your savior, should you confess him or tell others about him? Yes! God wants all believers or Christians to confess him openly to the world. In fact, water baptism is the first step in doing that. God wants all people to come into his kingdom and you are his royal ambassadors to show them Jesus!

Does telling others about Jesus pay the penalty for your sins? Is baptism a requirement for eternal salvation? No way! Only the sacrifice of Jesus on the cross pays the penalty for our sins.

There are many Bible verses where we see believers doing sinful things. Does this mean they never really believed in Jesus? That is total nonsense. It’s also dumb. Here’s why.

Just because you believed in Jesus as your savior does not mean that you cannot sin against God and people. When you do sin, it’s a family matter. God will discipline his children because he wants to bless them (Hebrews 12:6). Jesus wants to train you now so that you can help him rule in the kingdom he will establish on earth (I Corinthians 3:11-15, Luke 22:28-30).

Jesus promised eternal life to all who believe in him (John 3:16). That’s forever and can never be taken away!

Jesus promises abundant life to all who follow or obey him (John 10:10). Eternal life is guaranteed to all believers. Abundant life is not guaranteed. Abundant life comes to those who love Jesus more than themselves. In fact, the first requirement for following Jesus is to deny yourself (Matthew 16:24).

There are also big-time rewards in Jesus’ forever kingdom for all who follow him. Jesus will reward something as small as a cup of water given in his name (Mark 9:41). Jesus is going to want a lot help to administer his worldwide kingdom. Do you want to be on Jesus’ guest list when he throws a party for those who help him rule his kingdom? 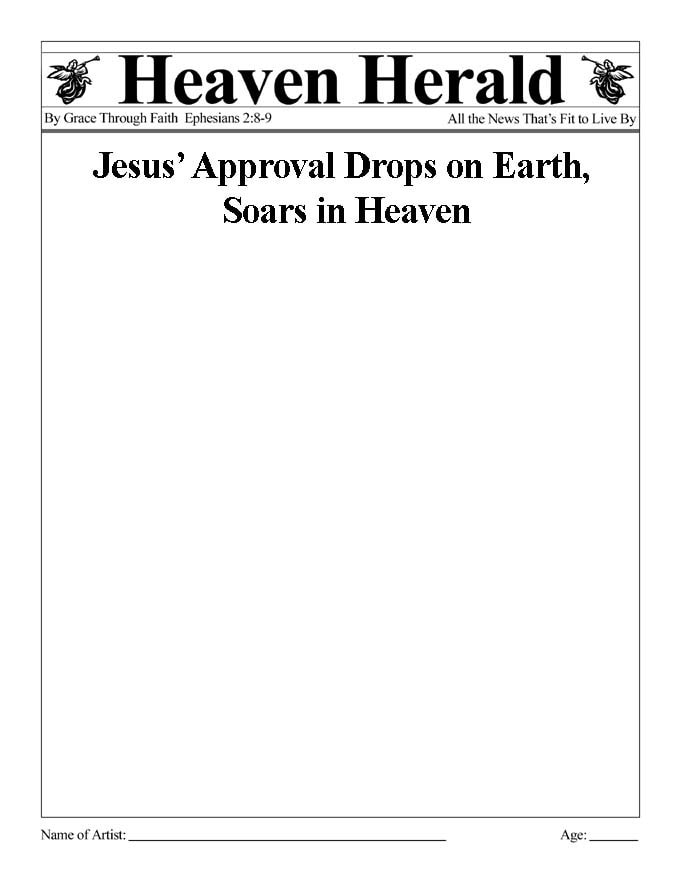 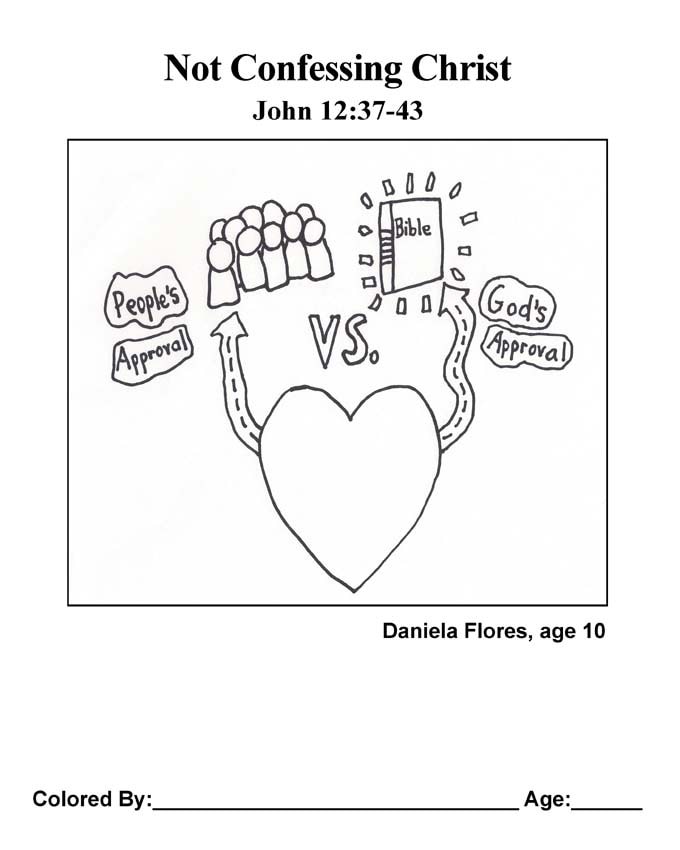