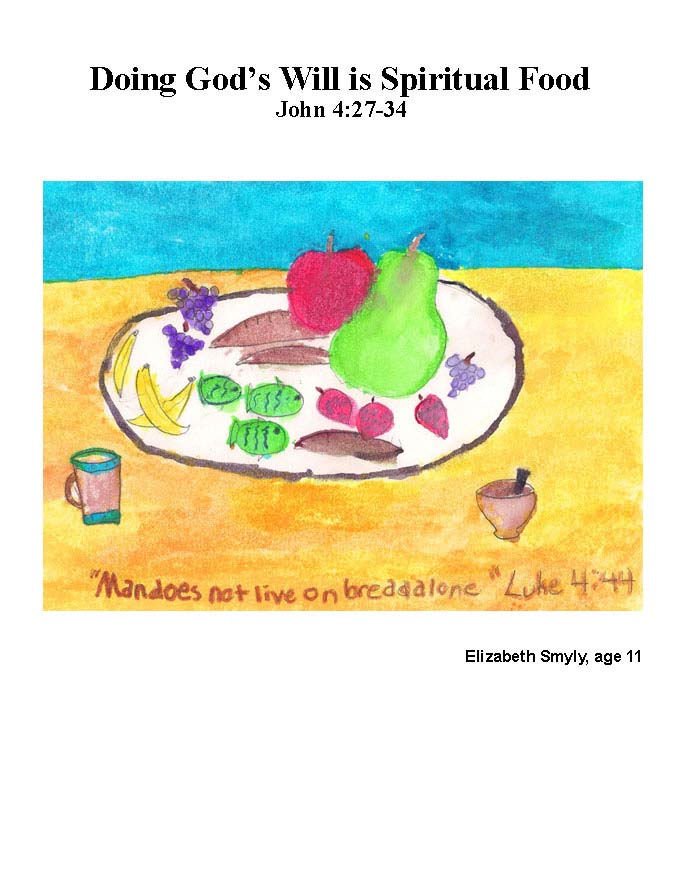 Doing God’s Will is Spiritual Food

27 Just then Jesus’ followers came back from town. They were surprised because they saw Jesus talking with a woman. But none of them asked, “What do you want?” or “Why are you talking with her?”

28 Then the woman left her water jar and went back to town. She told the people there, 29 “A man told me everything I have ever done. Come see him. Maybe he is the Messiah.” 30 So the people left the town and went to see Jesus.

31 While the woman was in town, Jesus’ followers were begging him, “Teacher, eat something!”

32 But Jesus answered, “I have food to eat that you know nothing about.”

33 So the followers asked themselves, “Did someone already bring him some food?”

1 Before the world began, the Word20 was there. The Word was with God, and the Word was God. 2 He was there with God in the beginning. 3 Everything was made through him, and nothing was made without him. 4 In him there was life, and that life was a light for the people of the world. 5 The light21 shines in the darkness,22 and the darkness has not defeated23 it.

How was doing the will of God like food to Jesus?

“We get bigger by eating healthy stuff and obeying God’s word helps us grow.” Marina, 5

“One thing I enjoy doing is pleasing my family, especially my parents. When Jesus did something that he knew pleased God, he felt so joyful sometimes that his nourishment was the joy he felt.” Theresa, 11

“Jesus knew that his food was to do the will of God. To finish God’s work meant that he had to die on the cross. When he died and rose again three days later, he had finished God’s work.” Daniel, 10

«If you eat healthy food, it gives you energy and makes you happy. So doing the will of God is like food to Jesus because it makes him so happy that he is teaching people how to go to Heaven and gives him energy to walk from town to town to tell more people about Him. You can do God’s will, too. Ask your mom to take you around the neighborhood to tell people about Christ and how to get to Heaven. This will make you happy, just like eating macaroni and cheese!» Drew Sigler, 7

Jesus surprised his disciples by talking with a Samaritan woman he didn’t know. In the culture in which Jesus lived, men didn’t talk with women that they didn’t know. Also, this woman was a Samaritan, not a Jew. The area of Samaria was on the way from Jerusalem to Galilee where Jesus was going.

The Samaritans set up their own place of worship on Mount Gerizim. This is the mountain in Samaria where Abraham offered a sacrifice to God. Abraham is the father of the Jewish race. The Jews worshipped God in the temple at Jerusalem.

Every culture has prejudice. People like to think they are better than those who are different from them. If you believe that God created all people and loves them, you can live without prejudice and live with compassion. Seeing people and the world around you will keep you from thinking you are better than others.

In order to love someone, you don’t have to like what they do. Jesus knew the Samaritan woman at the well was living with a man to whom she was not married. The Samaritan woman had been married five times. This probably meant that some of those marriages had ended in divorce.

When Jesus prayed to his Father shortly before dying on the cross for our sins, he prayed, “And this is eternal life: that people can know you, the only true God, and that they can know Jesus Christ, the one you sent” (John 17:3).

After you receive eternal life by trusting in Jesus as your savior, God sends the Holy Spirit to live within you. As you learn to listen to God and start seeing yourself and the world around you through the eyes of God, you will learn to overcome sin.

Immediately after believing in Jesus as her Messiah or savior, the Samaritan woman went to tell others about Jesus. When telling the men of her town about Jesus, she used her brain. She didn’t preach at them. Instead, she made them curious. She said that Jesus had told her about her past. Then she topped it off by saying: “Come see him. Maybe he is the Messiah” (John 4:29).

When the disciples offered Jesus food, he said, “I have food to eat that you know nothing about” (John 4:32).

Have you ever enjoyed God so much that you forgot to eat food? Not many people have enjoyed God this much. Most of us think only about eating food when we get hungry. Jesus always thought about doing the will of his Father. That was more important than eating food. By talking with the Samaritan woman, Jesus did what was pleasing to his Father. You could say that this was a kind of spiritual food for Jesus.

Jesus said, “I have told you these things so that you can have the true happiness that I have. I want you to be completely happy” (John 15:11).

In his Sermon on the Mount, Jesus said, “Blessed are those who hunger and thirst for righteousness, for they shall be filled” (Matthew 5:6 NKJV).

Just as your parents want you to eat healthy food that will make you grow, God wants you to eat good spiritual food. Reading, thinking and memorizing Bible verses is one of the best ways to hear God’s voice. Watching certain television shows and playing video games for hours every day is like eating spiritual junk food. It will leave you with an empty feeling.

God will fill your life with happiness and joy when you obey him. Jesus came to give eternal life to all who trust him as their savior. He wants to give joy and a full life to all who listen to his voice and do what he says.

God designed us to live a full and happy life by depending on him. God promised to guide us when we trust in him (Proverbs 3:5-6).

Think about this: When you want to do God’s will more than you desire to eat and drink food, you will be very happy.

Ask this question: What kind of spiritual food are you eating today? 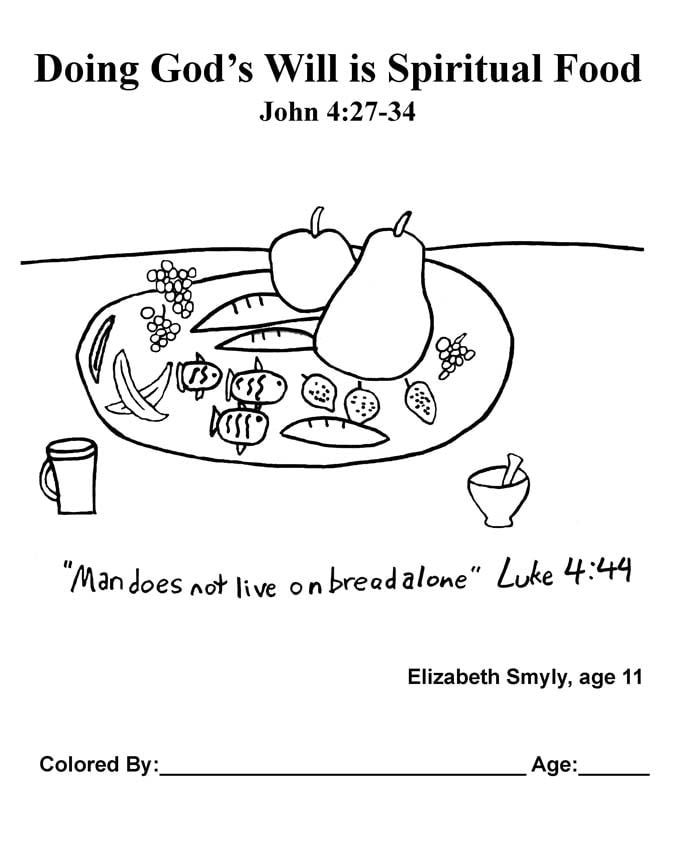