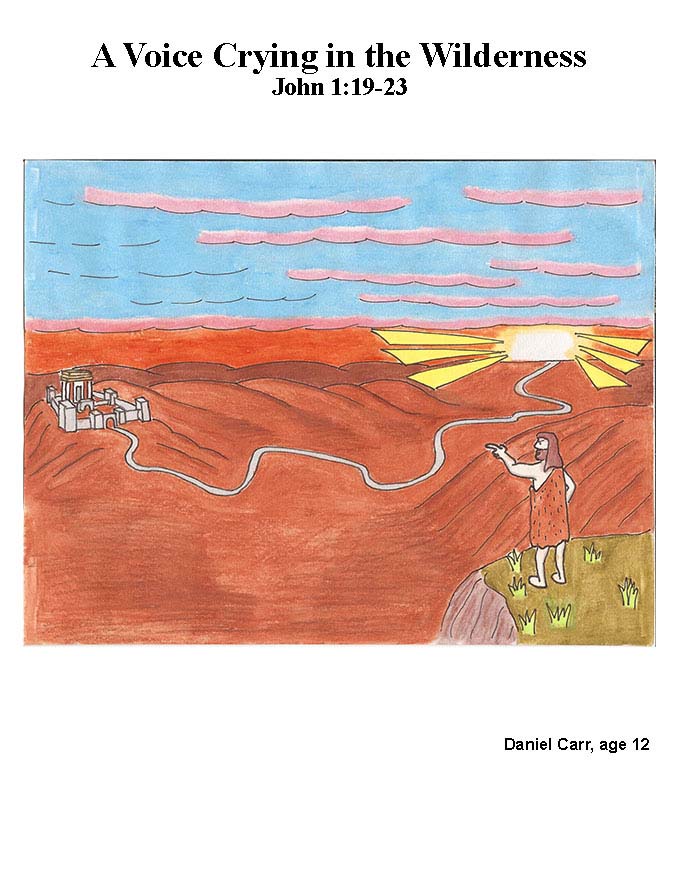 A Voice Crying in the Wilderness

John Tells About the Messiah

19 The Jewish leaders in Jerusalem sent some priests and Levites30 to John31 to ask him, “Who are you?” He told them the truth. 20 Without any hesitation he said openly and plainly, “I am not the Messiah.32”

He answered, “No, I am not the Prophet.”

22 Then they said, “Who are you? Tell us about yourself. Give us an answer to tell the people who sent us. What do you say about yourself?”

23 John told them the words of the prophet35 Isaiah:

“I am the voice of someone shouting in the desert:

30Levite Any of the men from the tribe of Levi, who helped the Israelite priests in the Holy Tent (Tabernacle) and Temple. In later periods some Levites worked for the civil government.

32Messiah A Hebrew word that has the same meaning as the Greek word Christ (see “Christ”). It was a title for the kings of God’s people in the Old Testament and for the special king God promised to send as a “savior” to defeat evil and establish the reign of God. Many prophets made it clear that this new kingdom would be eternal; that is, not only would the promised Messiah bring about a time of justice and right living among God’s people here on earth, but his kingdom would extend beyond this world to life forever with God. However, most Jews of the first century expected the Messiah to be a political ruler here on earth who would defeat the other nations and return the nation of Israel to a position of great glory and power. But God intended his Messiah to establish a new “Israel,” an eternal kingdom that would bless all the nations.

33Elijah A very important Israelite leader and prophet who spoke for God during a 25-year period ending about 850 b.c. In the time of Jesus, the Jews were expecting Elijah to come again before the Messiah. See Mal. 4:5-6.

35prophet A person who speaks a message from God. Many of the books in the Old Testament are messages spoken or written by “the prophets,” who were some of those God chose to speak for him. God often used dreams or visions to tell or show his prophets what they should say.

“John the Baptist said he was a crying voice because he was a Baptist.” Kaylin, 11

“John did not want them to think he was Jesus. Jesus was his cousin.” Morgan, 9

“John was trying to say to the Jews, I am just a person coming to tell about Jesus. I am no one important. I cannot save you from your evil ways. Only Jesus can. I have been chosen by God to come and speak to you.” Jessica, 8

“John was in the wilderness and lived with torn clothes and ate locusts.” Mitchell, 8

“We should do the same thing John the Baptist did. We should tell others about Christ. And if people torture us we should not deny Christ, even if it leads to a tragic end like John the Baptist’s.” Riesa, 11

When religious leaders asked John, “Who are you?” he said, “I am not the Christ.” He could have said, “I’m not the Messiah, but he’s my cousin.” John and Jesus were probably cousins. The Bible says John’s mother and Mary were relatives (Luke 1:36).

We live in a world where everyone wants to be important. Most people want others to think highly of them.

When we trust in the Lord Jesus Christ as our savior, God begins to change our minds about the way we think. Because Jesus is King of kings and Lord of lords, he should be the focus of our thinking. Our thinking should change from thinking about ourselves to thinking about him.

People who have good jobs often let their jobs define them. When asked to introduce themselves at a party, they might say, “I’m a doctor,” or “I’m a lawyer.”

John’s job and ministry was to tell the entire nation of Israel that the Messiah was coming. Even when people misunderstood him, John kept pointing people to Christ.

Next, religious leaders wanted to know if John was Elijah the prophet. In the last two verses of the Old Testament, God promises to send Elijah the prophet: “He will come before that great and terrible time of judgment from the Lord” (Malachi 4:5).

Like Elijah, John warned the people of Israel. The people of Elijah’s time worshiped idols. They rejected God. God performed miracles through Elijah to show that idols had no power (I Kings 18).

In John’s time, religious leaders invented many rules to keep people from breaking the law that God gave. Like Elijah, John warned the people of Israel to turn from their false ideas about God. John told them the Messiah was here. “Messiah” is the Hebrew word for “Christ.”

John the Baptist said this about himself: “I am the voice of a person shouting in the desert: ‘Make a straight road ready for the Lord.’”

John could have said a lot of things about himself, but he didn’t. He understood that his life was not about him. He became a voice shouting in the desert to point people to Christ. He tried to prepare people to receive the Lord Jesus Christ as their savior.

Think about this: True ministry points others to Jesus Christ, not to us.

Memorize this truth: “I am the voice of a person shouting in the desert: ‘Make a straight road ready for the Lord.’” (John 1:23).

Ask this question: Is your voice pointing people to Jesus Christ?