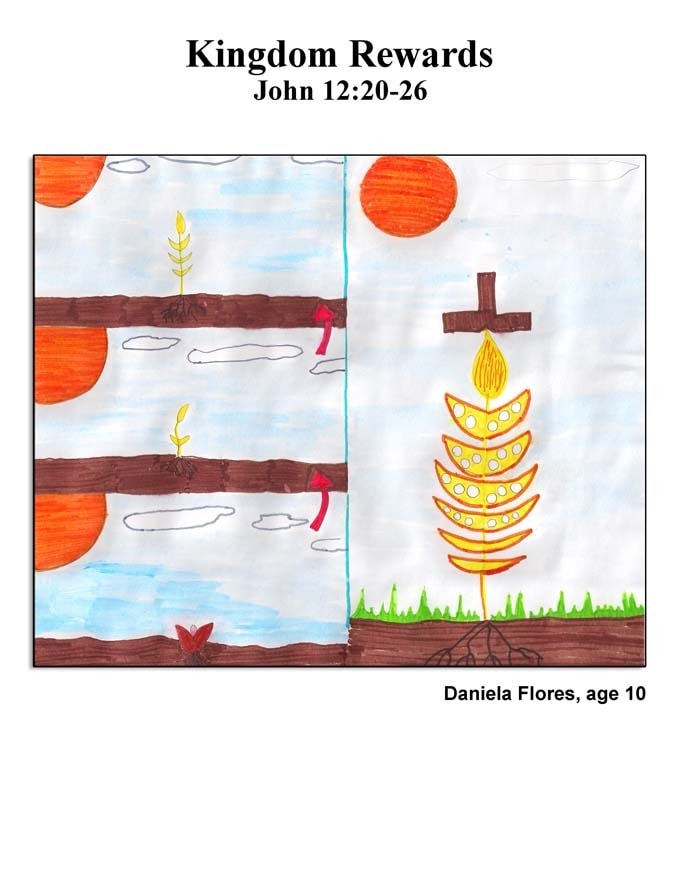 23 Jesus said to them, “The time has come for the Son of Man to receive his glory. 24 It is a fact that a grain of wheat must fall to the ground and die before it can grow and produce much more wheat. If it never dies, it will never be more than a single seed. 25 Whoever loves the life they have now will lose it. But whoever is willing to give up their life in this world will keep it. They will have eternal life. 26 Whoever serves me must follow me. My servants must be with me everywhere I am. My Father will give honor to anyone who serves me.

How do you hate your life in this world and earn rewards in God’s kingdom?

“By serving him and not following what other people say.” Roberto, 9

“If you love your life, you lose sight of God, but if you hate it, you can see God. God gives you a hard challenge to love him or not. Satan wants you to suffer.” Elijah, 10

“I am willing to die to myself, which means putting aside the love for myself and worldly things. Instead, I want to be a servant of Christ and focus on God’s kingdom, serving others, sharing the gospel and putting my faith in the Lord. Jesus made a promise to us that whoever serves God’s kingdom, God will honor him. That is the best thing that can happen to us.” Daniela, 10

“I don’t like how I act, think and draw. I just want to think good stuff inside, and read the Bible a lot and go to church. My humor is just bad. My love for my sis is bad. In God’s kingdom it is better and successful and powerful.” Izabella, 10

“I help out at church, and I help my loving parents. I love my enemies, family and needy people. I pray for my friends, family and other people. I help my friends when they’re hurt or sad. I’m willing to give most of my money to the needy all for our incredibly good God, who has never failed us nor will ever leave. He will always love us forever.” Elijah, 11

“The ways to earn rewards in heaven are to bring people to Christ, help people in need and praise God all the time. It is okay to abandon family and friends to preach to other people who are not saved, because you will see them eternally in heaven. It could be dangerous to enter other countries and preach about God, especially some parts in Africa and communist ruled countries. I consider anyone who preaches about God to unsaved people heroes, especially ones who manage to do it in dangerous countries.” Nicolas, 12

When Jesus was a young child, Gentiles (non-Jews) came from the east to honor the King of the Jews with gold, frankincense, and myrrh (Matthew 2:2). Here in these verses, we have Gentiles appearing again at the time near Jesus’ death.

These people who asked to see Jesus are called Greeks, but that does not mean they were from Greece. Anyone who was not Jewish and spoke Greek could be called a Greek.

Perhaps the reason the Greeks asked Philip if they could see Jesus is because “Philip” is a Greek name. The father of Alexander the Great was named Philip.

The Gentiles or Greeks wanted to see Jesus, but the Jews wanted to see a sign from Jesus (Matthew 12:38). Jesus performed many miracles that were signs. The Gospel of John is full of signs. What is the purpose of a sign? It points to something.

23 Jesus said to them, “The time has come for the Son of Man to receive his glory. 24 It is a fact that a grain of wheat must fall to the ground and die before it can grow and produce much more wheat. If it never dies, it will never be more than a single seed.

Jesus knew that millions of Gentiles would come to know him as the resurrection and the life. They would trust him as their savior. However, the mission that God the Father gave to Jesus was to the Jews. This mission would lead to the salvation of all people (Jew and non-Jew). In this same chapter, Jesus said, “And I, if I am lifted up from the earth, will draw all peoples to myself,” (John 12:32, NKJV).

When the Gentiles asked Philip if they could see Jesus, was that some kind of sign to Jesus? During Jesus’ ministry, we know that he told his disciples to minister only to Jews in Israel (Matthew 10:5 & 15:24). After Jesus’ death and resurrection, the next phase of ministry would take the gospel to the peoples of all nations (Book of Acts).

Jesus knew that he had to keep his mind and energy focused on completing his mission. When Jesus spoke about a grain of wheat falling into the ground and dying before it can grow to produce more wheat, he spoke about himself. Jesus died on the cross and rose from the dead so that millions of people might have eternal life by trusting in him.

25 Whoever loves the life they have now will lose it. But whoever is willing to give up their life in this world will keep it. They will have eternal life. 26 Whoever serves me must follow me. My servants must be with me everywhere I am. My Father will give honor to anyone who serves me.

Jesus gave his life on the cross. All who believe in him have eternal life. All believers will be with Jesus forever in his kingdom. Eternal life is a free gift that lasts forever.

Right now, Jesus is on his heavenly throne answering the prayers of believers. A time is coming when Jesus will return to Earth to establish his forever kingdom. Jesus is looking for believers to help him rule his kingdom. Are you preparing for that job now?

Who is going to help Jesus rule in his kingdom?

Jesus is going to honor forever those who serve him in this life. Your service will never earn entrance into Jesus’ kingdom. All enter the same way by believing that Jesus died for their sins and rose again. But not everyone in Jesus’ kingdom on Earth will have the same job.

Everyone in Jesus’ kingdom will have eternal life, but there will be different levels of enjoyment of that eternal life. Jesus promised eternal life to all who believe in him. Jesus promised an abundant life to all who follow him as his disciples. Not every believer or Christian is a disciple. Believing in Christ costs us nothing, but it cost Jesus everything. By his death on the cross, he paid the price for our sins that we could never pay. Following Jesus as a disciple will cost you. It begins by denying yourself.

“Jesus continued to say to all of them, ‘Any of you who want to be my follower must stop thinking about yourself and what you want. You must be willing to carry the cross that is given to you every day for following me,’” (Luke 9:23). What’s more important in this life, your interest or Jesus’ interest?

“Now then, we are ambassadors for Christ, as though God were pleading through us: we implore you on Christ’s behalf, be reconciled to God,” (2 Corinthians 5:20, NKJV).

If you take up your role as an ambassador for Christ now, you will find yourself in a leadership role in Christ’s coming kingdom. I think that the meetings and parties you’ll attend in God’s global kingdom will be a lot more interesting than if you had lived this life only for yourself. It takes faith to see yourself as God’s kingdom ambassador.

Listen to what the Apostle Paul wrote to young pastor Timothy: “We have to fight to keep our faith. Try as hard as you can to win that fight. Take hold of eternal life,” (I Timothy 6:12).

It’s one thing to have eternal life, but it’s another to take hold of it so that you see God’s purpose for your life. Even though most people live small, selfish lives, you can take the long view and live a big life full of God’s purpose. Learn to see what God is doing and be a part of it!

It’s a great adventure to take hold of eternal life. Right now, God’s kingdom on this Earth is mainly hidden. You can learn to move within that kingdom. Put God’s interest ahead of your own. God will reward you, but you may not see it until his kingdom is fully established on Earth. Be smart by taking the long view of life instead of the short, selfish view. 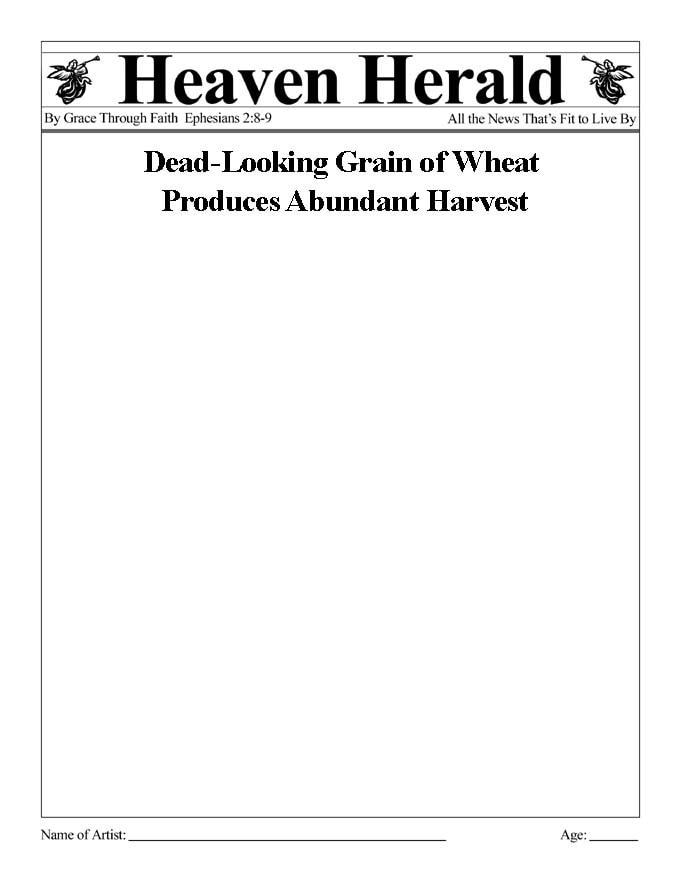 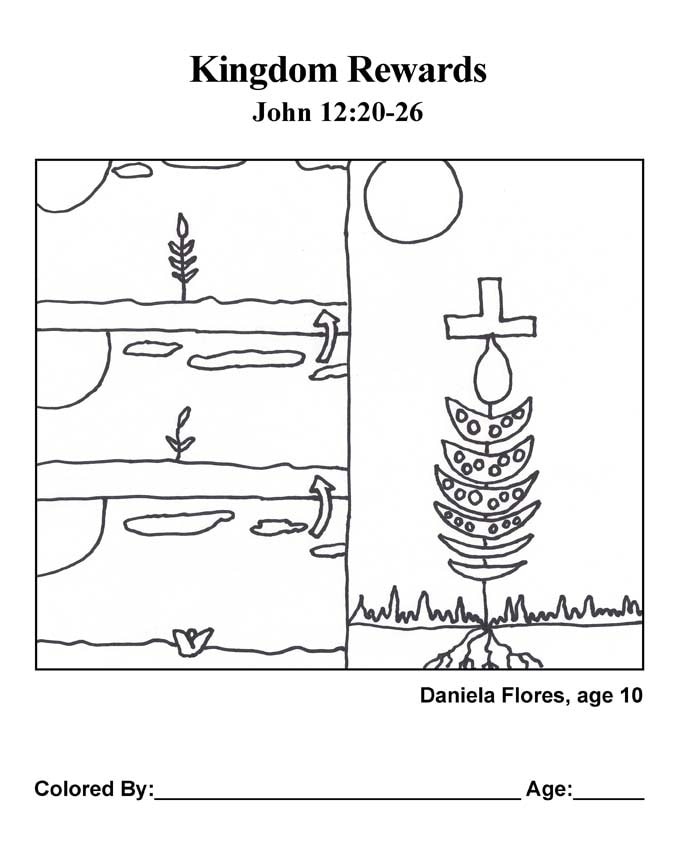