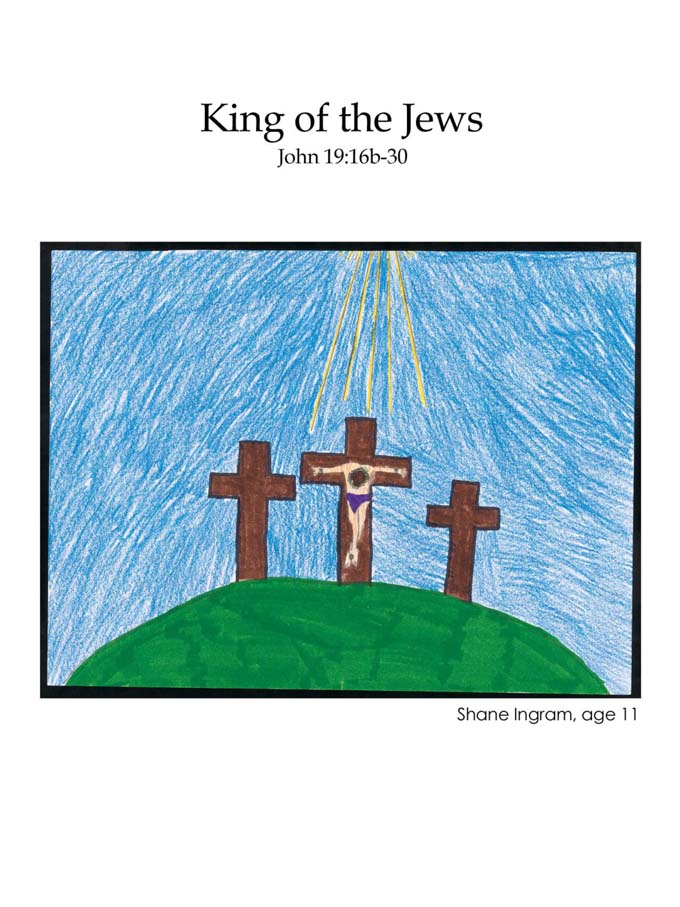 King of the Jews

Jesus Is Nailed to a Cross

The soldiers took Jesus. 17 He carried his own cross to a place called “The Place of the Skull.” (In Aramaicd the name of this place is “Golgotha.”) 18 There they nailed Jesus to the cross. They also nailed two other men to crosses. They put them on each side of Jesus with him in the middle.

19 Pilatee told them to write a sign and put it on the cross. The sign said, “JESUS OF NAZARETH, THE KING OF THE JEWS.” 20 The sign was written in Aramaic, in Latin, and in Greek. Many of the Jews read this sign, because the place where Jesus was nailed to the cross was near the city.

22 Pilate answered, “I will not change what I have written.”

23 After the soldiers nailed Jesus to the cross, they took his clothes and divided them into four parts. Each soldier got one part. They also took his tunic.f It was all one piece of cloth woven from top to bottom. 24 So the soldiers said to each other, “We should not tear this into parts. Let’s throw lotsg to see who will get it.” This happened to make clear the full meaning of what the Scripturesh say,

“They divided my clothes among them,
and they threw lots for what I was wearing.” i

So the soldiers did this.

25 Jesus’ mother stood near his cross. Her sister was also standing there with Mary the wife of Clopas, and Mary Magdalene. 26 Jesus saw his mother. He also saw the follower he loved very much standing there. He said to his mother, “Dear woman, here is your son.” 27 Then he said to the follower, “Here is your mother.” So after that, this follower took Jesus’ mother to live in his home.

28 Later, Jesus knew that everything had been done. To make the Scriptures come true he said, “I am thirsty.”k 29 There was a jar full of sour wine there, so the soldiers soaked a sponge in it. They put the sponge on a branch of a hyssop plant and lifted it to Jesus’ mouth. 30 When he tasted the wine, he said, “It is finished.” Then he bowed his head and died.

d 19:17 Aramaic The official language of the ancient Persian empire. Similar to Hebrew, it later became the common language of many Jews and is the spoken “Hebrew” referred to in the New Testament.

f 19:23 tunic A piece of clothing like a long undershirt.

How do you know God loves you?

“Because I get up every day, and I am able to see and move all my body parts.” Preston, 11

“I think having all those senses can make you happy. I can see flowers, I can taste cake, I can hear birds, I can feel my cat, and I can smell the flowers! God gave us all five senses, but some people only have four or three.” Sikas, 9

“I know God loves me because he gave me a smart mind. He gave my parents the brains to do their jobs that they are doing now so that I will be able to keep going to my school.” Chris, 9

“I know God loves me because he helps me with my requests and answers all my prayers.” Alex, 11

“I think you know God loves you because He died for us.” Jordan, 10

We know that God loves us because of the many things he has given us. Everything we have comes from God. He showers us with blessings: food, sunshine and rain, pets, friends, homes, parents and toys. All these things show us that God loves us.

But the greatest way we know God loves us is that Jesus died for us to save us from our sins. He did this so that we can live with him in heaven and let him live through us on Earth. What does it mean to believe in Jesus Christ for your salvation? It means you trust him alone to give you his never-ending life!

Martin Luther, a great man of God, once said faith is like the hand of a beggar reaching out to receive a gift. Have you received God’s gift of eternal life? Trust in Jesus alone to save you, and he will give you his life.

The Bible tells us, “I mean that you have been saved by grace because you believed. You did not save yourselves; it was a gift from God. You are not saved by the things you have done, so there is nothing to boast about” (Ephesians 2:8-9).

When Jesus was nailed to the cross, he said, “It is finished” (John 19:30). I’ve asked many people what they thought Jesus meant when he said this. Because Jesus himself said he came to die for our sins, it’s clear that he “finished” what he came to do (Mark 8:31).

Would you ever repeat a grade in school after you had passed all your tests? Jesus passed the biggest test of all. We deserve to suffer for all the things we’ve done wrong, but Jesus suffered for us. If Jesus finished the work for our salvation, is there anything we can do to add to his work? No way. All we can do is accept God’s offer of eternal life by believing in the Lord Jesus Christ as our savior.

Think About This: If you try to work for eternal life, you will never earn it.

Memorize This Truth: “I mean that you have been saved by grace because you believed. You did not save yourselves; it was a gift from God. You are not saved by the things you have done, so there is nothing to boast about” (Ephesians 2:8-9).

Ask These Questions: Have you received God’s gift of eternal life? Would you like to tell your friends the good news that Jesus finished his work so that they can live with him forever? 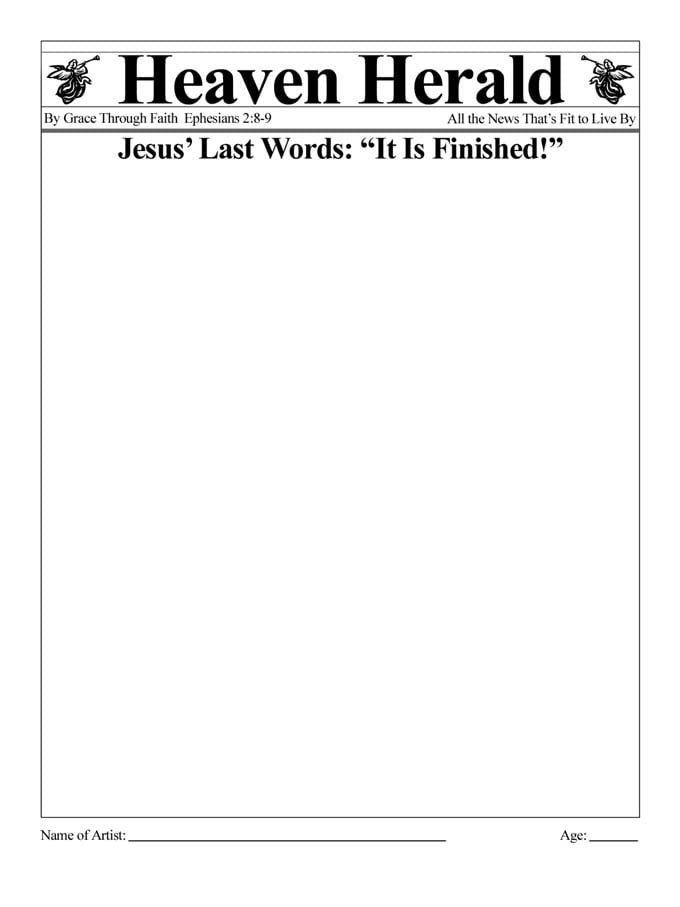 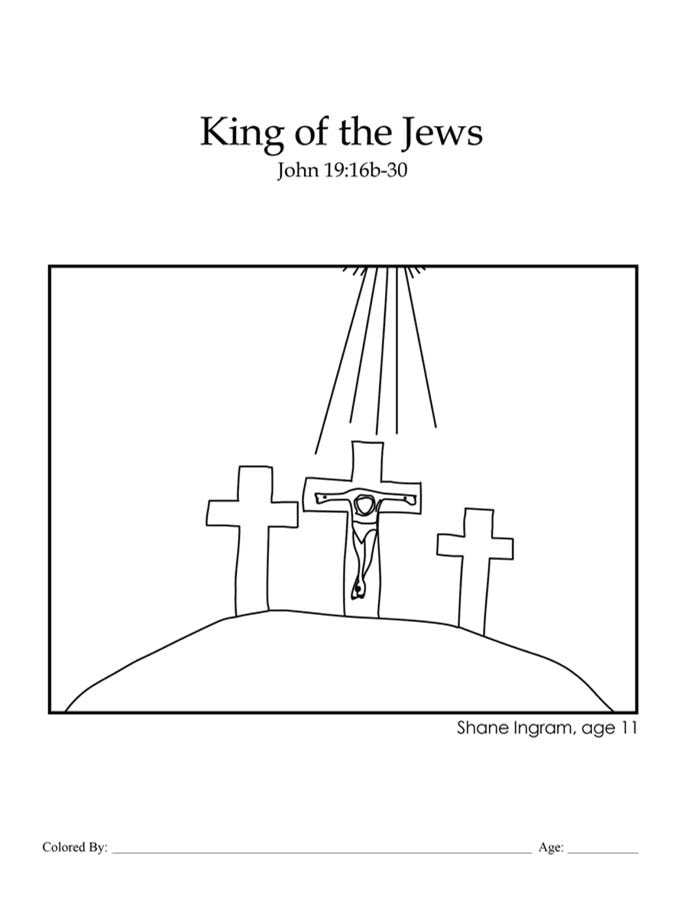