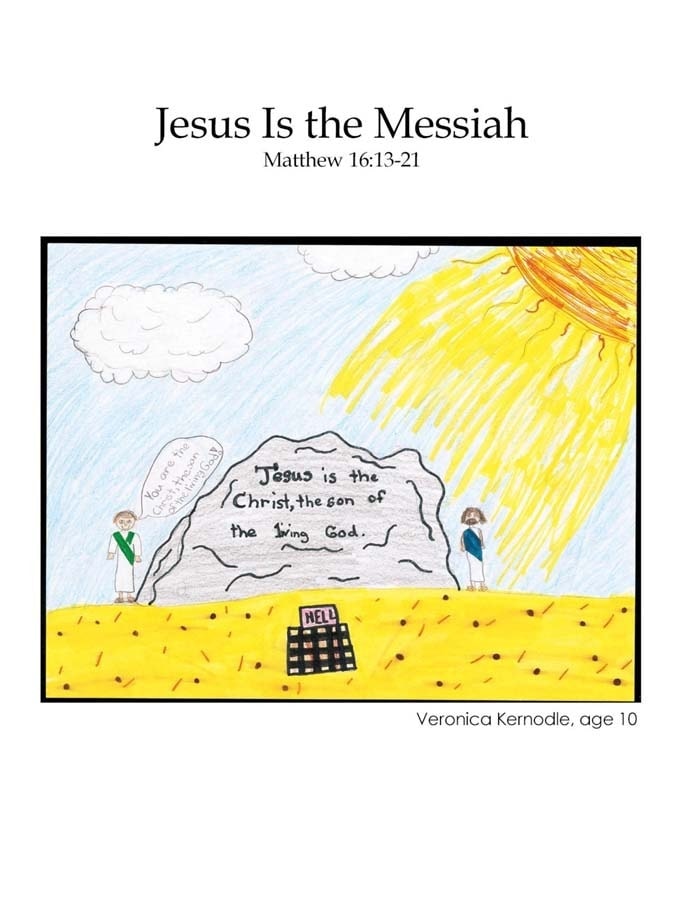 Jesus Is the Messiah

Peter Says Jesus Is the Christ

13 Jesus went to the area of Caesarea Philippi. He said to his followers, “Who do people say I amh?”

16 Simon Peter answered, “You are the Christ,m the Son of the living God.”

17 Jesus answered, “You are blessed, Simon son of Jonah. No one taught you that. My Father in heaven showed you who I am. 18 So I tell you, you are Peter.n And I will build my churcho on this rock. The power of deathpwill not be able to defeat my church. 19 I will give you the keys to God’s kingdom.q When you speak judgment here on earth, that judgment will be God’s judgment. When you promise forgiveness here on earth, that forgiveness will be God’s forgiveness.”r

20 Then Jesus warned his followers not to tell anyone he was the Christ.

Jesus Says He Must Die

j 16:14 Elijah A very important Israelite leader and prophet who spoke for God during a 25-year period ending about 850 b.c. In the time of Jesus, the Jews were expecting Elijah to come again before the Messiah. See Mal. 4:5-6.

l 16:14 prophet A person who speaks a message from God. Many of the books in the Old Testament are messages spoken or written by “the prophets,” who were some of those God chose to speak for him. God often used dreams or visions to tell or show his prophets what they should say.

m 16:16 Christ Literally, “Anointed,” a title that comes from the Old Testament ceremony in which perfumed oil was poured or rubbed on someone being appointed to a high office, especially that of prophet, priest, or king, to show that this person was chosen by God for that role. The Hebrew word is “Messiah,” a title used for Old Testament kings and for the one God would send as prophet, priest, and king to bring people back to a good relationship with him.

o 16:18 church Literally, “assembly” or “community,” the people who have been brought together as God’s family through their common faith in Jesus Christ. The word often refers to a group of believers who meet together or who live in the same area, but it is also used to mean the worldwide community of all believers in Christ.

q 16:19 God’s kingdom The “reign” or “rule” of God over all humanity—a time of great blessing for those who submit to him by accepting Jesus as the Christ (appointed king), who represents God’s kingdom on earth and was the perfect example of submission to the will of God. When people give control of their lives to Jesus, they become a part of God’s kingdom and begin to enjoy the blessings he has promised his people from the beginning. (Note that in Matthew this term also translates the Greek word “kingdom” by itself or the phrase, “the kingdom of the heavens,” which was used by Jews as a way to avoid saying the divine name.)

Is Peter the rock upon which the church is built?

“Jesus was telling Peter to take some rocks and build a church.” Cayleb, 6

“Jesus will build the church with rocks so it can be hard!” Jeremy, 6

“I think that Jesus was telling Peter that he (Peter) was the rock because his name means ‘rock.’” Hillary, 12

“I think Jesus meant that he was the rock and that we, his house, should build our lives upon him.” Ashley, 12

Jesus said he would build his church upon a rock. This brings up two questions. What is the church? Is it a building, or is it something bigger? Also, who or what is the rock?

The real meaning of the word “church” is assembly or gathering. It’s like a family. In fact, it is a family. It’s the family of God. Everyone who believes in Christ is part of this family. The fact that Jesus is the Christ is the rock upon which God’s entire church family is built.

The early Christians met in homes. Church buildings didn’t exist for several centuries. When Jesus spoke of building his church, he thought of all the people who would believe in him. Hey, that includes you and me!

Before Jesus said, “I will build my church on this rock,” he asked his disciples what people were saying about him. Jesus asked them who they thought he was. Peter answered, “You are the Christ, the Son of the living God.” These words are the foundation rock of God’s big church.

Some people think that the Apostle Peter is the rock upon which God’s big church is built. Here’s why. The name “Peter” comes from the Greek word “petros.” This means a stone or a piece of a rock.

Another word for “rock” comes from the Greek word “petra.” This means a large rock from which a smaller stone might break off. “Petra” was the word Jesus used for “rock” when he said, “I will build my church upon this rock.”

Jesus is the large rock upon which the church is built. Peter is a small rock. Jesus’ 12 apostles spread the good news throughout the world that Jesus is the Christ. Their work laid the foundation for the universal church (Revelation 21:14).

In other words, Jesus repeated what Peter said: “You are Peter (a piece of the rock), and on this rock (the fact that I am the Messiah, the Son of the living God), I will build my church.”

Think About This: If you believe Jesus Christ is the Son of God, you will meet with people from all nations from many centuries to worship the King of Kings and Lord of Lords (Revelation 5:9).

Memorize This Truth: “Simon Peter answered, ‘You are the Christ, the Son of the living God’” (Matthew 16:16).

Do you believe Jesus is the Christ, the Son of the living God?

How can you be a part of God’s plan to build his universal church?

How many people can you think of that need to know Jesus as their savior? 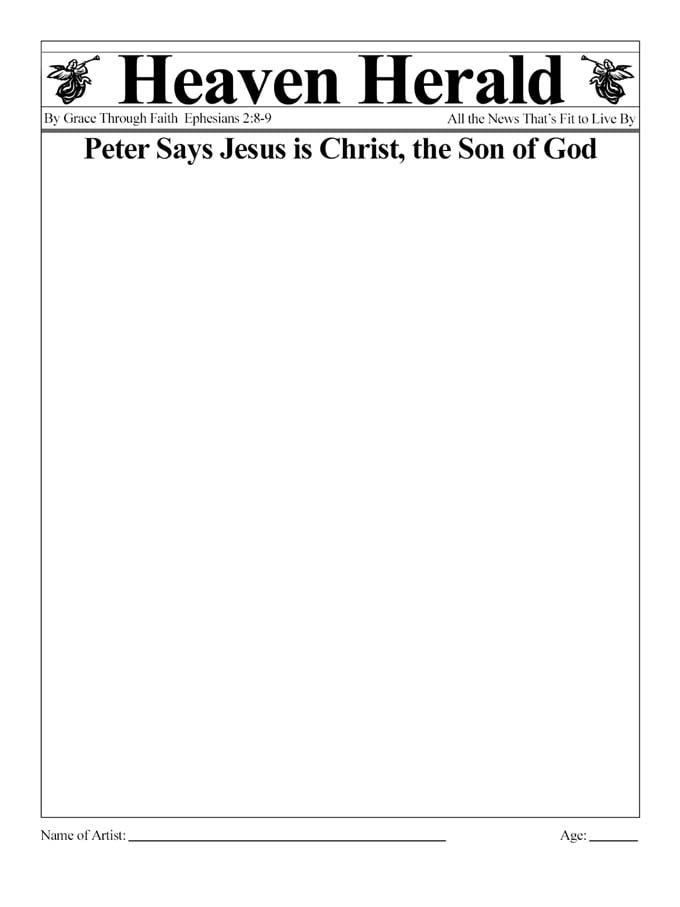 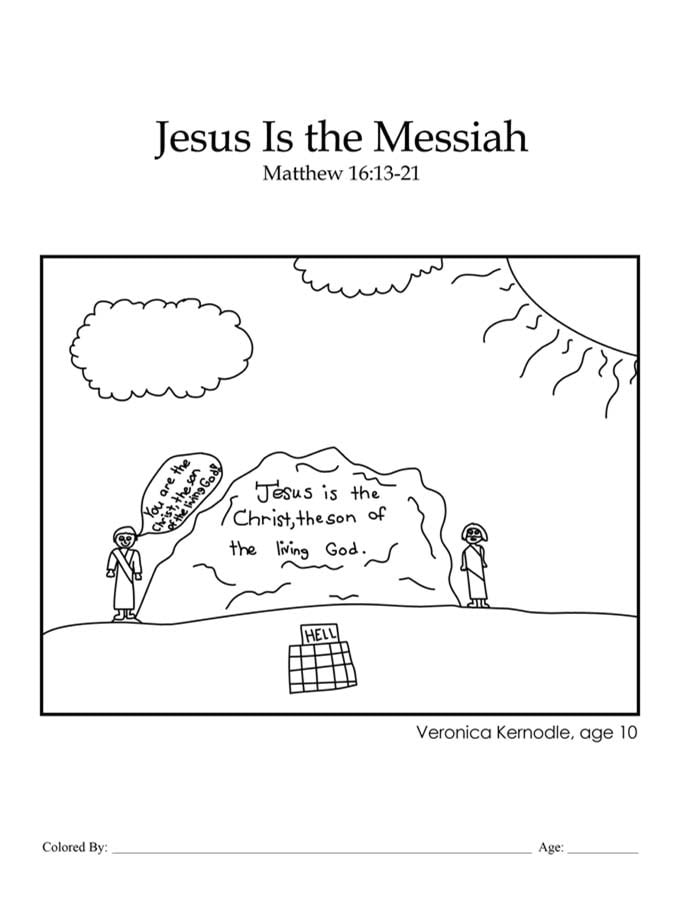