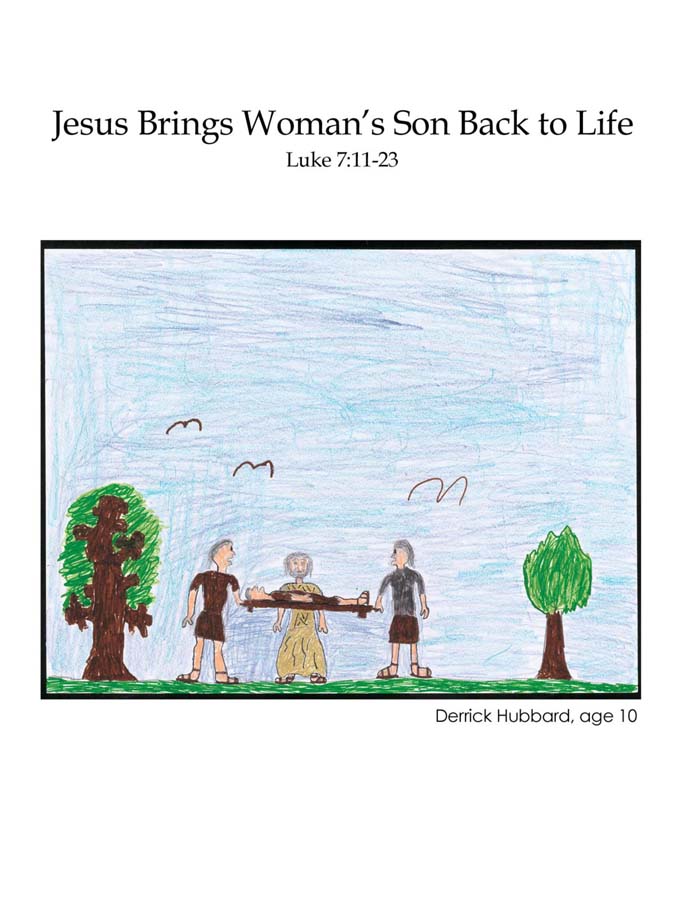 Jesus Brings a Woman’s Son Back to Life

11 The next day Jesus and his followers went to a town called Nain. A big crowd was traveling with them. 12 When Jesus came near the town gate, he saw some people carrying a dead body. It was the only son of a woman who was a widow. Walking with her were many other people from the town. 13 When the Lord saw the woman, he felt very sorry for her and said, “Don’t cry.” 14 He walked to the open coffin and touched it. The men who were carrying the coffin stopped. Jesus spoke to the dead son: “Young man, I tell you, get up!” 15 Then the boy sat up and began to talk, and Jesus gave him back to his mother.

16 Everyone was filled with fear. They began praising God and said, “A great prophete is here with us!” and “God is taking care of his people.”

17 This news about Jesus spread all over Judea and to all the other places around there.

18 John’s followers told him about all these things. John called for two of his followers. 19 He sent them to the Lord to ask, “Are you the one we heard was coming, or should we wait for someone else?”

20 So the men came to Jesus. They said, “John the Baptizerf sent us to you with this question: ‘Are you the one who is coming, or should we wait for someone else?’”

21 Right then Jesus healed many people of their sicknesses and diseases. He healed those who had evil spirits and made many who were blind able to see again. 22 Then he said to John’s followers, “Go tell John what you have seen and heard: The blind can see. The crippled can walk. People with leprosyg are healed. The deaf can hear. The dead are brought back to life. And the Good Newsh is being told to the poor. 23What great blessings there are for those who don’t have a problem accepting me.”

e 7:16 prophet A person who speaks a message from God. Many of the books in the Old Testament are messages spoken or written by “the prophets,” who were some of those God chose to speak for him. God often used dreams or visions to tell or show his prophets what they should say.

g 7:22 leprosy A very bad skin disease. The word in the text has a broad sense, which may include many different types of skin disease.

h 7:22 Good News In the Gospels this is usually the news about the coming of God’s kingdom (see above) or its representative Jesus Christ. In other places it is, more specifically, the news or message of God’s grace—that he has made a way through Jesus Christ for people to be made right with him and enjoy his blessings now and forever.

Why does God perform miracles?

“God performed miracles because some people said he wasn’t the Son of God.” John, 8

“God performed miracles so people would know that he was the Messiah. Also to help people.” Julie, 10

“God made those people better by words.” Melissa, 10

People were drawn to Jesus because of the marvelous things he did. He could make a blind man see, or a crippled person walk. He could make wine out of water and take a small basket of bread and fish and feed thousands of people. He cured people of their skin diseases. He brought people back to life (like the young man in this story) and forgave their sins.

No wonder people crowded around him—he could perform miracles! But Jesus didn’t do these things just to entertain people. He did them to show them that he was the Son of God and his Father lived in him. He said, “The Father lives in me, and he is doing his own work. Believe me when I say that I am in the Father and the Father is in me. Or believe because of the miracles I have done” (John 14:10-11).

Even though God can perform miracles, sometimes he chooses to let us go through something difficult and painful. John the Baptist had once seen Jesus coming toward him and said, “Look, the Lamb of God. He takes away the sins of the world!” (John 1:29). But now, he was in prison and sent two of his followers to ask Jesus if he was the promised Messiah.

How could a great man who once told everyone that Jesus was the Lamb of God question what he once preached? It’s easy to follow Jesus when everyone is jumping up and down with excitement because of a miracle. But what if you were in prison like John the Baptist? Would you start to have doubts? John did. Perhaps he thought if Jesus were the Messiah, he would get him out of jail and punish those who put him there.

All of us have ideas about what God should do. But who are we to tell God what to do? The test for all Christians is to trust God even though we may not understand what he is doing. This requires faith, humility and wisdom. Humble Christians do not question God’s goodness or wisdom. In our suffering, God has a purpose that is higher than our ability to understand. Maybe he wants to strengthen our faith. Perhaps he wants our faith in the midst of suffering to strengthen someone else’s faith.

Think About This: Jesus wants us to trust him whether or not we see him perform miracles.

Can I trust God even if I don’t understand what he is doing? 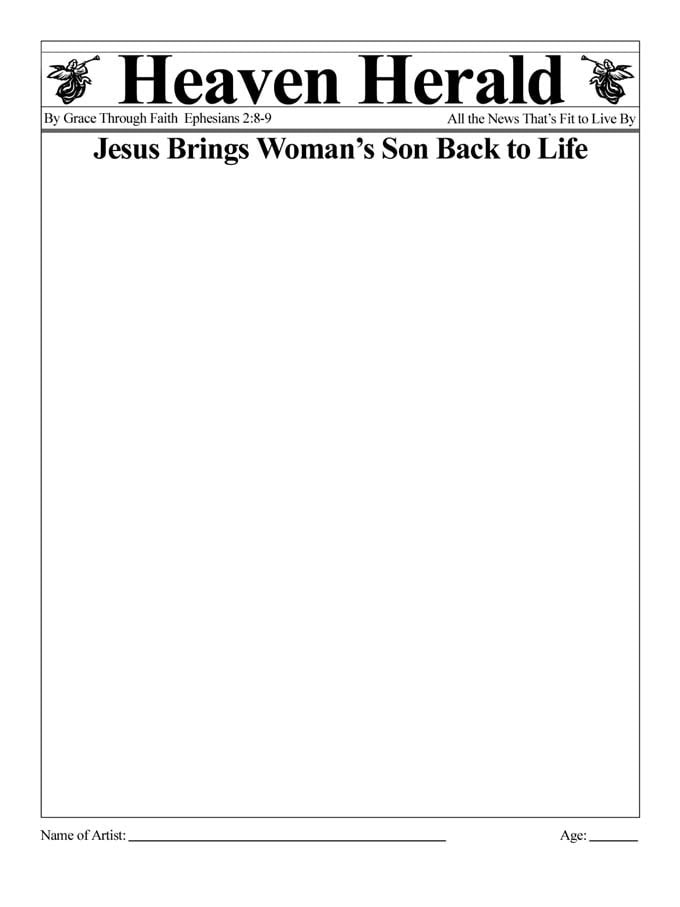 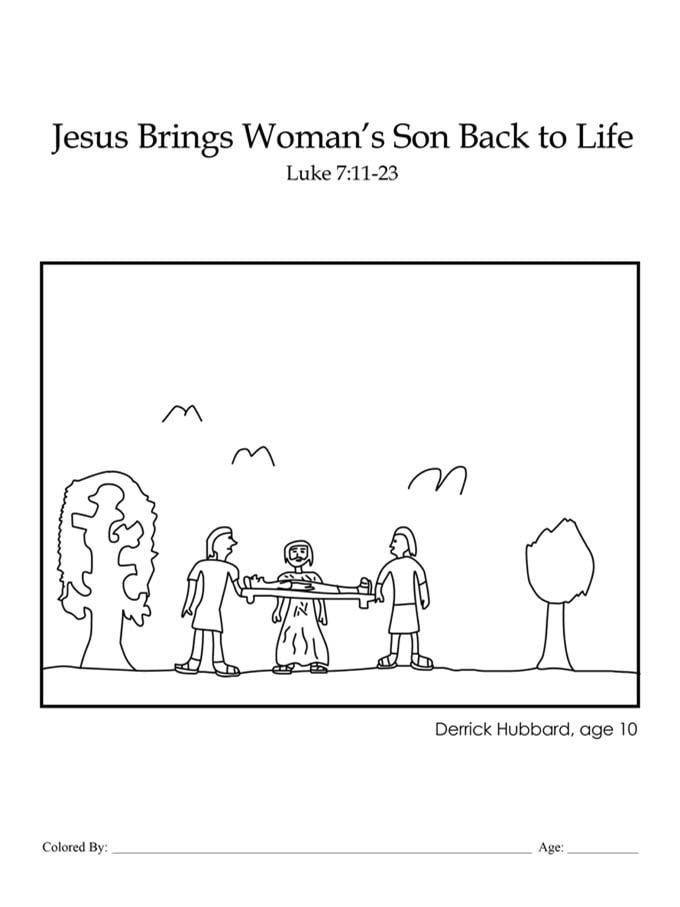