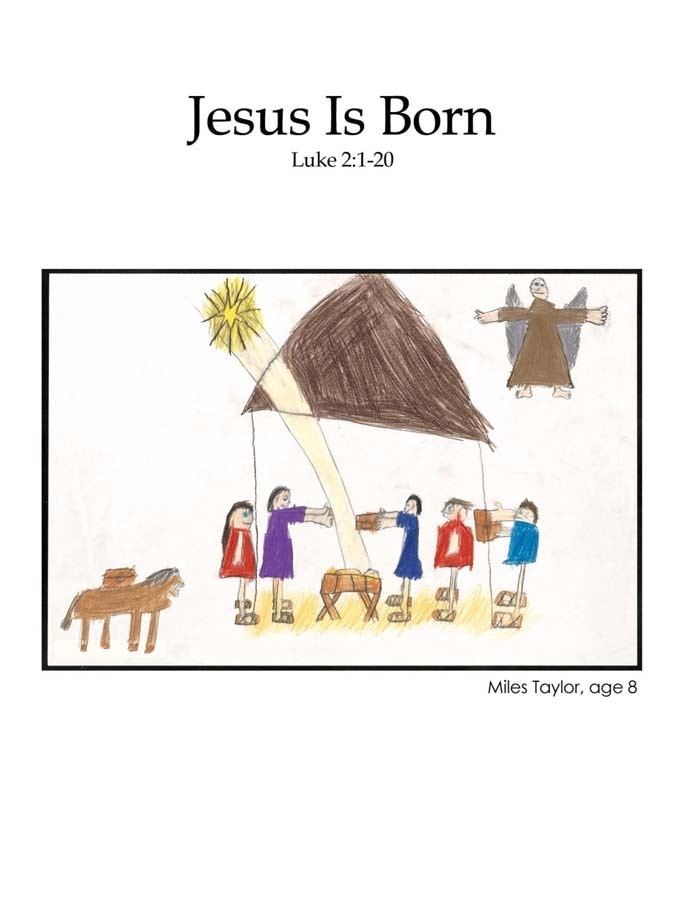 The Birth of Jesus Christ

1 It was about that same time that Augustus Caesara sent out an order to all people in the countries that were under Roman rule. The order said that everyone’s name must be put on a list. 2 This was the first counting of all the people while Quirinius was governor of Syria. 3 Everyone traveled to their own hometowns to have their name put on the list.

4 So Joseph left Nazareth, a town in Galilee, and went to the town of Bethlehem in Judea. It was known as the town of David.b Joseph went there because he was from the family of David. 5 Joseph registered with Mary because she was engaged to marry him. (She was now pregnant.) 6While Joseph and Mary were in Bethlehem, the time came for her to have the baby. 7 She gave birth to her first son. She wrapped him up well and laid him in a box where cattle are fed. She put him there because the guest room was full.

Some Shepherds Hear About Jesus

8 That night, some shepherds were out in the fields near Bethlehem watching their sheep. 9 An angel of the Lord appeared to them, and the gloryc of the Lord was shining around them. The shepherds were very afraid. 10 The angel said to them, “Don’t be afraid. I have some very good news for you—news that will make everyone happy. 11Today your Savior was born in David’s town. He is Christ,d the Lord. 12 This is how you will know him: You will find a baby wrapped in pieces of cloth and lying in a feeding box.”

13 Then a huge army of angels from heaven joined the first angel, and they were all praising God, saying,

and on earth let there be peace to the people who please him.”

15 The angels left the shepherds and went back to heaven. The shepherds said to each other, “What a great event this is that the Lord has told us about. Let’s go to Bethlehem and see it.”

16 So they went running and found Mary and Joseph. And there was the baby, lying in the feeding box. 17 When they saw the baby, they told what the angels said about this child. 18 Everyone was surprised when they heard what the shepherds told them. 19 Mary continued to think about these things, trying to understand them. 20 The shepherds went back to their sheep, praising God and thanking him for everything they had seen and heard. It was just as the angel had told them.

a 2:1 Caesar The name or title given to the emperor (ruler) of Rome.

b 2:4 David Israel’s greatest king, who ruled about 1000 years before Christ. Besides being a great military and political leader, he was a deeply spiritual man and a gifted musician, who wrote many of the Psalms. He made plans and arrangements for the building of the first Temple in Jerusalem (“the city of David”), which was actually completed by his son Solomon. The Scriptures said that a descendant of David would be God’s chosen messiah (king), who would establish an eternal kingdom. For that reason, Jesus is sometimes called “the Son of David.”

c 2:9 glory A word that refers to the special qualities of God. Often it means brightness, referring to the way he appears to people. Sometimes it means majesty or power, referring to a kind of greatness that cannot be compared to anything in human experience. It can also include the ideas of wealth, honor, fame, or respect, especially in expressions of praise.

d 2:11 Christ Literally, “Anointed,” a title that comes from the Old Testament ceremony in which perfumed oil was poured or rubbed on someone being appointed to a high office, especially that of prophet, priest, or king, to show that this person was chosen by God for that role. The Hebrew word is “Messiah,” a title used for Old Testament kings and for the one God would send as prophet, priest, and king to bring people back to a good relationship with him.

How would the angels announce Jesus’ birth today?

“The angel would announce his birth to common people. I think the angel would say the same thing except he would say, ‘You will find him in an abandoned building and lying in a cot.’” Samuel, 10

“The angel might appear before homeless people because they are not rich, important people. The angel might say Jesus had been born in a shack, a tent or an apartment.” Maria, 12

“The angels would go door-to-door and tell each family: ‘Don’t be afraid. Come and see!’” Carson, 6

Jesus was born in a humble place. At his birth, the angels put on an amazing show for a bunch of smelly shepherds and sheep out in a field. No one blew trumpets to announce Jesus’ birth to world leaders in important places.

God often works behind the scenes in humble places to do his work. Most people like to hang around rich and powerful people, but God loves to share his most precious spiritual gems with humble people. Quietly, the King of kings came to earth as a baby.

The angels used three names to announce Jesus’ birth. Each name tells us something about Jesus: Christ, Lord and Savior. “Christ” means Anointed One or Messiah. In Bible times, oil was poured on the head of the man who was being made king. The Holy Spirit anointed Jesus at his baptism. God spoke from heaven to say that he was pleased with his Son (Luke 3:22). “Lord” means that Jesus is God, and “Savior” means he died to save us from our sins. Jesus will save all who believe he died on the cross for their sins and rose from the dead.

The shepherds praised God and thanked him for baby Jesus, the Savior that God had promised. We, too, should always praise God and thank him for Jesus. The shepherds could only look forward to what Jesus would do for them. We can look back with even greater joy because the hard work that Jesus came to do has been finished. The One in whom God’s Holy Spirit lived gave himself as an offering for our sins and rose again to show that he had conquered death.

Memorize This Truth: “Today your Savior was born in David’s town. He is Christ, the Lord” (Luke 2:11).

Do you praise God and thank him for Jesus? 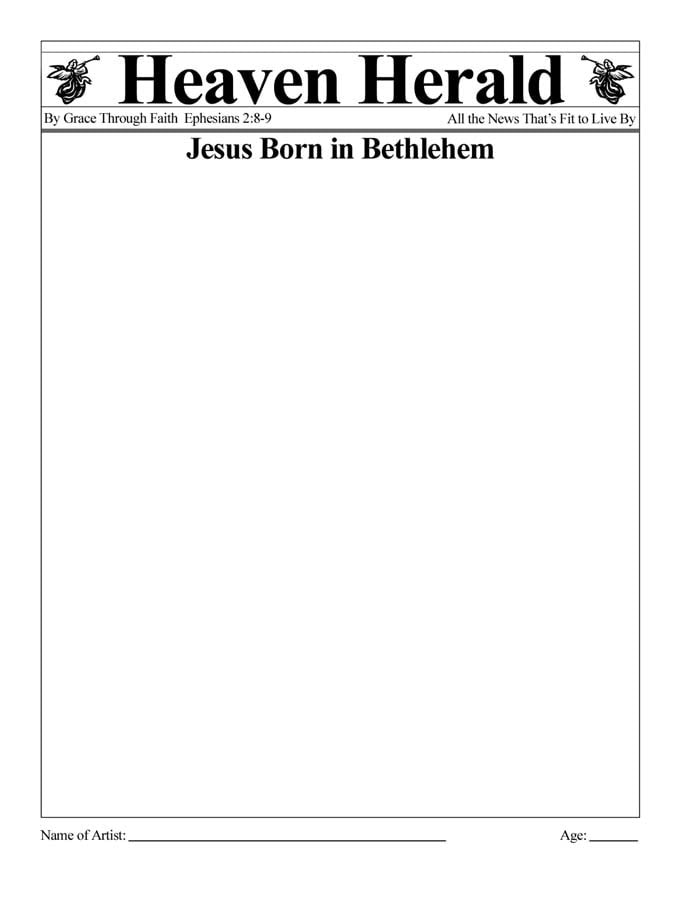 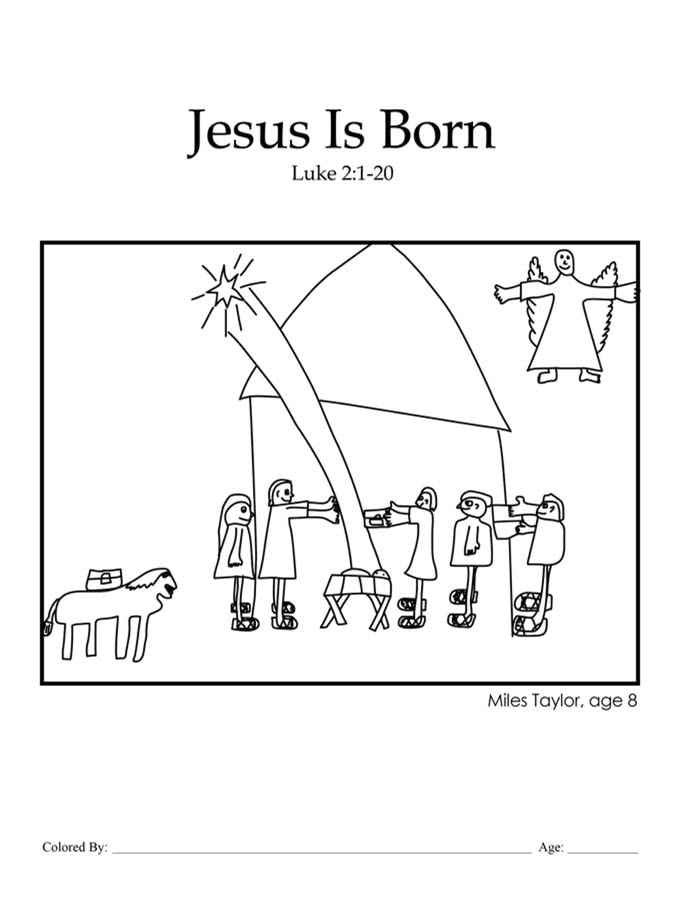