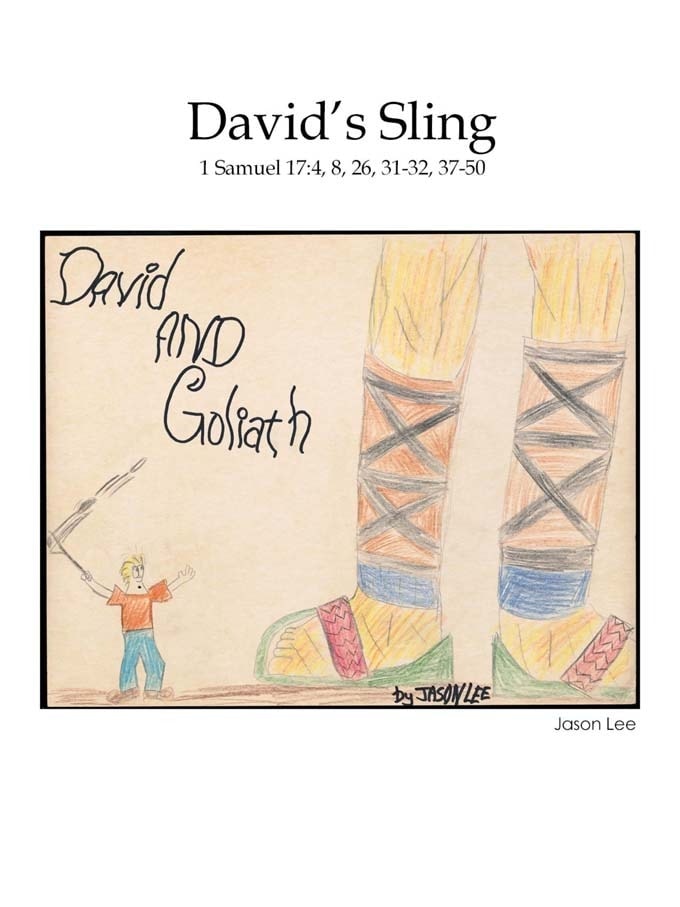 17 4 The Philistines had a champion fighter named Goliath, who was from Gath. He was over 9 feeta tall. Goliath came out of the Philistine camp.

8 Each day Goliath would come out and shout a challenge to the Israelite soldiers. He would say, “Why are all of your soldiers lined up ready for battle? You are Saul’s servants. I am a Philistine. So choose one man and send him to fight me.

26 David asked the men standing near him, “What did he say? What is the reward for killing this Philistine and taking away this shame from Israel? Who is this Goliath anyway? He is only some foreigner,f nothing but a Philistine. Why does he think he can speak against the army of the living God?”

31 Some men heard David talking. They took David to Saul and told him what David had said. 32 David said to Saul, “People shouldn’t let Goliath discourage them. I am your servant. I will go fight this Philistine.”

37The Lord saved me from the lion and the bear. He will also save me from this Philistine.”

Saul said to David, “Go and may the Lord be with you.” 38 Saul put his own clothes on David. He put a bronze helmet on David’s head and armorhon his body. 39 David put on the sword and tried to walk around. He tried to wear Saul’s uniform, but David was not used to all those heavy things.

David said to Saul, “I can’t fight in these things. I’m not used to them.” So David took them all off. 40 He took his walking stick in his hand and went to find five smooth stones from the stream. He put the five stones in his shepherd’s bag and held his slingi in his hand. Then he went out to meet the Philistine.

41 The Philistine slowly walked closer and closer to David. Goliath’s helper walked in front of him, carrying a large shield. 42 Goliath looked at David with disgust. He saw that David was only a handsome, healthyj boy.k 43Goliath said to David, “What is that stick for? Did you come to chase me away like a dog?” Then Goliath used the names of his gods to say curses against David. 44 He said to David, “Come here, and I’ll feed your body to the birds and wild animals.”

45 David said to the Philistine, “You come to me using sword, spear, and javelin. But I come to you in the name of the Lord All-Powerful, the God of the armies of Israel. You have said bad things about him. 46 Today the Lord will let me defeat you. I will kill you. I will cut off your head and feed your body to the birds and wild animals. And we will do the same thing to all the other Philistines too. Then all the world will know there is a God in Israel. 47 All the people gathered here will know that the Lord doesn’t need swords or spears to save people. The battle belongs to the Lord, and he will help us defeat all of you.”

48 Goliath the Philistine started to attack David. He slowly walked closer and closer toward David, but David ran out to meet Goliath.

49 David took out a stone from his bag. He put it in his sling and swung the sling. The stone flew from the sling and hit Goliath right between the eyes. The stone sank deep into his head, and Goliath fell to the ground—face down.

f 17:26 foreigner Literally, “uncircumcised.” This means a person who did not share in the agreement God made with Israel.

h 17:38 armor The special clothes soldiers wore to protect themselves in war.

i 17:40 sling A strip of leather used for throwing rocks.

What is the lesson of David and Goliath?

“Never underestimate the power of God or a boy.” Philip, 11

“If you’re going to wear armor, ask God for the armor.” Michael, 11

“If you believe in God, he will be there for you when you need him. And he will help you do things you usually aren’t capable of doing.” James, 11

“Pick on someone your own size.” Melissa, 9

What Goliaths are you facing? Fear of the dark? Being home alone? The bully at school? If you trust in God, you can defeat your fears. With God as your protector, you don’t have to fear anything.

Because David had trusted God when he protected the sheep, he prepared himself for the fight with Goliath. David told King Saul that the Lord had saved him from a bear and a lion. God always prepares us for big battles by allowing us to fight small ones first. If David had not seen the Lord save him from a bear and a lion, do you think he would have been ready to fight Goliath? I doubt it.

This world in which we live has many bullies like Goliath. They don’t care about people or God. They are selfish and proud. Bullies will make fun of you if you believe in God. These people want power, and they will do anything to get it.

Like all the men in the Israelite army, most people are scared of powerful, mean people. Even King Saul was afraid of Goliath. If you think you’re going to get help from scared people to fight a bully, forget about it. None of the soldiers helped. Even David’s oldest brother tried to discourage him. He said to David: “Why did you come here? Who did you leave those few sheep with in the desert? I know why you came down here. You didn’t want to do what you were told to do. You just wanted to come down here to watch the battle” (1 Samuel 17:28).

Have you ever had someone question your motivation? Sounds like big brother had a problem. David’s brother and the whole army were scared of Goliath. David refused to be scared because he believed the Lord could defeat the giant. David threw the rock with his sling, but the Lord gave him the victory.

To fight the Lord’s battles, you must know that God is with you. God has given you weapons like the shield of faith to protect you from people who say you’re proud when you are humble. If David had believed the lie his brother said about him being proud, do you think he would have defeated Goliath? Read Ephesians 6:10-18 and learn how to put on God’s armor. Get ready for battle!

Before David picked up five smooth stones to hurl at Goliath, King Saul tried to get him to wear his armor. People who are scared of bullies will always have ideas about how you should fight them. Don’t listen to them. Listen to God.

God doesn’t want us to be afraid. Living by faith in God is the opposite of living by fear. If you have trusted the Lord Jesus as your savior, remind yourself every day that you are a child of God. The Bible calls this putting on the helmet of salvation (Ephesians 6:17).

When you know God loves you, it’s like a helmet that protects the thoughts in your head from lies and fear. When David heard Goliath challenge the army of Israel to fight, he said, “Why does he think he can speak against the army of the living God?” (1 Samuel 17:26).

David knew he was a child of God. Even though Israel’s soldiers were afraid, David was sure they were the army of the living God. Before David picked up the first stone to throw at Goliath, he had already won the battle in his head.

Think About This: All battles must first be fought in your head. If you don’t think correctly, you will be scared when you should be brave.

Memorize This Truth: “All the people gathered here will know that the Lord doesn’t need swords or spears to save people. The battle belongs to the Lord, and he will help us defeat all of you” (1 Samuel 17:47).

In the past, how has God saved you from lies?
Can you think of a time when you were afraid, but you trusted God to make you brave?
Is God bigger than a fear you are facing now?
Can you think of how you might use another weapon in the armor of God listed in Ephesians 6:10-18? 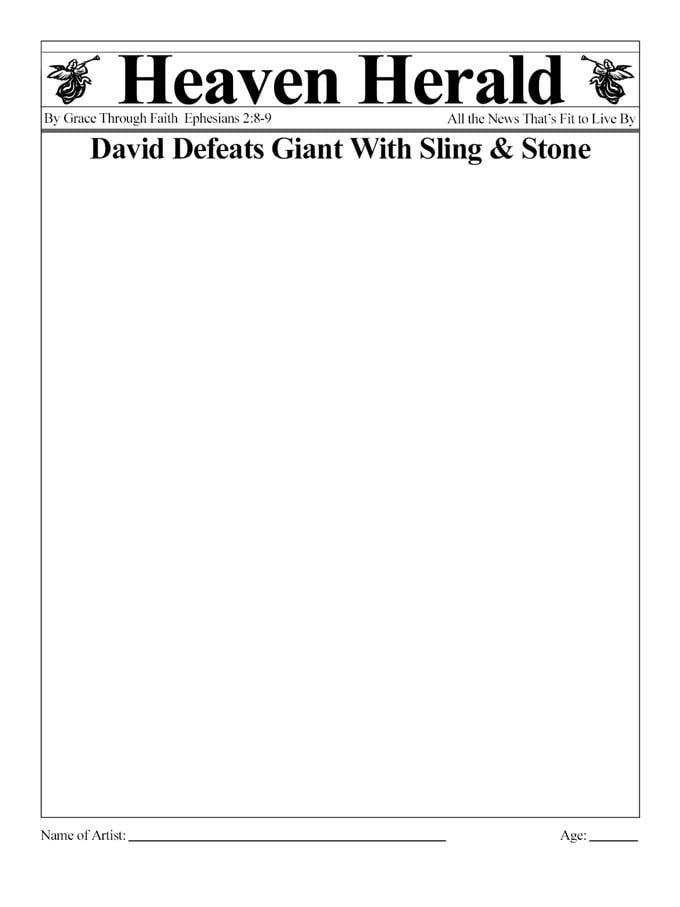 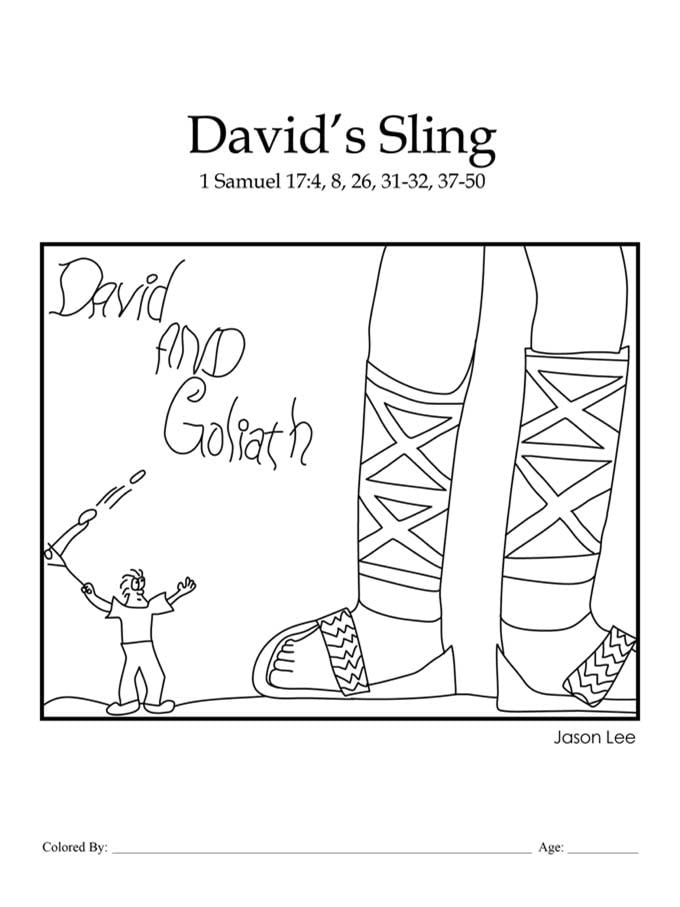