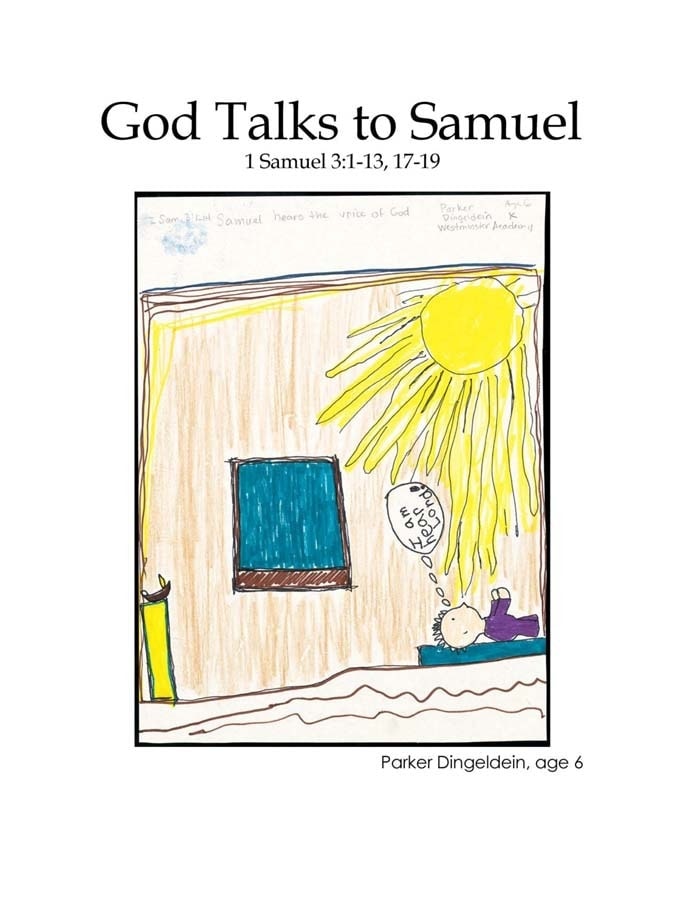 3 1 The boy Samuel was Eli’s helper and served the Lord with him. At that time the Lord did not speak directly to people very often. There were very few visions.a

2 Eli’s eyes were getting so weak that he was almost blind. One night he went to his room to go to bed. 3 The special lamp in the templeb was still burning, so Samuel lay down in the temple near where the Holy Boxc was.4 The Lord called Samuel, and Samuel answered, “Here I am.” 5 Samuel thought Eli was calling him, so he ran to Eli and said, “Here I am. You called me.”

So Samuel went back to bed. 6 Again the Lord called, “Samuel!” Again Samuel ran to Eli and said, “Here I am. You called me.”

7 Samuel did not yet know the Lord because the Lord had not spoken directly to him before.d

8The Lord called Samuel the third time. Again Samuel got up and went to Eli and said, “Here I am. You called me.”

Finally, Eli understood that the Lord was calling the boy. 9 Eli told Samuel, “Go to bed. If he calls you again, say, ‘Speak, Lord. I am your servant, and I am listening.’”

So Samuel went back to bed. 10 The Lord came and stood there. He called as he did before, saying, “Samuel, Samuel!”

Samuel said, “Speak. I am your servant, and I am listening.”

11 The Lord said to Samuel, “I will soon do things in Israel that will shock anyone who hears about them. 12 I will do everything I said I would do against Eli and his family, everything from the beginning to the end. 13 I told Eli I would punish his family forever. I will do this because Eli knew his sons were saying and doing bad things against God. But he failed to control them.

17 Eli asked, “What did the Lord say to you? Don’t hide it from me. God will punish you if you hide anything from the message he spoke to you.”

18So Samuel told Eli everything. He did not hide anything from Eli.

Eli said, “He is the Lord. Let him do whatever he thinks is right.”

19 The Lord was with Samuel while he grew up. He did not let any of Samuel’s messages prove false.

a 3:1 vision Something like a dream used by God to speak to people.

b 3:3 temple This could mean the Holy Tent at Shiloh where people went to worship the Lord or a larger area where they put the Holy Tent.

c 3:3 Holy Box Or traditionally, “Ark of the Covenant.” The special box kept in the Most Holy Place of the Israelite Holy Tent and, later, the Jerusalem Temple. It contained the stone tablets with the Ten Commandments written on them, which were evidence or “proof” of the agreement between God and his people.

d 3:7 the Lord … him before Literally, “the word of the Lord had not yet been revealed to him.”

How does God talk to you?

“God can talk by thunder because thunder is really God talking out loud.” Dianna, 8

“God can talk to us when there is something he wants us to do.” Chad, 8

“God used to talk out loud so that people could hear him like any other person. Now he doesn’t do that. He talks to us through our hearts. It sounds pretty hard to do, but God can do anything. God sort of puts the idea in our heads, and somehow, it just works!” Hannah, 9

Sometimes God talks directly to people. God spoke to Moses on a mountaintop. He called to Samuel in the middle of the night – talk about goose bumps! No wonder Samuel asked Eli who was calling him. God had a message he wanted Samuel to deliver.

Often God speaks to us in the ordinary events of our lives. If we don’t pay attention, we will not hear what God is trying to say. Who knows? Maybe God wants to give you a message to deliver. Maybe he’s calling you to help a friend. God has something for each of us to do. Before you act, make sure you hear God’s voice first. If you’re not sure God is talking, you might want to follow Samuel’s example by checking with someone who has known God for a long time.

God also talks to us through the Bible. Think of the Bible as a love letter from God. When God speaks directly to the hearts of his people, his words will never disagree with his love letter, the Bible. A lot people say they want to know God’s will, but they don’t spend time to learn what he has already said in the Bible. God is always speaking through his Word. If you want to hear God speak, read the Bible, think about it, memorize it and obey what it says. Why should God speak to you in a special way like he did with Samuel if you don’t take time to let him speak to you through the Bible?

Samuel was a boy when God spoke to him in a special way. It doesn’t matter how young or old you are. God will speak to anyone who loves him. Don’t make the mistake of thinking you have to be grown up to hear the voice of God. If you have trusted the Lord Jesus as your savior, the Holy Spirit lives in you (1 Corinthians 6:19). He is our helper and teacher. Speaking of the Holy Spirit, Jesus said, “But the Helper will teach you everything and cause you to remember all that I told you” (John 14:26).

Think About This: God will speak to anyone who will listen.

Memorize This Truth: “And now in these last days, God has spoken to us again through his Son” (Hebrews 1:2a).

How has God spoken to you in the past week? What did he say?
Does the Bible agree with what you thought you heard from God? 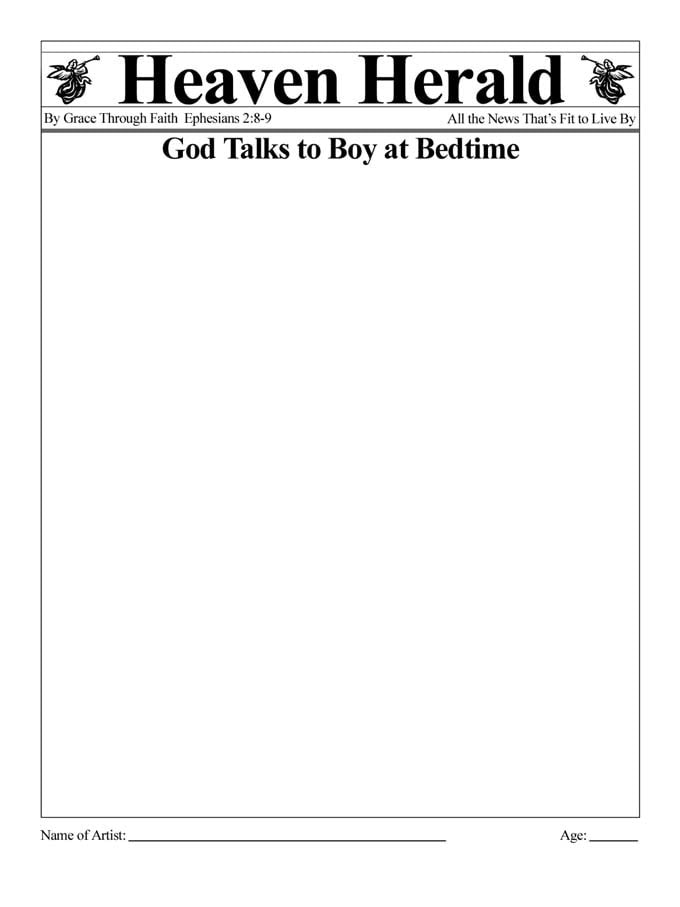 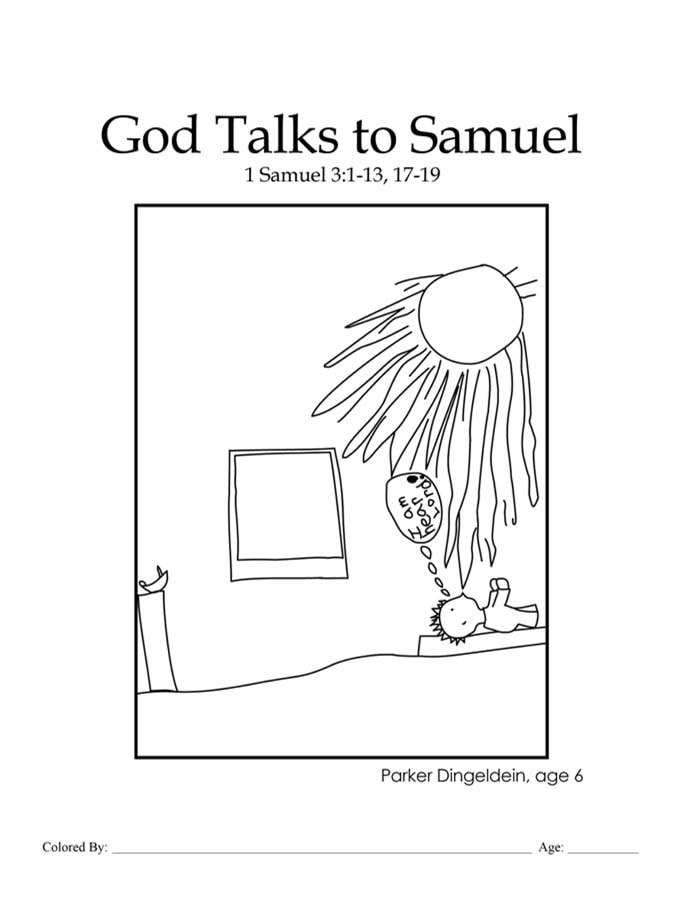