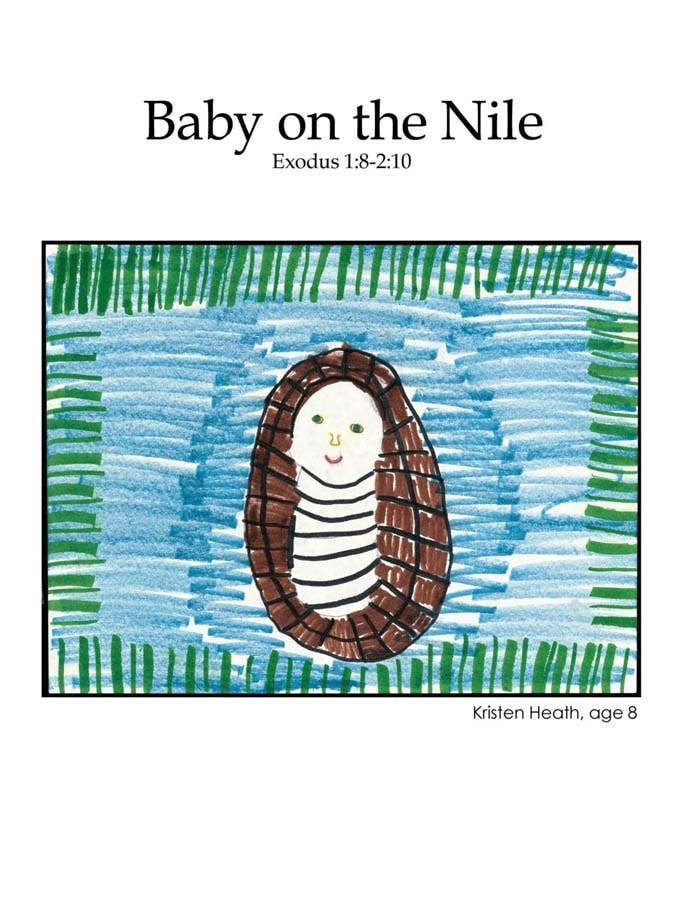 Baby on the Nile

Trouble for the Israelites

1 8 Then a new king began to rule Egypt. He did not know Joseph. 9 This king said to his people, “Look at the Israelites. There are too many of them, and they are stronger than we are! 10 We must make plans to stop them from growing stronger. If there is a war, they might join our enemies, defeat us, and escape from the land!”

11 The Egyptians decided to make life hard for the Israelites, so they put slave masters over the people. These masters forced the Israelites to build the cities of Pithom and Rameses for the king. The king used these cities to store grain and other things.

The Nurses Who Followed God

15 There were two Hebrewa nurses who helped the Israelite women give birth. They were named Shiphrah and Puah. The king of Egypt said to the nurses, 16 “You will continue to help the Hebrew women give birth to their children. If a girl baby is born, let the baby live. But if the baby is a boy, you must kill him!”

17 But the nurses trustedb God, so they did not obey the king’s command. They let all the baby boys live.

18 The king of Egypt called for the nurses and asked them, “Why did you do this? Why did you let the baby boys live?”

19 The nurses said to the king, “The Hebrew women are much stronger than the Egyptian women. They give birth to their babies before we can go to help them.” 20-21 The nurses trusted God, so he was good to them and allowed them to have their own families. The Hebrews continued to have more children, and they became very strong. 22 So Pharaohc gave this command to his own people: “If the Hebrew women give birth to a baby girl, let it live. But if they have a baby boy, you must throw it into the Nile River.”

2 1 There was a man from the family of Levi who decided to marry a woman from the tribe of Levi.a 2 She became pregnant and gave birth to a baby boy. The mother saw how beautiful the baby was and hid him for three months. 3 She hid him for as long as she could. After three months she made a basket and covered it with tarb so that it would float. Then she put the baby in the basket and put the basket in the river in the tall grass.4 The baby’s sister stayed and watched to see what would happen to the baby.

5 Just then, Pharaoh’s daughter went to the river to bathe. She saw the basket in the tall grass. Her servants were walking beside the river, so she told one of them to go get the basket. 6 The king’s daughter opened the basket and saw a baby boy. The baby was crying and she felt sorry for it. Then she noticed that it was one of the Hebrewc babies.

7 The baby’s sister was still hiding. She stood and asked the king’s daughter, “Do you want me to go find a Hebrew woman who can nurse the baby and help you care for it?”

So the girl went and brought the baby’s own mother.

9The king’s daughter said to the mother, “Take this baby and feed him for me. I’ll pay you to take care of him.”

So the woman took her baby and cared for him. 10 The baby grew, and after some time, the woman gave the baby to the king’s daughter. The king’s daughter accepted the baby as her own son. She named him Mosesd because she had pulled him from the water.

b tar Or “pitch,” a thick oil that must be heated to become liquid and that is used to seal the boards with which ships are built.

d 2:10 Moses This name is like a Hebrew word meaning “to pull or draw out.”

Do babies go to heaven when they die?

“Babies go to heaven because that’s where they belong.” Kelly, 6

“God will take them to heaven even if they haven’t reached the age of accountability.” Elizabeth, 9

“Babies go to heaven because they are not old enough to understand sin, Jesus Christ and the Holy Spirit.” Molly, 12

Long ago in Bible times a king ordered that all baby boys had to be killed. What a horrible, horrible thing to do! Those Hebrew baby boys died because the king was afraid. It’s not a happy thought, but babies do die, even today. Jesus loved children and even said that people had to become like little children to enter his heavenly kingdom (Matthew 19:14).

The Bible tells us that God made us and knew us before we were born (Psalm 139:13-16). If God makes babies and knows them from the time they are inside their mothers, he has plans for them and loves them.

King David’s baby son became very ill and died. Afterward, David didn’t question God’s decision, even though he prayed and prayed for his son to live. Speaking of his baby boy who died, David said, “Some day I will go to him, but he cannot come back to me” (2 Samuel 12:23). David knew he would see his son again in heaven.

Sometimes people say they want to do the will of God, but they want to know what will happen first. Most of the time, God doesn’t show us everything he is going to do. He wants us to obey him even if we can’t see what will happen. Do you think the mother of Moses knew that the king’s daughter would adopt the baby she hid in the bushes? Do you think she knew that her son would lead the Hebrews out of slavery? I seriously doubt it!

We cannot predict what God will do when we obey him. His plan is much bigger than what we can see. When astronauts go into space, they see the entire world. God can see our complete lives and the lives of other people. He has a bigger picture, and he knows what he wants to do. That is why we have to obey God and trust him to work everything out for our good and his glory.

God is a genius! He does many things at the same time. The most amazing part of this Bible story is that the king’s daughter adopted baby Moses. Remember, this is the daughter of the man who gave the command to kill all the Hebrew baby boys. The man who would lead the Hebrews out of slavery grew up in the king’s palace. Amazing!

The Bible says, “But our Lord will laugh at them. He will make sure they get what they deserve” (Psalm 37:13). Just make sure he’s not laughing at you!

Normally, we should obey government rulers. But, if the government passes a law that commands us to murder babies, we should disobey. Because every person is created in the image of God, no one has the right to murder another person.

There’s another lesson here. The Egyptians made the Hebrew slaves work very hard. They treated them unfairly because they were afraid of them. God blessed the Hebrews, and they continued to grow in number.

God can bless you even when people are mean to you. The world is full of people like the Egyptian slave owners. They are afraid. Fearful people do strange things. The only way to drive fear out of our lives is to let God’s love into our hearts. The Apostle John said that God is love, and where God is there is no fear “because God’s perfect love takes away fear” (1 John 4:18).

Think About This: As Baby Moses floated down the Nile River, God protected him in a basket that someone wove. God wants to protect you by weaving your life into a pattern that will bring blessing to you and glory to him.

Memorize This Truth: “And the mother and father of Moses hid him for three months after he was born. They did this because they had faith. They saw that Moses was a beautiful baby. And they were not afraid to disobey the king’s order” (Hebrews 11:23).

Can you think of laws the government might pass that you should disobey?

What would you say to a government official who wanted to know why you disobeyed a law? 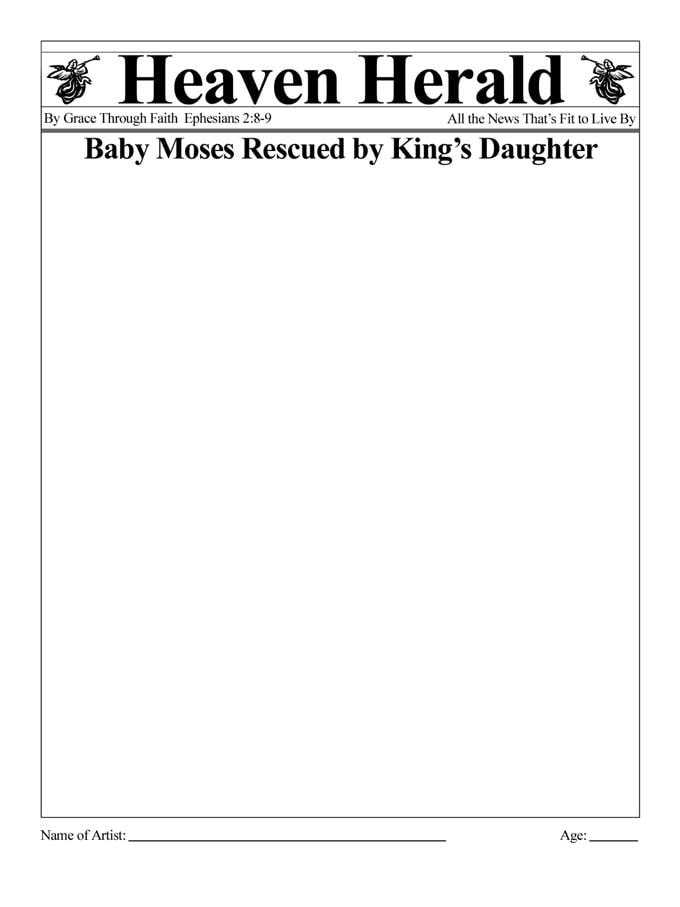 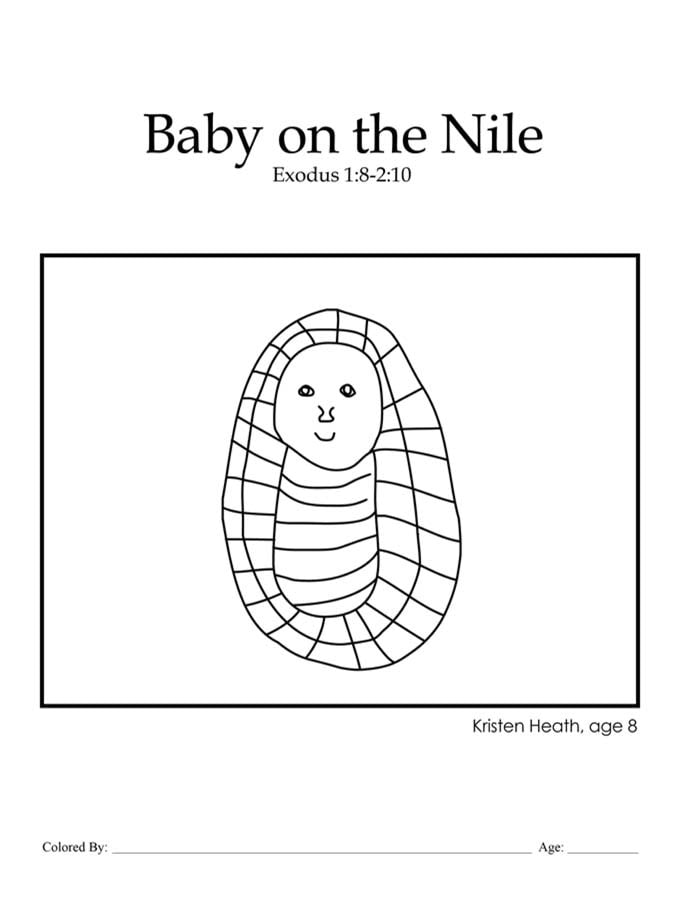 Subscribe to to receive an email containing three devotional columns for free each week.

Thank you for subscribing.

The form collects name and email so that we can add you to our email list for the Kids Talk About God Devotional Bible Lessons. We protect and manage your submitted data!