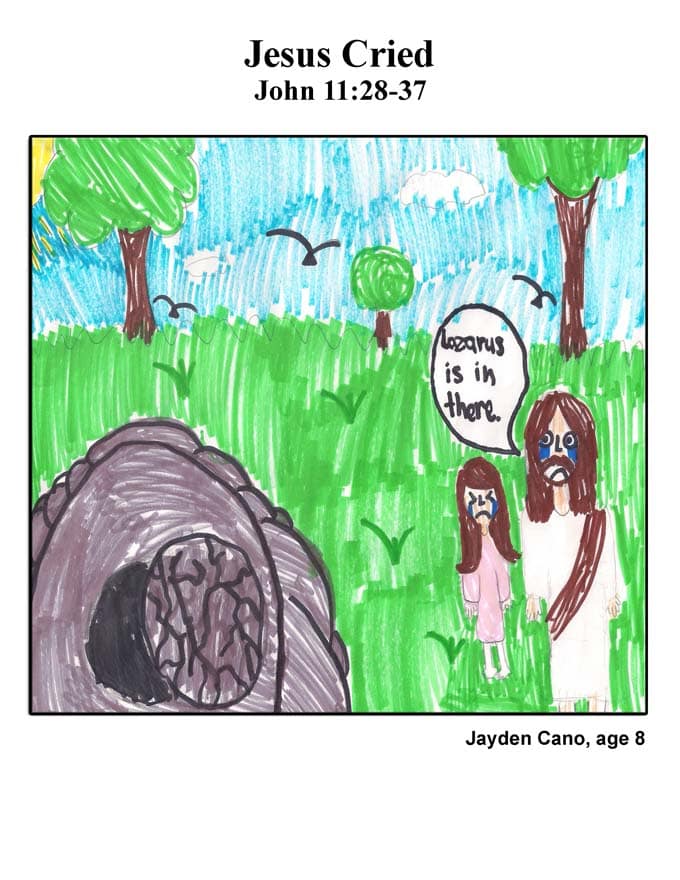 28 After Martha said these things, she went back to her sister Mary. She talked to Mary alone and said, “The Teacher is here. He is asking for you.” 29 When Mary heard this, she stood up and went quickly to Jesus. 30 He had not yet come into the village. He was still at the place where Martha met him. 31 The Jews who were in the house comforting Mary saw her get up and leave quickly. They thought she was going to the tomb to cry there. So they followed her. 32 Mary went to the place where Jesus was. When she saw him, she bowed at his feet and said, “Lord, if you had been here, my brother would not have died.”
33 When Jesus saw Mary crying and the people with her crying too, he was very upset and deeply troubled. 34 He asked, “Where did you put him?”
They said, “Lord, come and see.”
35 Jesus cried.
36 And the Jews said, “Look! He loved Lazarus very much!”
37 But some of them said, “Jesus healed the eyes of the blind man. Why didn’t he help Lazarus and stop him from dying?”

What do you think makes Jesus cry?

“Lazarus died and he was Jesus’ buddy.” Samuel, 5

“When he remembers that the bad people nailed him on the cross.” Carlos, 5

“Because his friend died and Jesus was very sad. Jesus and the girls were crying because they loved Lazarus and he was dead. Jesus told Lazarus to get up, and he got up!” Sophia, 6

“Because he loves us and he died on the cross for us.” Galilea, 6

“Jesus cries when people are sick or suffering. He cries because he loves us, and when we don’t know him, he is sad.” Mollie Mae, 6

“I believe that what makes Jesus cry is that Lazarus died. And because we sin. He cries because sin is bad. He died on a cross for us, and He saved us.” Nathalie, 7

28 After Martha said these things, she went back to her sister Mary. She talked to Mary alone and said, “The Teacher is here. He is asking for you.” 29 When Mary heard this, she stood up and went quickly to Jesus. 30 He had not yet come into the village. He was still at the place where Martha met him. 31 The Jews who were in the house comforting Mary saw her get up and leave quickly. They thought she was going to the tomb to cry there. So they followed her.

Even through Mary’s brother had died and people were at her house to comfort her, Mary left her house quickly when Martha told her Jesus wanted to see her. Mary didn’t let her grief keep her from seeing Jesus. She knew that Jesus would provide her the most comfort.

No matter how bad you feel, keep looking to Jesus. Neither Mary nor her sister had any idea that Jesus would raise their brother from the grave that day. However, they both knew they should go to Jesus.

32 Mary went to the place where Jesus was. When she saw him, she bowed at his feet and said, “Lord, if you had been here, my brother would not have died.”

Yes, it’s true that Jesus could have prevented Lazarus from dying. There are a lot of things that God can prevent, but he doesn’t stop them from happening. That doesn’t mean he causes them to happen. We live in a world that is suffering from the effects of sin. Death is one of those effects. The world and even the science community don’t have an answer for death. God does.

Jesus purposely waited two more days before coming to Bethany. He knew that God would be glorified more by raising Lazarus from the grave than by preventing him from dying.

When Mary sees Jesus, she falls at his feet. The three times we see Mary of Bethany in the Bible, she is always at Jesus’ feet.

The first time, Mary sits at the feet of Jesus to listen to him teach while her sister, Martha, is busy preparing a meal. When Martha complains about Mary not helping, Jesus tells her that Mary made the better choice to listen to him (Luke 10:38-42). Listening to Jesus is always the best choice!

Immediately before Jesus’ death, we see Mary pouring out expensive perfume on the feet of Jesus and wiping it off with her hair. When Judas said that the perfume should have been sold to help poor people, Jesus disagreed. He said Mary’s beautiful act of love would be a memory for her (John 12:1-8).

Be like Mary of Bethany. When you love Jesus, you will create many memories of things you have done to honor him. These memories will follow you forever. Jesus will reward you for even a cup of cold water given in his name (Matthew 10:42).

33 When Jesus saw Mary crying and the people with her crying too, he was very upset and deeply troubled.

The New Living Translation of the Bible did a much better job of translating this verse from the original Greek language in which it was written: “When Jesus saw her weeping and saw the other people wailing with her, a deep anger welled up within him, and he was deeply troubled.”

The idea behind the Greek word (embrimáomai) comes from a horse snorting with anger. To translate this word as Jesus getting “very upset” is not strong enough. When Jesus saw Mary weeping and those with her wailing, “a deep anger welled up within him.” Jesus got angry and mad, but why?

The Bible doesn’t tell us exactly why Jesus got mad, but we know from the Bible text what he saw that made him angry. In the weeping of Mary of Bethany and those with her, Jesus saw and felt the destructive nature of death. Death is not part of God’s original plan. Death entered this world through sin.

Can anyone really know the depths of Jesus’ anger over death? Can anyone fully understand the agony that Jesus faced as he would battle death in having all of our sins poured out on him? As Jesus saw Mary of Bethany crying, he saw that death had won again. It made him angry.

Furthermore, Jesus always got angry at religious hypocrisy. Remember when Jesus made a whip and drove the money changers out of the temple? The temple was supposed to be a sacred place for worship. The Jews had turned it into a marketplace for exchanging money and selling animals for sacrifice at the temple.

Mary of Bethany is one of Jesus’ most beloved followers, but she is surrounded by professional mourners. During the time in which Jesus lived, it was not unusual for people to mourn for a week when someone died. The combination of Mary’s real grief over the death of her brother combined with the fake grief of the professional mourners probably also made Jesus mad.

After Jesus raised Lazarus from the dead, several of these Jews went to Jerusalem to tell the religious leaders what happened. The leaders made plans to kill Jesus (John 11:53).

“Jesus cried” is the shortest verse in the entire Bible, but it’s one of the most telling. In Isaiah’s prophecy about God’s Messiah, the prophet predicted that Jesus would be a “man of sorrows,” (Isaiah 53:3). Why do you think Isaiah called Jesus a man of sorrows?

There is a great mystery in how Jesus as almighty God set aside the glories of heaven and entered this world as a helpless baby. He went from the highest position to the lowest. As man, Jesus experienced limitations he never knew in heaven.

We can’t imagine the sorrows Jesus, as perfect God and man in one person, knew from living among sinful people. Jesus could see sin where we don’t even notice it.

Without ever sinning himself, Jesus felt the effects of sin much more than anyone who ever lived. It’s like the difference between walking through a thorny forest with shoes and without shoes. The person walking barefoot will feel the pain of thorns much more than the one wearing shoes.

Don’t think that Jesus’ sorrow was only for himself. He saw the sorrow that sin brought to those around him. His love for sinful people caused him the most sorrow. Even though Jesus did many miracles of healing and offered eternal life to all who would believe in him, most people rejected him.

Much of Jesus’ sorrow did not come from insults and injuries that he suffered, but from seeing how people destroyed themselves. Remember what Jesus said when he looked over Jerusalem: “O Jerusalem, Jerusalem! You kill the prophets. You stone to death those that God has sent to you. Many, many times I wanted to help your people. I wanted to gather them together as a hen gathers her chicks under her wings. But you did not let me,” (Matthew 23:37).

Jesus is sorrowful for those who reject him. Jesus wanted the Jewish people to live with him forever in the New Jerusalem. By rejecting Jesus, they destroyed the one opportunity they had to be happy forever in Jesus’ kingdom. This made Jesus sorrowful.

Imagine that you worked all your life to discover the cure for cancer. You offer the cure freely to all who are dying of cancer. Most people make fun of you because they don’t believe your cure will work. How would you feel?

Even though Jesus was a man of sorrows, this doesn’t mean he was always sad. Jesus had a well of joy springing up in him that allowed him to go through suffering that we can’t imagine.

“He suffered death on a cross. But he accepted the shame of the cross as if it were nothing because of the joy he could see waiting for him. And now he is sitting at the right side of God’s throne,” (Hebrews 12:2b).

What was that joy? Have you ever seen a man on his wedding day? There is a lot of joy there. The man has been waiting to marry a woman whom he loves.

Jesus is looking forward to that day when he will marry his bride. Guess who the bride is?

If you have trusted the Lord Jesus as your savior, you are part of the bride of Christ. The joy of being one with us helped Jesus endure his suffering on the cross. God’s grand purpose is to have a people among Jews and non-Jews that he can call his own (Revelation 19:7-9). 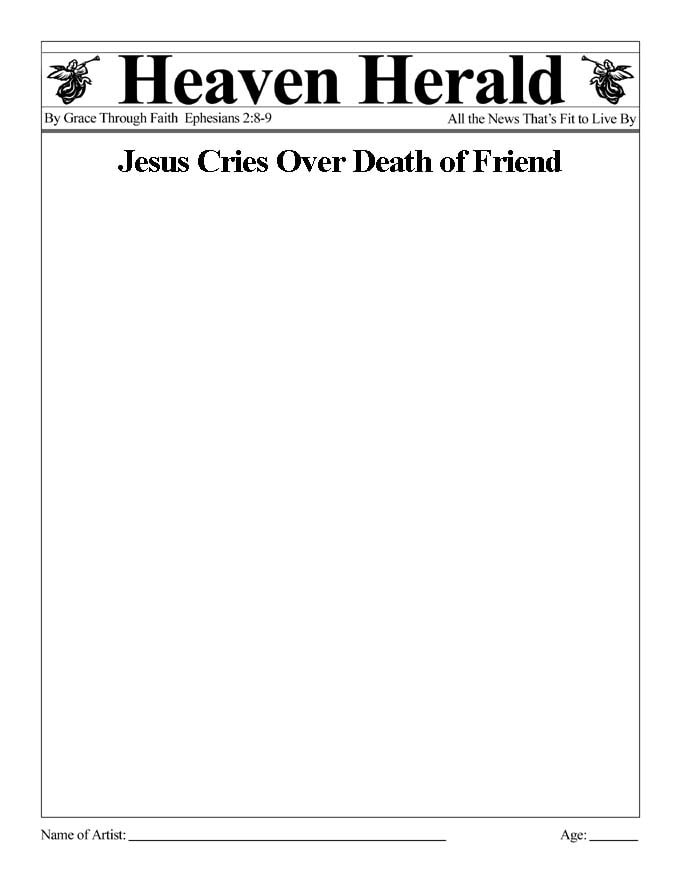 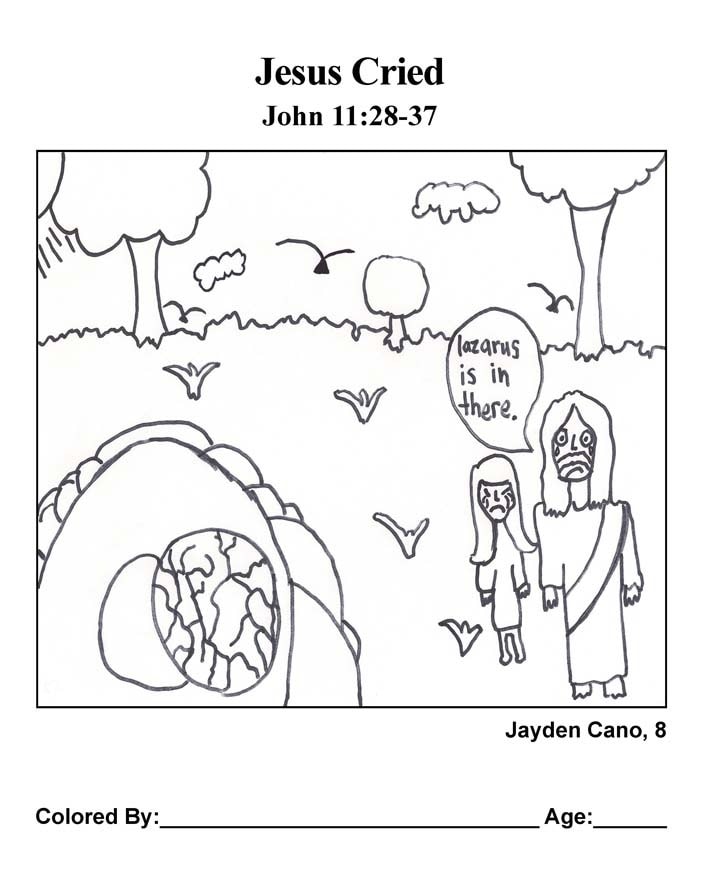