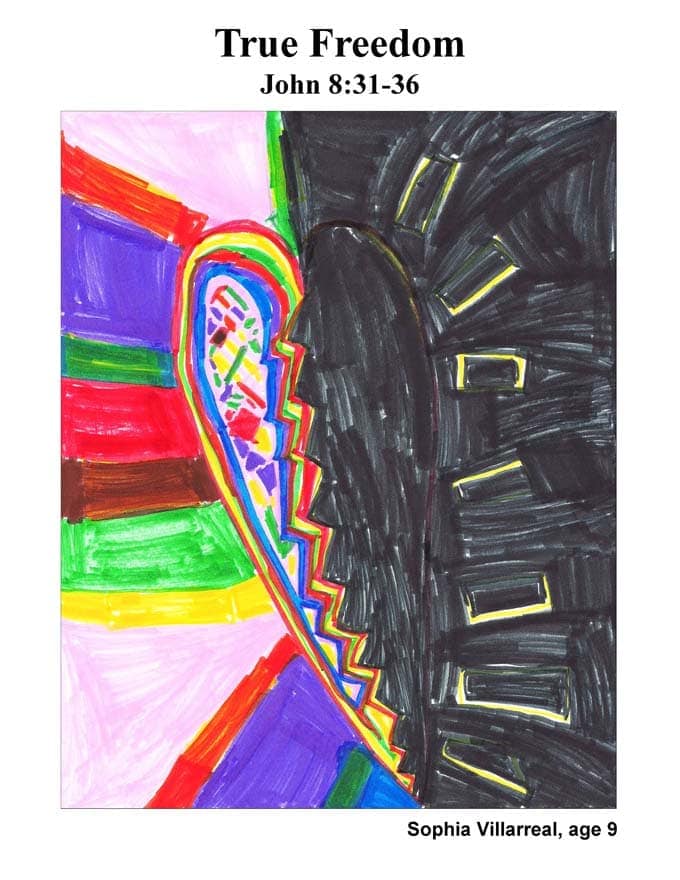 Jesus Talks About Freedom From Sin

31 So Jesus said to the Jews who believed in him, “If you continue to accept and obey my teaching, you are really my followers. 32 You will know the truth, and the truth will make you free.”
33 They answered, “We are Abraham’s descendants. And we have never been slaves. So why do you say that we will be free?”
34 Jesus said, “The truth is, everyone who sins is a slave—a slave to sin. 35 A slave does not stay with a family forever. But a son belongs to the family forever. 36 So if the Son makes you free, you are really free.

How does remaining in God’s word make you free?

“You may be free from slavery, but you can still be a slave of sin. You will be free by holding onto God’s Word. Then you will know the truth and the truth will set you free.” Caleb, 10

“The thing that people sometimes think is that Christians have a lot of rules and can’t do many things. In reality, by remaining in God’s Word, we have freedom from one of the best things you can have freedom from: sin. Sin is something we all have because we are all sinners, and none of us are perfect. But with God and his Word, we are free of sin.” Andrea, 11

“Sin holds you back, but Christ sets you free, so when we die we will go to Heaven. You will forever be in Jesus with no sin holding us back.” Ava, 11

On July 4, 1776, American patriots signed the Declaration of Independence in Philadelphia. When America’s founding fathers signed this paper, they knew they would have to fight the most powerful army in the world. They risked everything to become free from England.

Freedom is a big deal. Many people have died in many wars so that their fellow citizens could live in freedom.

On January 1, 1863, President Abraham Lincoln signed a paper that freed all slaves living in the southern part of the United States (Confederate States of America). This paper is called the Emancipation Proclamation. President Lincoln freed more than three million black people living in 10 southern states.

Jesus came into this world from heaven to set us free from the slavery of sin. When Jesus died on the cross, he paid the penalty that sin demands.

“When people sin, they earn what sin pays—death. But God gives his people a free gift—eternal life in Christ Jesus our Lord,” (Romans 6:23).

Jesus died and rose again so that we can live in spiritual freedom, which is the best kind of freedom. No one can take this freedom from you. Even if you go to jail for telling others about Jesus Christ, you are still free in your spirit.

There are two kinds of spiritual freedom: freedom from the penalty of sin and freedom from the power of sin. The penalty of sin is spiritual death, which is separation from God in hell forever. People who trust Christ as their savior can never go to hell because Jesus paid for their sins when he died on the cross. Freedom from sin’s power occurs when you rely on Jesus instead of yourself in facing the temptations of this world. Jesus wants us to depend on him, not ourselves or something else.

The first thing to do when studying a part of the Bible is to read the Bible verses before and after the verses you want to study. This is called the context.

In John 8:42, Jesus says, “If God were really your Father, you would love me.” Also, in John 8:40, Jesus tells his audience that they want to kill him.

I believe Jesus is talking to unbelieving Jews before and after John 8:30-32. Jesus takes a moment to speak to those who believed in him, and then goes right back to speaking to the unbelieving Jews.

We know for sure that Jesus is talking with new Christians in John 8:30-32 because the Bible clearly says this:

“While he was saying these things, many people believed in him. So Jesus said to the Jews who believed in him, ‘If you continue to accept and obey my teaching, you are really my followers. You will know the truth, and the truth will make you free.’” (John 8:30-32).

In the crowd that heard Jesus, there are believers and unbelievers. The unbelievers heard what Jesus said to those who had just “believed in Him” about how to be free. They told Jesus a lie when they said they had never been enslaved. The history of the Jewish nation started with God freeing the Jews from slavery to the Egyptians.

Jesus wanted these new Christians to know how to live in spiritual freedom. Jesus said, “If you continue to accept and obey my teaching, you are really my followers.”

If your mother tells you to clean your room every day, how will she know if you abide in her words? All she has to do is look at your room to know if you did what she said. That is abiding.

Jesus wants us to think about what he said and act upon it. To be his disciple means that you learn from him. You become a student of Jesus. He is your teacher. You read what he said as recorded in the Bible, memorize it and live by it. The Holy Spirit, who lives in you, will bring to mind what Jesus said. Jesus will guide you as you let him live his life through you.

To become a Christian is easy. Because Jesus died for all your sins and rose from the dead, he can now offer his forever life to all who believe in him. Eternal life is a gift to be received by faith alone in Jesus Christ alone.

To become a disciple of Christ is difficult because you can’t rely on your natural strength. God wants us to rely on his strength. You have to learn to trust the Lord in all things. It means you no longer live to please yourself or other people. You now live to please Christ. However, you can’t do this by self effort. You must rely on the Lord to work through you to do his will.

“Jesus continued to say to all of them, ‘Any of you who want to be my follower must stop thinking about yourself and what you want. You must be willing to carry the cross that is given to you every day for following me,’” (Luke 9:23).

Only Jesus can set you free from the penalty of sin and the power of sin. Neither can be done by self effort. You can’t work your way to heaven. You must trust in Jesus and the work he did on the cross to pay for your sins. After trusting in Jesus, you must trust him moment by moment for the wisdom, power and grace to represent him on Earth as an ambassador for his kingdom.

“They answered, ‘We are Abraham’s descendants. And we have never been slaves. So why do you say that we will be free?’” (John 8:33).

These unbelieving Jews lied about their history. They were enslaved by the Egyptians, Assyrians, Babylonians, Greeks, Syrians, and most recently the Romans.

“Abram believed the Lord, and because of this faith the Lord accepted him as one who has done what is right,” (Genesis 15:6).

God changed Abram’s name to Abraham. Long before God gave Moses the 10 commandments, Abraham was saved by faith. He knew God would one day provide a sacrifice for his sins. God accepted him because of his faith, not because of any works he did. Only those who believe God can be accepted by him.

Those who try to work their way into God’s favor will never make it. God the Father only accepts the work of the cross by his only Son, the Lord Jesus Christ. Only he can free us from sin’s penalty and power.

Do not ever confuse the conditions to be born again with the conditions of serving Christ as his disciple. Not every Christian is a disciple of Christ. Not every disciple is a Christian. Remember Judas. He followed Christ, but he never accepted the gift of eternal life by believing in the Lord Jesus Christ.

Sin is habit forming. This truth applies to unbelievers and believers. The unbelieving Jews thought they were free, but Jesus told them they were slaves of sin. Whoever rejects Jesus as their savior from sin will be a slave to sin forever. Everyone in the world without Christ is a slave of sin. Christians who are not being led by the Holy Spirit are slaves to the power of sin. They will lose blessing in time and kingdom rewards when Jesus establishes his kingdom on Earth.

The Jews of Jesus’ day trusted in their privilege of having Abraham as their relative. Yes, God chose Abraham to start a new race of people through whom he sent his only son into this world. These Jews needed to be born again. Being a Jew is not enough to secure a place in God’s family as one of his children. Jesus told these Jews that they were slaves of sin who needed a savior to set them free. Only those who believe God like Abraham did are truly God’s children.

Think About This: Just because your grandparents or parents go to church doesn’t mean you are a Christian. It doesn’t even mean they are Christians! Consider yourself blessed if you have parents and family who know God and love him. But don’t think that God will accept you because of your family. Each person needs to depend on Christ alone as one’s only hope for heaven. Only Jesus can free you from being separated from God forever. As God’s child, nothing can ever separate you from God.

Memorize This Truth: You will know the truth, and the truth will make you free,” (John 8:32). 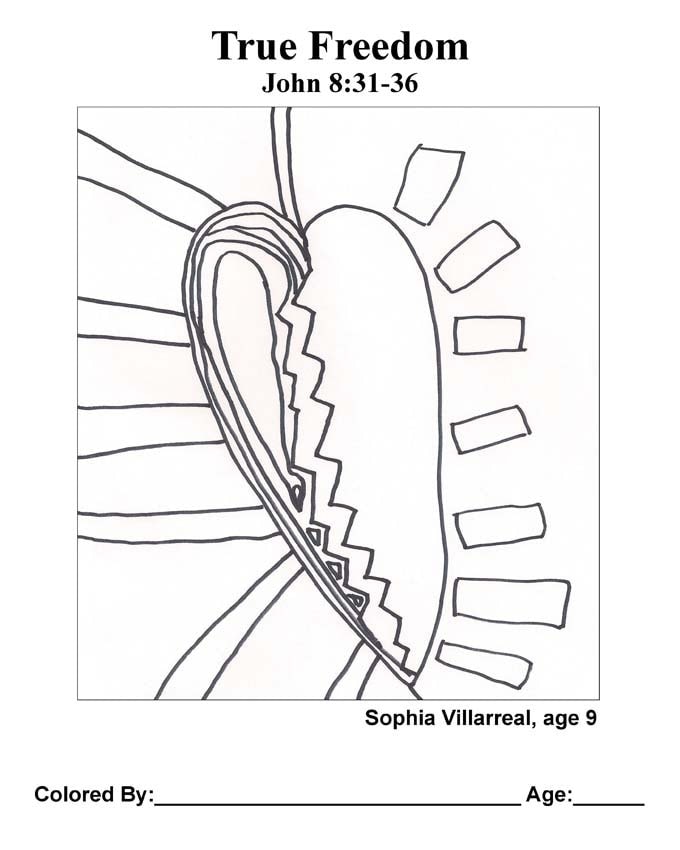