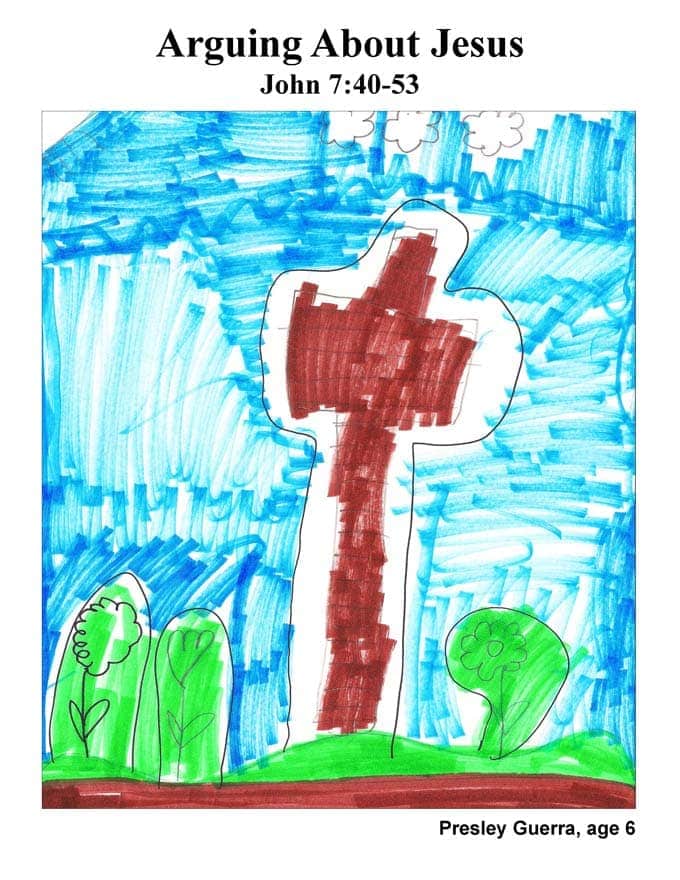 The People Argue About Jesus

40 When the people heard the things that Jesus said, some of them said, “This man really is the Prophet.a”
41 Other people said, “He is the Messiah.”
And others said, “The Messiah will not come from Galilee. 42 The Scriptures say that the Messiah will come from the family of David. And they say that he will come from Bethlehem, the town where David lived.”43 So the people did not agree with each other about Jesus. 44 Some of the people wanted to arrest him. But no one tried to do it.
The Jewish Leaders Refuse to Believe
45 The Temple police went back to the leading priests and the Pharisees. The priests and the Pharisees asked, “Why didn’t you bring Jesus?”
46 The Temple police answered, “We have never heard anyone say such amazing things!”
47 The Pharisees answered, “So he has fooled you too! 48 You don’t see any of the leaders or any of us Pharisees believing in him, do you? 49 But those people out there know nothing about the law. They are under God’s curse!”
50 But Nicodemus was there in that group. He was the one who had gone to see Jesus before.b He said, 51 “Our law will not let us judge anyone without first hearing them and finding out what they have done.”
52 The Jewish leaders answered, “You must be from Galilee too! Study the Scriptures. You will find nothing about a prophetc coming from Galilee.”
53 Then they all left and went home.

a Prophet They probably meant the prophet that God told Moses he would send. See Deuteronomy 18:15-19.

b He was the one … before The story about Nicodemus going and talking to Jesus is in John 3:1-21.

c a prophet Two early Greek copies have “the Prophet,” which would mean the “prophet like Moses” mentioned in Deuteronomy 18:15. In Acts 3:22 and 7:37 this is understood to be the Messiah, as in verse 40 above.

Why do people argue over who Jesus is?

“They don’t really want Jesus to exist. People should be thankful for Jesus.” Presley, 6

“The Pharisees thought he was not the Son of God.” Jonathan, 7

“They thought Jesus was doing something bad to their people.” Mikayla, 7

“They do not believe in Jesus.” Daniel, 6

“They don’t like him. They think that Jesus isn’t good.” Amber, 9

John 7:40-41a: When the people heard the things that Jesus said, some of them said, “This man really is the Prophet.” Other people said, “He is the Messiah.”

When the Jews said Jesus was “the Prophet,” they were thinking of the prediction that Moses made in Deuteronomy 18:15: “The LORD your God will send to you a prophet. This prophet will come from among your own people, and he will be like me. You must listen to him.”

In the same way, Moses foreshadowed the coming of the Lord Jesus Christ. Moses was like Jesus in so many ways. Jesus is the reality to which Moses pointed when he predicted that a prophet like him would come (Deuteronomy 18:15).

A writer named John Parsons wrote an article in which he listed 30 ways that Jesus and Moses are alike. Here are a few of them:

7. Both were shepherds of Israel. Moses led the Jewish people through the wilderness (Numbers). Jesus led his followers as the Good Shepherd (John 10: 10-11).

8. Both established covenants or special agreements between God and his people. The law came through Moses. The law is good because it shows us God’s standards, but no one except Jesus has ever kept it perfectly (Exodus 24:7-8). Jesus established the new covenant or contract when he died on the cross to pay for our sins. All who believe in him will have eternal life (Hebrews 9:11-15).

9. Moses established the Passover when the Angel of Death passed over all who had the blood of a lamp over their doors (Exodus 12:7-12). Jesus became the sacrificial lamb who took away the sins of the world (John 1:29).

The prophet Micah predicted the Messiah would be born in Bethlehem (Micah 5:2). The Jewish people knew this Bible verse. If they had taken time to ask some questions, this Bible verse could have helped them to know that Jesus is the Messiah. A lot of people know the Bible, but they fail to apply its teachings correctly. The very Bible verse that could have opened their eyes was used to reject Jesus as the Messiah. Just because you know the Bible does not mean you will always apply it correctly.

These soldiers who were sent by the Pharisees to arrest Jesus were not hardened soldiers. They were Jewish Levites who served as the temple guard. They were trained in the Old Testament Bible. Instead of taking Jesus captive, the soldiers were taken captive by Jesus’ teaching.

The Pharisees and religious leaders quickly condemned the soldiers and the common people for listening to Jesus. When it comes to spiritual things, God reveals himself to the humble and opposes proud people. If you humble yourself before God by wanting to know him, he will reveal himself to you.

As the Apostle James wrote: “God is against the proud, but he is kind to the humble,” (James 4:6). Also, remember what King David wrote: “I am wiser than all my teachers because I study your rules. I understand more than those who are older because I obey your instructions,” (Psalm 119:99-100).

John 7:50-53: But Nicodemus was there in that group. He was the one who had gone to see Jesus before. He said, “Our law will not let us judge anyone without first hearing them and finding out what they have done.” The Jewish leaders answered, “You must be from Galilee too! Study the Scriptures. You will find nothing about a prophet coming from Galilee.” Then they all left and went home.

This is the same Nicodemus who came to Jesus at night (John 3:1-18). When Nicodemus told Jesus that he knew he was a teacher from God, Jesus told him that he had to be born again. From this conversation came the most famous words Jesus ever said: “For God so loved the world that He gave His only begotten Son, that whoever believes in Him should not perish but have everlasting life” (John 3:16 NKJV).

The Mosaic Law said that any person accused of a crime should get a fair hearing (Deut. 1:16-17). Nicodemus proposed that Jesus should get a fair hearing before being judged. Instead of acknowledging the truth of what Nicodemus said, they attacked Nicodemus. They made fun of Nicodemus by saying that he must be from Galilee. Compared to Jerusalem, Galilee was like a small, country town. They said that no prophet could come from Galilee.

Actually, there were prophets that came from the Galilee area. Jonah and Nahum were from that area. However, if the Jewish leaders referred to “the prophet” whom Moses predicted, Moses didn’t say anything about the town or region from which the prophet would come.

Wouldn’t it be terrific if everyone who trusted Christ as savior immediately rejoiced and told all their friends about Jesus? This is not the case with Nicodemus. At this point, all we know is that he argues that Jesus should receive a fair hearing before being judged. We don’t even know if he is a Christian, but we do know that he urges his fellow leaders for fairness.

Some people come to Jesus slowly. It takes time. The next time we see Nicodemus in the Gospel of John, he is helping Joseph of Arimathea wrap the body of Jesus for burial. There is still no clear statement as to whether Nicodemus believes Jesus is his savior and long awaited Messiah. He and Joseph wrapped the body of Jesus for burial. If I had to guess, I would say that we will see Nicodemus in heaven. Like Joseph of Arimathea, he may have become a secret disciple for a time (John 19:38).

Judas Iscariot followed Jesus for three years and never did trust Christ as his savior. Judas betrayed Jesus for 30 pieces of silver (Matthew 26:15). It appears as though Nicodemus came to Jesus slowly by asking questions at first by night. He probably came at night so that no one would know of his interest in Jesus (John 3:1-2). We must be patient with people who are curious about Jesus. They might not be ready to trust him as their savior. If we are patient with them, they may trust him at a later time.

Think About This: Who is Jesus to you? Is Jesus a good man? Is he a miracle worker? Is he a gifted teacher? Jesus is all these things, but so much more. He is the greater Moses. Moses brought us God’s law, but Jesus kept God’s law perfectly and offered himself to God as a sacrifice for all the times we have broken God’s law. Jesus is God’s chosen savior who offers eternal life as a free gift to all to believe in him. God wants everyone to live with him forever.

Memorize This Truth: “God is against the proud, but he is kind to the humble,” (James 4:6).

Ask This Question: Have you trusted in Jesus Christ as your savior? 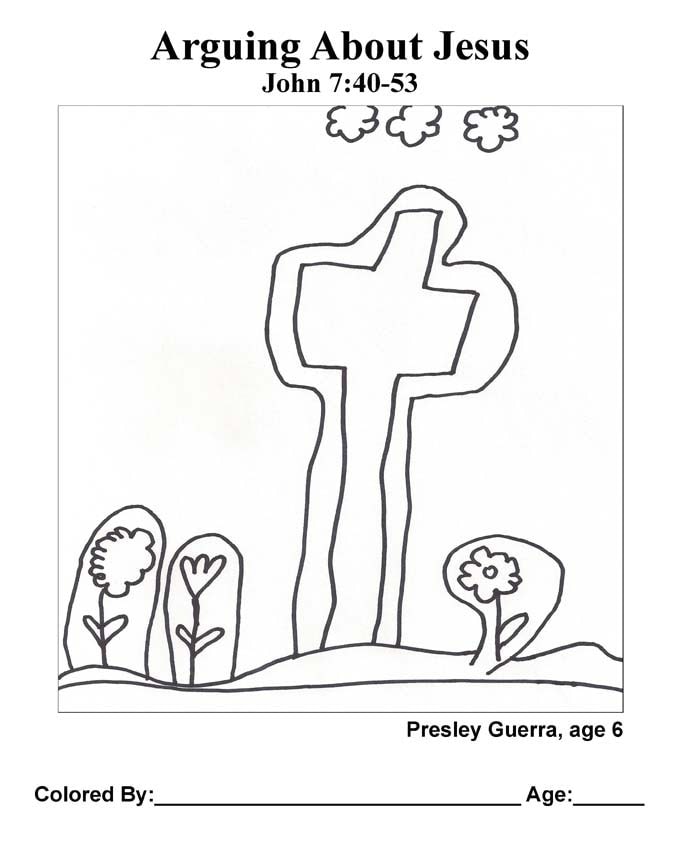