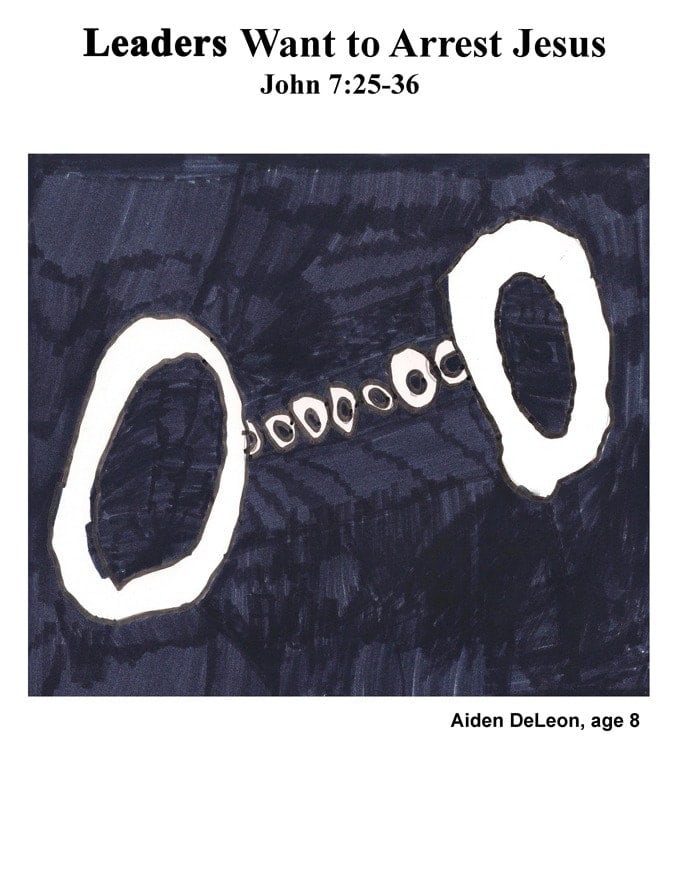 People Wonder if Jesus Is the Messiah

25 Then some of the people who lived in Jerusalem said, “This is the man they are trying to kill. 26 But he is teaching where everyone can see and hear him. And no one is trying to stop him from teaching. Maybe the leaders have decided that he really is the Messiah. 27 But when the real Messiah comes, no one will know where he comes from. And we know where this man’s home is.”
28 Jesus was still teaching in the Temple area when he said loudly, “Do you really know me and where I am from? I am here, but not by my own decision. I was sent by one who is very real. But you don’t know him. 29 I know him because I am from him. He is the one who sent me.”
30 When Jesus said this, the people tried to grab him. But no one was able even to touch him, because the right time for him had not yet come. 31 But many of the people believed in Jesus. They said, “We are waiting for the Messiah to come. When he comes, will he do more miraculous signs than this man has done?”

Why did some people want to arrest Jesus?

“They did not like Jesus. They hated him. They did not think he was the savior and they wanted to crucify him.” Jonathan, 7

“They thought that Jesus was lying about being the Son of God.” Addison, 5

“They wanted to kill Jesus. They thought he wasn’t God’s Son, but he is Jesus. He didn’t do anything wrong, but the people did not believe him when he said he was King of the Jews.” Amber, 9

“They thought He was being bad.” Adam, 5

The Jews in Jerusalem could hardly believe Jesus was teaching openly in the temple. They knew that the religious leaders wanted to kill Jesus. Of all the people in the world, you would think that the Jews of Jerusalem would recognize Jesus as their Messiah. Living in Jerusalem, they were surrounded by clues. That gave them a big advantage over other people.

Jerusalem was the center of learning for the Old Testament Bible. Jerusalem had the temple with daily animal sacrifices. Several times a year, Jews from Israel and other countries traveled to Jerusalem to celebrate religious feasts or holidays. The Jerusalem Jews had so many opportunities to learn about the Lord.

When God gives you a lot of grace to learn about him, you have a privilege, an advantage and a responsibility. If you live in a modern-day, developed country, you have more opportunities to learn about the Lord than any people throughout all of history. We have access to Christian books (Bible studies and devotionals), online sermons, Christian music and radio programs. We can freely attend church meetings without wondering if we are going to be persecuted by the government. People in poor and undeveloped countries don’t have such easy access to these wonderful learning tools.

Jerusalem Jews Believed a False Idea About the Messiah

The Jews believed something false about the Messiah. They said: “But when the real Messiah comes, no one will know where he comes from. And we know where this man’s home is,” (John 7:27).

When people believe something false about God, it can prevent them from seeing the truth about God. The prophet Micah clearly predicted that the Messiah would come from Bethlehem: “But you, Bethlehem Ephrathah, are the smallest town in Judah. Your family is almost too small to count, but the ‘Ruler of Israel’ will come from you to rule for me. His beginnings are from ancient times, from long, long ago,” (Micah 5:2).

As you probably know, Jesus was born in Bethlehem. Most people know the story of the wise men from the east who brought gifts to Jesus in Bethlehem (Matthew 2:1-6).

Jerusalem’s religious leaders pointed the wise men to Bethlehem when they asked where the King of the Jews would be born. When Jesus appeared in Jerusalem during his ministry, there is no record of religious leaders asking him where he was born. They knew Jesus to be from Nazareth, which is where he and his family lived after he returned from living in Egypt to escape King Herod’s command to kill all the children two years old and younger living in Bethlehem. Nazareth was not an impressive place like Jerusalem. The Jerusalem Jews could not imagine their Messiah coming from a small town like Nazareth. It was probably more like a village than a town.

The Jerusalem Jews wanted their Messiah to ride in on a white horse with angelic armies to conquer the Romans who ruled over them. They wanted a powerful, glorious Messiah. If you read Daniel 7, the Messiah is the glorious one who comes riding on the clouds to destroy enemies and to set up his kingdom.

But if you read Isaiah 53, you will see that the Messiah is a suffering servant who takes our sins on himself. He is a man of sorrows, who was “like a lamb being led away to be killed,” (Isaiah 53:7). When Jesus came the first time, he hid his glory. There was just one time Jesus let his glory shine so that three of his disciples could see him (Luke 9:28-34).

“Jesus was still teaching in the Temple area when he said loudly, ‘Do you really know me and where I am from? I am here, but not by my own decision. I was sent by one who is very real. But you don’t know him. I know him because I am from him. He is the one who sent me.’ When Jesus said this, the people tried to grab him. But no one was able even to touch him, because the right time for him had not yet come,” (John 7:28-30).

People who think they know God do not like to be told that they do not know God. Jesus was not afraid to tell people the truth even when he knew some of them wanted to kill him. Because Jerusalem Jews knew where Jesus was from (Nazareth), they thought they knew him. Jesus was born in Bethlehem and grew up In Nazareth, but he was really from heaven. God the Father sent him to the Jews.

Do not be surprised if people get mad when you tell them the good works or religious things they do will not get them into heaven. Some of these people wanted to grab Jesus to take him to jail, but he knew it was not the time for that. Even though Jesus faced great danger, he continued to speak the truth.

“But many of the people believed in Jesus. They said, ‘We are waiting for the Messiah to come. When he comes, will he do more miraculous signs than this man has done?’ The Pharisees heard what the people were saying about Jesus. So the leading priests and the Pharisees sent some Temple police to arrest him. Then Jesus said, ‘I will be with you a little while longer. Then I will go back to the one who sent me. You will look for me, but you will not find me. And you cannot come where I am,’” (John 7:31-34).

The Jewish religious leaders did not want people to believe in Jesus. When they heard people saying Jesus is the Messiah, they did not like it. The leaders were so mad that they sent Temple guards to arrest Jesus. The guards did not arrest Jesus because his time to be arrested had not come yet. God the Father protected Jesus so that he could complete his mission. You could say that Jesus took the guards captive by his message. He told them and other people in the crowd that he would be with them only for a little while. He would soon return to his Father.

“These Jews said to each other, ‘Where will this man go that we cannot find him? Will he go to the Greek cities where our people live? Will he teach the Greek people there? He says, “You will look for me, but you will not find me.” He also says, “You cannot come where I am.” What does this mean?’” (John 7:35-36).

Many Jews of Jesus’ day considered themselves superior to Gentiles (non-Jews). Instead of being grateful that God had chosen them to be a light to the Gentiles, they turned inward and became proud of God’s choosing them. Here’s a good example of why we should be grateful. You may have heard the saying, “Pride goes before a fall.” Gratitude is one thing that can keep you from becoming prideful and falling away from the Lord.

Moses predicted that the Jews would turn to idols. This made God jealous. He wanted the Jews to worship him only. Moses also predicted that God would make the Jews jealous by turning to the Gentiles. Here is what God said about Israel in Deuteronomy 32:21:

God chose the Jews to be a special people for himself. God loves them dearly. He sent Jesus into the world through a Jewish mother related to King David, as the Jewish prophets predicted (Isaiah 9:7 & Psalm 132:11). Sadly, though Jesus came to them as their Messiah, most rejected him. We can be glad some Jews trusted Jesus as their Messiah. Jesus’ twelve apostles were Jewish. The first church started with Jewish believers in Jerusalem.

When Jesus said, “You will look for me, but you will not find me,” the Jewish crowd should have been afraid. Instead, they wondered if Jesus would go to the Gentiles. Perhaps this was their way of saying Jesus would take his message to unimportant people. They did not like Gentile people.

Think about this: After Jesus rose from the dead and gave the Holy Spirit to his disciples, they did take the good news of the gospel to the Gentiles. The Apostle Paul called himself an apostle to the Gentiles (Romans 11:13). For about 2,000 years, God has been making the Jewish people jealous by taking the gospel of grace to the Gentiles.

Memorize this truth: “But many of the people believed in Jesus. They said, ‘We are waiting for the Messiah to come. When he comes, will he do more miraculous signs than this man has done?’” (John 7:31).

Ask this question: Do you believe that Jesus is the Messiah, God’s only son whom he sent as savior of the world? 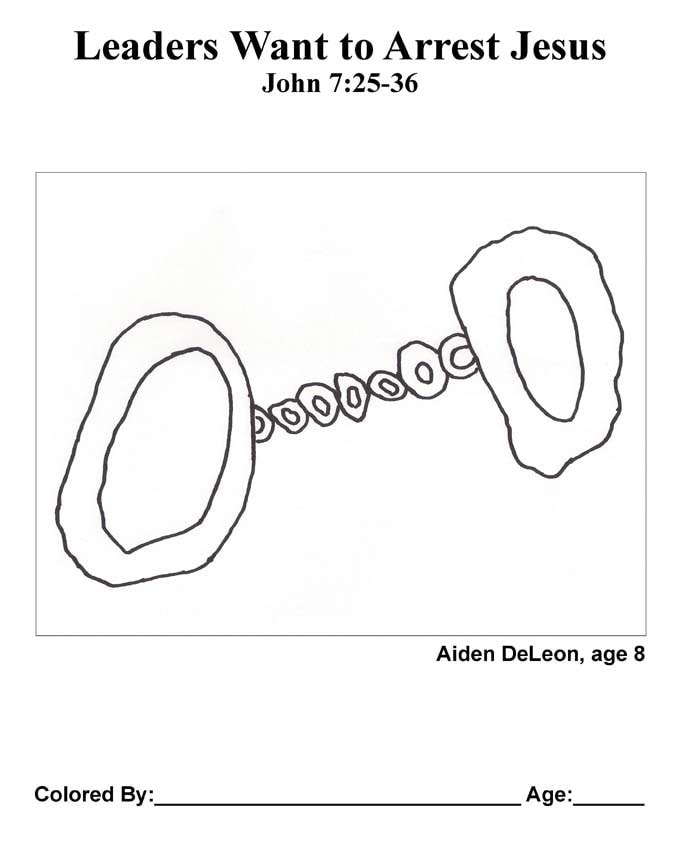