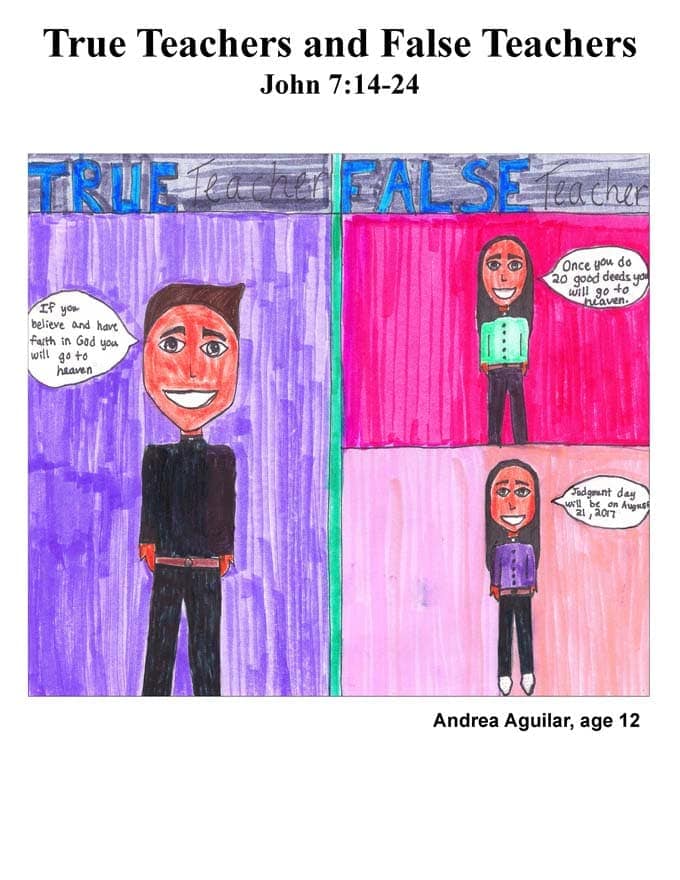 14 When the festival was about half finished, Jesus went to the Temple area and began to teach. 15 The Jewish leaders were amazed and said, “How did this man learn so much? He never had the kind of teaching we had!”

16 Jesus answered, “What I teach is not my own. My teaching comes from the one who sent me. 17 People who really want to do what God wants will know that my teaching comes from God. They will know that this teaching is not my own. 18 If I taught my own ideas, I would just be trying to get honor for myself. But if I am trying to bring honor to the one who sent me, I can be trusted. Anyone doing that is not going to lie. 19 Moses gave you the law, right? But you don’t obey that law. If you do, then why are you trying to kill me?”
20 The people answered, “A demon is making you crazy! We are not trying to kill you.”
21 Jesus said to them, “I did one miracle on a Sabbath day, and you were all surprised. 22 But you obey the law Moses gave you about circumcision—and sometimes you do it on a Sabbath day. (Really, Moses is not the one who gave you circumcision. It came from our ancestors who lived before Moses.) Yes, you often circumcise baby boys on a Sabbath day. 23 This shows that someone can be circumcised on a Sabbath day to obey the Law of Moses. So why are you angry with me for healing a person’s whole body on the Sabbath day? 24 Stop judging by the way things look. Be fair and judge by what is really right.”

How can we know if someone is a true teacher from God?

“God’s teachers speak for God and not for themselves. They get all their teachings from the Bible and nothing else. The only reason they teach is for God’s glory.” Emily, 12

“If someone says, ‘Once you do 20 good deeds, you will go to heaven when you die,’ and that is not what it says in the Bible, then they are not a true teacher of God.” Andrea, 11

“If they say exactly what is in the Bible and do not make up their own stuff, then they are being a true teacher from God.” Alexis, 11

“We know someone is a true teacher of God if they teach the Word of God correctly and they don’t twist the Bible into making you do what they want. If you don’t know if what a teacher is teaching is true, then look it up in the Bible because it has all the answers.” Iva, 11

“We can know by hearing what they’re teaching and checking if it’s right. If it’s not, we can help them learn more about it and teach them so they could go teach others.” Rick, 10

During the time of Jesus, Jews from all over Israel and other countries traveled to Jerusalem to celebrate the Feast of the Tabernacles, which is also known as the Feast of Booths. This religious feast celebrated the 40 years when God provided for the Jews as they wandered in the desert. Because they moved from place to place, they could not build houses. They lived in tents or temporary shelters. So for one week during this feast, Jews built and lived in booths made from palm tree branches and other things.

In the middle of the Jewish religious celebration, Jesus went to the temple and taught. Even though Jewish religious leaders wanted to kill Jesus, this did not stop him from doing what his heavenly Father wanted him to do. Jewish leaders were amazed at Jesus’ teaching. They did not understand how someone could know so much about God and the Bible without having studied with a Jewish rabbi, which is a Jewish religious teacher.

In our day, we could say that Jesus never studied at a seminary. This does not mean that studying at a seminary is a bad thing. It does mean that when you open your heart to God, he can and will teach you things. It would be a big mistake to think that God can only use people who go to Bible college or seminary.

Jesus answered, “What I teach is not my own. My teaching comes from the one who sent me. People who really want to do what God wants will know that my teaching comes from God. They will know that this teaching is not my own. If I taught my own ideas, I would just be trying to get honor for myself. But if I am trying to bring honor to the one who sent me, I can be trusted. Anyone doing that is not going to lie,” (John 7:16-18).

Jesus promises special knowledge and insight for those who obey him: “People who really want to do what God wants will know that my teaching comes from God,” (John 7:17). God sent the Holy Spirit to live inside of all Christians. He guides us into God’s truth.

John the Baptist said he was “a voice crying in the wilderness,” (John 1:23, NKJV). That is the right attitude. Imagine hearing a voice at night that tells you something important from God. You do not even see the person. All you hear is a voice. That should be your goal in life. Be a voice for God.

If you give God the glory in everything you say and do, he can and will use your voice. If you start to think of yourself as something more than a voice, you will seek honor and glory for yourself. If this happens, God can no longer use your voice for his glory. If something taught really comes from God, no teacher, preacher or evangelist should take credit for it.

These Jewish leaders claimed to know the law given by Moses. They all knew the sixth commandment, which says, “You must not murder anyone,” (Exodus 20:13). Yet, they wanted to murder Jesus. Just because people are highly educated does not mean they have pure hearts.

Jesus warned us that anger is the seed of murder (Matthew 5:21-22). Religious people who are trying to work their way to heaven often get very angry at people who believe that eternal life is a gift to be received, not a reward to be earned. The grace of God makes some people so angry that they will murder people who believe it or teach it.

Those who have the privilege of dying for Jesus look to him as their example. Jesus continued to love those who persecuted him to the end of his life. He even forgave those who nailed him to the cross: “Father, forgive them. They don’t know what they are doing,” (Luke 23:34).

Religious Jews and rabbis (teachers) prided themselves on being able to argue from God’s law. Many times, they tried to trap Jesus with trick questions. They could never do it because he had wisdom from his Father. This is one of the reasons they hated Jesus.

Jesus was ready for the arguments of the religious leaders. He started by reminding them that God commanded Jews to be circumcised long before he gave them the 10 commandments. It started with Abraham, the father of the Jewish people. Circumcision was a sign of the covenant or contract that God made with Abraham (Genesis 17:9-14).

“Stop judging by the way things look. Be fair and judge by what is really right,” (John 7:24).

God wants us to see the big picture. He wants us to have wisdom. When we think about how Jesus used the Bible to defend his actions, we see wisdom in action. When Jesus said stop judging by the way things look, he meant that we must look beyond the surface.

Making a man whole on the Sabbath was a good and right thing to do. The religious leaders could only see work being done on the Sabbath. They missed the bigger picture of what Jesus did by healing the crippled man.

A lot of unbelievers like to quote Matthew 7:1: “Don’t judge others, and God will not judge you.” What they are really saying is that you should not judge them for the sinful things they like to do. They want you to go along with them. You don’t have to.

God wants us to have a gracious attitude toward believers and unbelievers. This does not mean that you have to be neutral when someone wants to do something wrong.

From God’s word, you can know right from wrong. With the leading of the Holy Spirit, you can know when to speak up and when to remain silent about things people do wrong.

Let’s look at the sin of gossip. God does not want us to say bad things about people and tell lies about them. Even if a friend has done something wrong, we should not be telling other people about it. If you have a friend who likes to gossip, should you tell them to stop spreading rumors? Well, if you gossip, how can you tell a friend to stop talking about others behind their backs?

Jesus warned against being a hypocrite. Hypocrites are people who tell others not to do something wrong that they like to do. If you want to see what Jesus said about this, read Matthew 7:1-5.

Think about this: Jesus wants us to be smart about how to live for him. At times, we may have to go against religious tradition or popular opinion to live for God. Like a salmon, we will have to swim upstream against the current. It will not be easy, but God will give you the grace and wisdom to do it.

Memorize this truth: “Stop judging by the way things look. Be fair and judge by what is really right,” (John 7:24).

Ask this question: Are you enjoying the adventure of seeing God work in your life even if it means going against popular opinion or religious tradition? 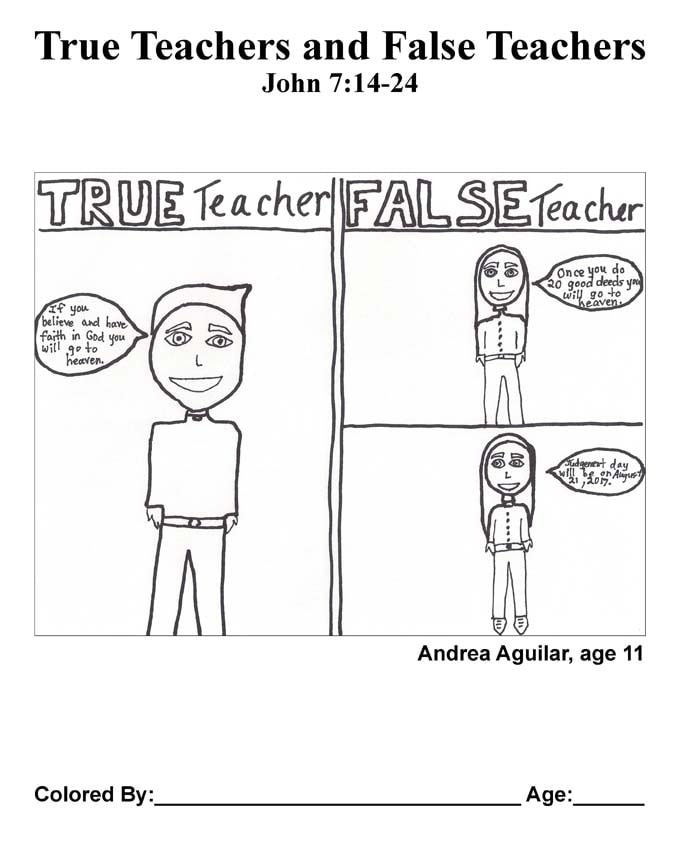