1 Later, Jesus went across Lake Galilee (also known as Lake Tiberias).2 A great crowd of people followed him because they saw the miraculous signs he did in healing the sick. 3 Jesus went up on the side of the hill and sat there with his followers. 4 It was almost the time for the Jewish Passover festival.

5 Jesus looked up and saw a crowd of people coming toward him. He said to Philip, “Where can we buy enough bread for all these people to eat?” 6 He asked Philip this question to test him. Jesus already knew what he planned to do.

7 Philip answered, “We would all have to work a month to buy enough bread for each person here to have only a little piece!”

8 Another follower there was Andrew, the brother of Simon Peter. Andrew said, 9 “Here is a boy with five loaves of barley bread and two little fish. But that is not enough for so many people.”

10 Jesus said, “Tell everyone to sit down.” This was a place with a lot of grass, and about 5000 men sat down there. 11 Jesus took the loaves of bread and gave thanks for them. Then he gave them to the people who were waiting to eat. He did the same with the fish. He gave them as much as they wanted.

14 The people saw this miraculous sign that Jesus did and said, “He must be the Propheta who is coming into the world.”

15 Jesus knew that the people planned to come get him and make him their king. So he left and went into the hills alone.

a Prophet They probably meant the prophet that God told Moses he would send. See Deut. 18:15-19.

What can we learn from Jesus feeding 5,000 people?

“The people were surprised when they saw two fish and five loaves feed all of them.” Alejandro, 7

“Have faith and trust in the Lord. You have to trust in what God is going to do for you.” Andrew, 8

Jesus performed this miracle close to the time of the Passover Feast. For the Jews, the Passover is like what July 4 is to Americans. It is their independence day. The Jewish people were slaves in Egypt for 400 years. At Passover, Jewish people remember and celebrate when God brought their ancestors out of Egypt by performing many miracles.

Even though the Lord performed many miracles through Moses, the Egyptian ruler (Pharaoh) refused to let the Jewish people leave Egypt. After the Passover miracle, Pharaoh finally let the Jews leave Egypt. The Lord killed all the firstborn people and animals in Egypt who did not have the blood of the lamb on their doors.

After Moses led the Jews out of Egypt, God fed them in the desert for 40 years with bread from heaven called manna. When Jesus multiplied the boy’s five loaves of bread and two fish to feed 5,000 men, you can understand why the Jews got so excited. Many in the crowd probably thought that Jesus would be their liberator to defeat the Romans like Moses had defeated the Egyptians. When Jesus lived, the Romans ruled over the Jewish people. Jesus did not come to defeat Roman armies and make himself king of the Jews.

Jesus sent his 12 disciples to the other side of the Sea of Galilee in a boat while he climbed a mountain to get away from the crowd. He might have done this to protect his disciples from some in the crowd who wanted to make him king too soon.

Jesus knew that he first had to die on a cross to pay for our sins. The kingly crown would come after Jesus died for our sins, rose from the dead and went up to heaven. Jesus knew the timing and order of his Father’s plan. He refused to take the crown before he took the cross upon which he died.

When Jesus saw the crowd coming toward him, he asked his disciple Phillip, “Where can we buy enough bread for all these people to eat?” The same Bible text in John 6 tells us that Jesus already knew what he would do. Jesus tested Phillip with this question.

God Tests Us, But Satan Tempts Us

There is a big difference between a test and a temptation. God will test Christians so that they may grow in their ability to trust him. God always wants us to pass any test he sends our way.

When Satan tempts, he always wants to draw us away from trusting God. The evil one wants us to fail. Also, he will try to make us feel guilty about our sin. Only the grace of God can set us free from his evil tricks.

I’m sure Jesus would have been happy to hear Phillip say something like this: “Lord, you turned the water into wine at the marriage feast. Why don’t you take that boy’s lunch and feed everyone?”

Instead Phillip said, “Here is a boy with five loaves of barley bread and two little fish. But that is not enough for so many people,” (John 6:9).

When we fail to look to God, we live small lives. We are limited to what we can do on our own. The feeding of the 5,000 begins with Jesus lifting up his eyes (John 6:5). Jesus looked to his heavenly Father for what he should do. God has unlimited resources.

Think about this: When we have problems, we must start by lifting up our eyes to the Lord. The more we look to the Lord Jesus, the smaller our problems seem. Nothing is impossible for him.

Memorize this truth: “And it is impossible to please God without faith. Anyone who wants to come to him must believe that God exists and that he rewards those who sincerely seek him,” (Hebrews 11:6).

Ask this question: Where do you look when you see problems? 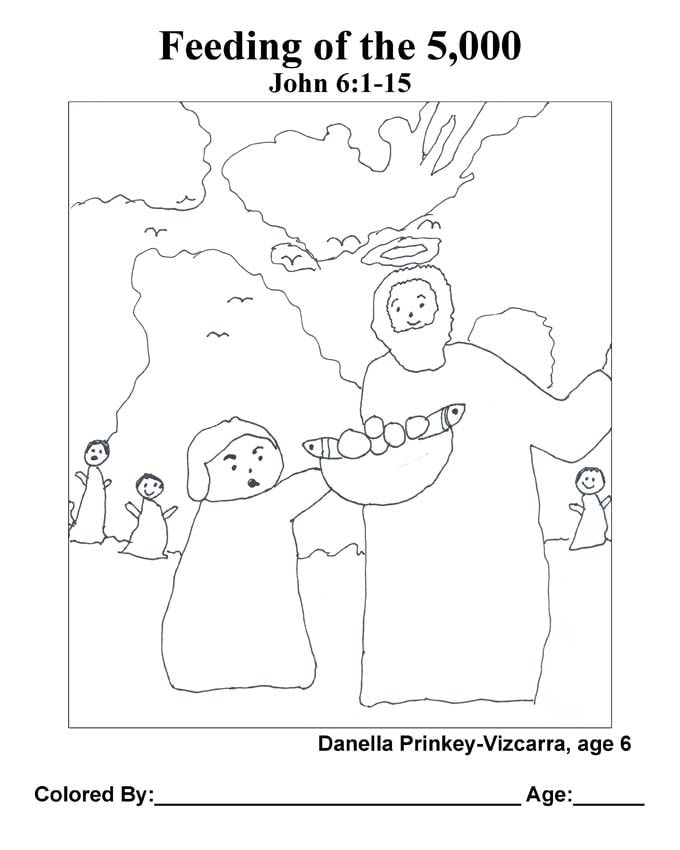