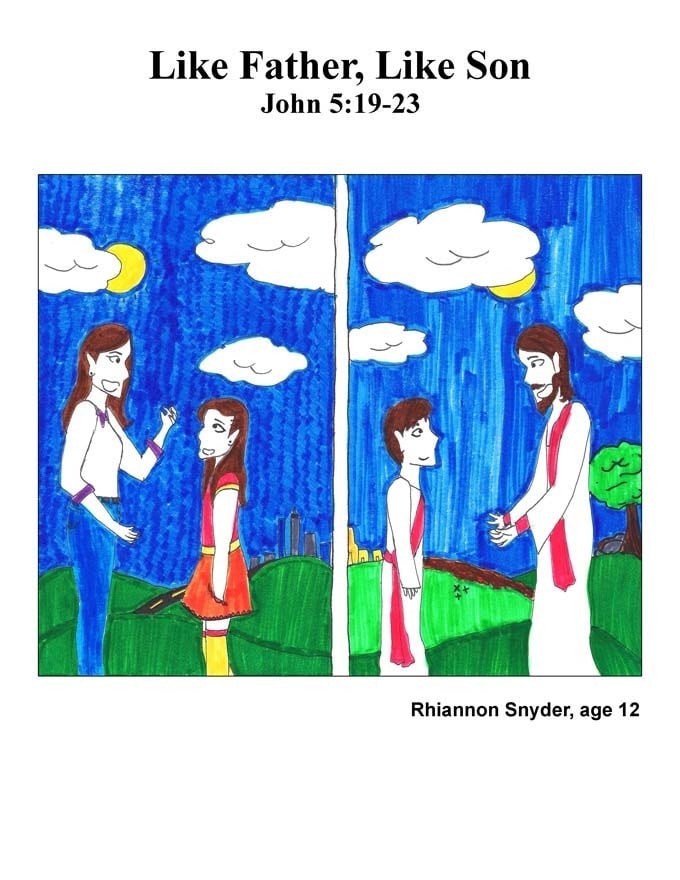 19 But Jesus answered, “I assure you that the Son can do nothing alone. He does only what he sees his Father doing. The Son does the same things that the Father does. 20 The Father loves the Son and shows him everything he does. This man was healed. But the Father will show the Son greater things than this to do. Then you will all be amazed. 21 The Father raises the dead and gives them life. In the same way, the Son gives life to those he wants to.

What can we learn from Jesus doing only what he saw his Father doing?

“We should obey Him and be like Him. When you follow God, you have more joy than other people.” Nadia, 12

“We can show God’s love just like He did to us. Jesus listens to our prayers and we should listen to Him because He listened to us.” Lauren, 9

“We can be disciples of Jesus and spread His true and holy Word, just like how His disciples were spreading His Word. We can be fishers of men, just like his disciples. If we follow God and worship God just like Jesus, the devil will never win.” Tristiana, 11

“Jesus followed what His Father has done. So we follow what Jesus does.” Hannah, 10

Jesus and his Father think alike. Jesus never does anything that his Father does not want him to do. Jesus thinks about what will please his Father. When he sees his Father doing something, then he does the same thing.

One of the ways to show love is to share your thoughts and plans with the one you love. Jesus has been working with his Father since before he created the world. God the Father always shows Jesus what he is going to do. Jesus works with his Father on his plans for the world and the people in it.

In John 5:20, Jesus said his Father would show him greater things to do than healing the crippled man. Can you think of some greater things Jesus would do?

The next two verses tell us about the greater things. Jesus can give life to whomever he pleases, and the Father has given Jesus the right to judge everyone. We know from many Bible verses that Jesus has decided to give eternal life to all who believe in him. Please read John 3:16.

Jesus and his Father are separate persons but they are so united that they act as one person. Here are some of the ways they are united:

1. Jesus and his Father are united in action. Jesus doesn’t do anything unless he sees his Father doing it (John 5:19).

Jesus did not live to please people. He put himself under the rule of heaven. Because Jesus listened to the voice of his Father, he lived on earth as though he were in heaven.

Even though Jesus lived a sinless life, he denied himself in the Garden of Gethsemane when he prayed, “Father, if you are willing, please don’t make me drink from this cup. But do what you want, not what I want” (Luke 22:42).

We deserve to be punished by God for our sins. Now, imagine a giant cup filled with God’s anger for all the sins and bad things we have done. On the cross, Jesus drank God’s anger. He took the punishment that we deserve. God poured out his anger on Jesus for all the bad things people have done. Jesus hung and suffered on a cross so that we could live with him forever.

If there were another way to bring us to himself, Jesus would have done it. Jesus prayed, “If you are willing, please don’t make me drink from this cup.” However, Jesus denied his sinless self and submitted to his Father’s will. He prayed, “do what you want, not what I want.”

2. Jesus and his Father are united in love, secrets and planning (John 5:20). When you love someone, you tell secrets. The Father tells Jesus everything he does. The plan that the Father showed Jesus was hard, but Jesus didn’t try to change the plan. Jesus knew he would have to die on a cross to pay for our sins. He knew that if he suffered, he could offer us eternal life as a free gift. This made him very happy (Hebrews 12:2).

4. Jesus and his Father are united in judging (John 5:22-23). God the Father has given all judgment to Jesus. He will determine who goes to heaven and who goes to hell. Jesus has already told us that all who believe in him will live with him forever. Jesus will also look at the lives of all Christians to determine their rewards. Remember, Jesus said that even a cup of cold water given in his name will be rewarded (Matthew 10:42).

God will honor all those who honor Jesus by following him as a faithful servant. How would you like to help Jesus rule the earth when he returns as King of kings and Lord of lords? If you are faithful to him now, he may reward you by asking you to serve him as mayor of your city or even governor of your state! Can you imagine Jesus rewarding you with great responsibility in his kingdom?

5. Jesus and his Father are united in honor. God the Father wants everyone to honor his Son. Because Jesus is the top judge of the universe, everyone should honor him. When a human judge comes into court, everyone honors the judge by standing up. Imagine how much more we should honor Jesus as the judge of all judges.

Think about this: Jesus listened to his Father when he died on the cross to pay for our sins.

Memorize this truth: “Father, if you are willing, please don’t make me drink from this cup. But do what you want, not what I want” (Luke 22:42).

Ask this question: Have you accepted the free gift of eternal life by believing Jesus is God’s only Son who died on the cross for your sins and now lives as King of the universe? 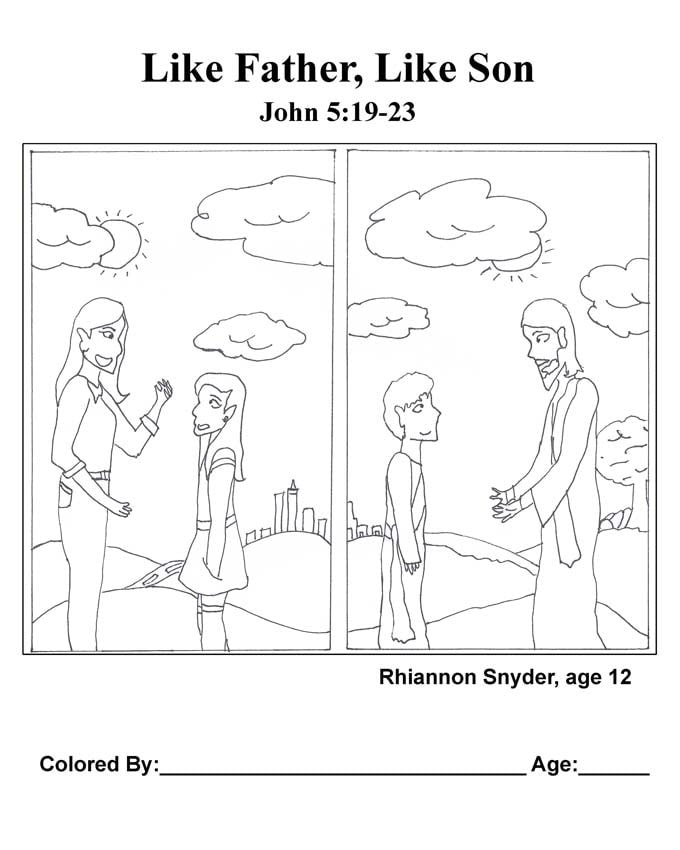