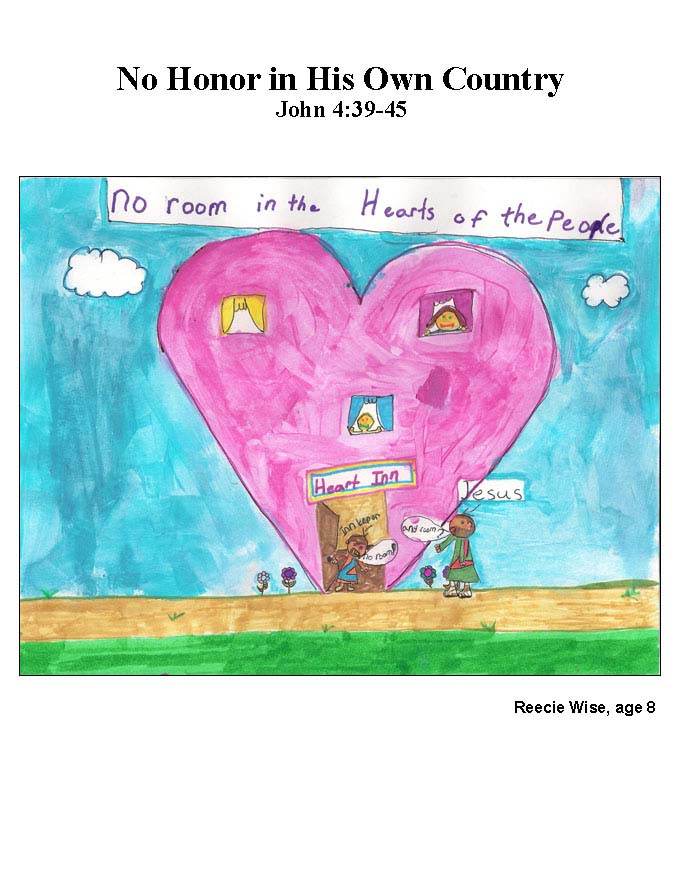 No Honor in His Own Country

42 The people said to the woman, “First we believed in Jesus because of what you told us. But now we believe because we heard him ourselves. We know now that he really is the one who will save the world.”

43 Two days later Jesus left and went to Galilee. 44 (Jesus had said before that a prophet40 is not respected in his own country.) 45 When he arrived in Galilee, the people there welcomed him. They had been at the Passover41 festival in Jerusalem and had seen everything he did there.

40prophet A person who speaks a message from God. Many of the books in the Old Testament are messages spoken or written by “the prophets,” who were some of those God chose to speak for him. God often used dreams or visions to tell or show his prophets what they should say.

41Passover A very important holy day for the people of Israel and their descendants. They ate a special meal on this day every year to remember that God made them free from slavery in Egypt in the time of Moses. The name may come from the word in Ex. 12:13, 23, 27 that means “to pass over” or “to protect.”

Why did Jesus say that a prophet has no honor in his own country?

“They knew Jesus when he was a kid. They just said, ‘Hi Jesus,’ but they didn’t know he was God.” Stacey, 6

“Isaiah 53 shows that Jesus had been expecting this all along. ‘People made fun of him, and even his friends left him. He was a man who suffered a lot of pain and sickness. We treated him like someone of no importance, like someone people will not even look at but turn away from in disgust’” (Isaiah 53:3). Nathaniel, 9

“The people kept waiting for a prophet to come, but there he was right in front of them.” Julia, 7

The Samaritans received Jesus as the Messiah foretold by the Hebrew prophets. They invited Jesus to stay with them. When Jesus preached in Jerusalem, some people didn’t like what he said. Religious people tried to ask him trick questions. Other times, people picked up stones to throw at him. Unlike the Samaritans, they didn’t ask Jesus to stay.

People in Jesus’ hometown of Nazareth thought they knew Jesus well. They knew his mother, brothers and sisters. They knew that Jesus was a carpenter. Most people will judge you by what they see.

Most of who we are is unseen. You can’t see what someone is thinking. You can’t hear someone pray silently. God hears everything that we think and pray. The real person that we are comes from who we are on the inside, not the outside. “For as he thinks in his heart, so is he” (Proverbs 23:7 NKJV).

When Jesus taught in his hometown synagogue at Nazareth, those who heard him said, “Where did this man get this teaching?” (Mark 6:2). The Bible says they were both astonished and offended. They saw Jesus heal people, but they couldn’t get past the fact that they knew his mother, brothers and sisters. Jesus was only a carpenter. He didn’t study under the religious teachers in Jerusalem.

Don’t think that God can’t use ordinary things and people. Remember how God spoke to Moses for the first time? He used a burning bush. In God’s hands, something ordinary can become amazing. In Pharaoh’s court, God turned the common shepherd’s staff that Moses carried into a snake.

When the prophet Samuel traveled to anoint a new king for Israel, he thought Jesse’s oldest son, Eliab, would be God’s choice.

“But the Lord said to Samuel, ‘Eliab is tall and handsome, but don’t judge by things like that. God doesn’t look at what people see. People judge by what is on the outside, but the Lord looks at the heart. Eliab is not the right man’” (I Samuel 16:7).

The Lord chose a shepherd boy attending his father’s sheep. David wasn’t Samuel’s first choice. In the time in which David lived, the oldest son was usually the favorite. David was the youngest son. God likes to do things in ways that surprise most people.

Jesus didn’t come into this world with a big announcement to world leaders. The place where he lived (Nazareth) was small and unimportant. The profession he chose (carpentry) didn’t impress people.

The Old Testament is full of prophecies about the Messiah. The Hebrew prophets foretold where Jesus would be born (Bethlehem), who he would be related to (King David) and the sufferings he would endure for our sins (Isaiah 53:6). The Hebrew prophets spoke and wrote about the Messiah. Jesus performed many miracles of healing. All this didn’t matter. Instead of honoring Jesus as the Messiah, Jewish religious leaders looked for opportunities to arrest Jesus.

Jesus isn’t walking on the Earth, but he did leave us to discover what he wanted us to do. We have the Bible and books like the one you are reading now. We can honor Christ today by believing he died on the cross for our sins. After being born again, we can follow him as his disciple. A disciple of Jesus is someone who is always learning about Jesus because they want to follow him.

Think about this: Christians can honor Christ today by sharing the good news of God’s saving grace with family, friends and people that they will meet. Let God know that you’re ready to let Christ live through you.

Memorize this truth: “Jesus had said before that a prophet is not respected in his own country” (John 4:44).

Ask this question: Are you honoring Jesus Christ today? 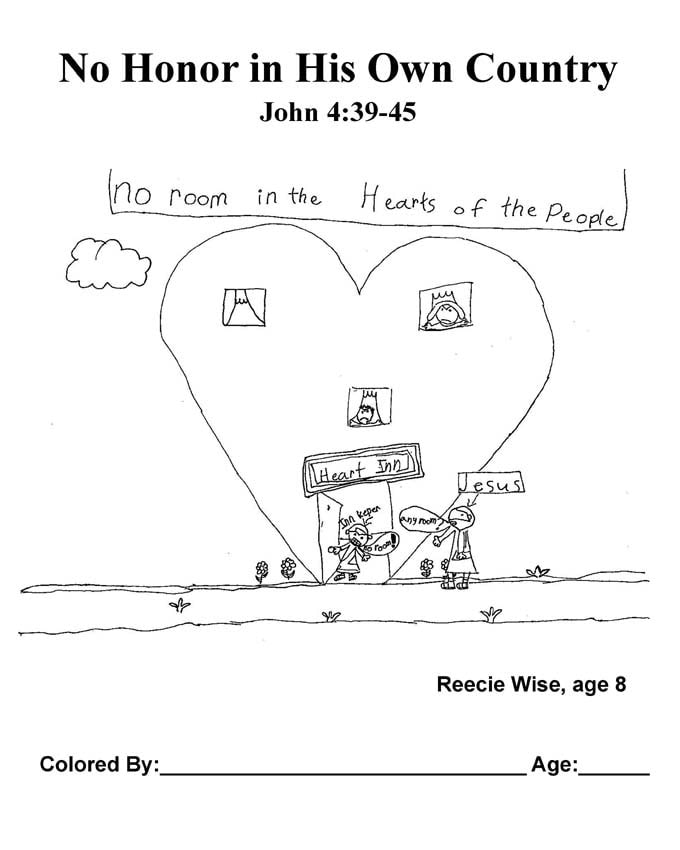