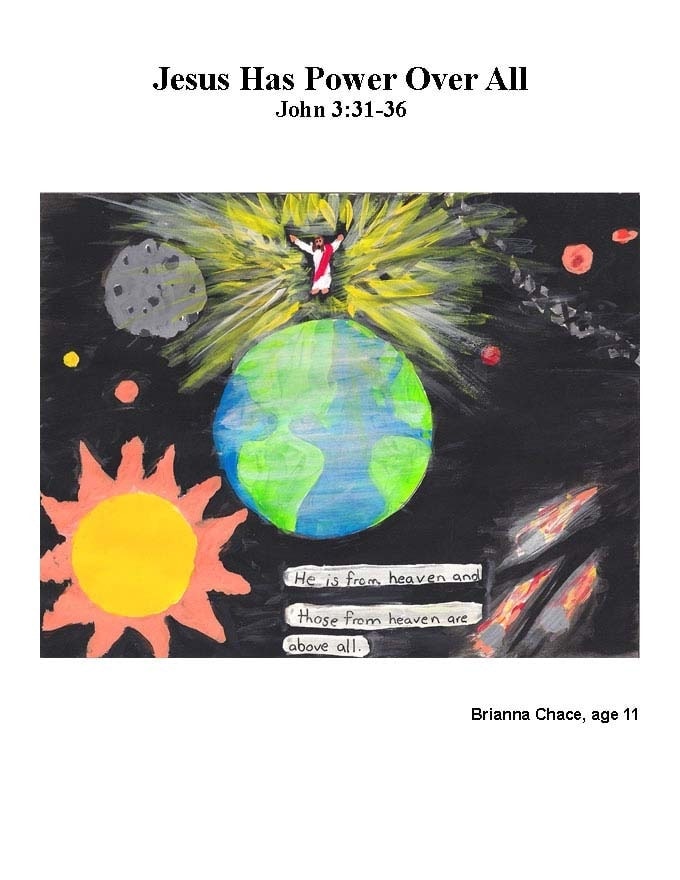 Jesus Has Power Over All

The One Who Comes From Heaven

31 “The one who comes from above is greater than all others. The one who is from the earth belongs to the earth. He talks about things that are on the earth. But the one who comes from heaven is greater than all others. 32 He tells what he has seen and heard, but people don’t accept what he says. 33 Whoever accepts what he says has given proof that God speaks the truth. 34 God sent him, and he tells people what God says. God gives him the Spirit31 fully. 35 The Father loves the Son and has given him power over everything.36 Whoever believes in the Son has eternal life. But those who do not obey the Son will never have that life. They cannot get away from God’s anger.”

Why did God the Father give Jesus power over everything?

“I think God the Father has given his Son power over everything because Jesus is greater than all. He has come from heaven.” Kianna, 10

“Like a smart shepherd and his sheep, Jesus knows how you feel about everything you pray about. That is why God gave his Son, power over us.” Anna, 10

As human beings, we’re limited to what we know and experience on Earth. Because Jesus came from heaven, he could speak about things in heaven. In this way and many other ways, Jesus is superior to all people on Earth.

Do you think a visit to heaven might make a difference in the way you view things on Earth? You would be a changed person because your experience would be different. In Jesus’ ministry, he brought a heavenly view in his messages and actions. Often, people didn’t understand him because their minds were focused only on things related to this world. Jesus saw and did things differently because he was living life on Earth from a heavenly view.

Jesus witnessed faithfully to what he knew was the truth. He told people the truth about his Father and his heavenly kingdom. Most people didn’t believe Jesus, but he kept telling them the truth.

In the history of Israel, God filled his prophets with the Holy Spirit to speak God’s truth with great power. Remember the stories of how God used Moses, Elijah, Daniel and King David to do great things?

God used Moses to part the sea so that the people of God could cross safely on dry land to escape from the Egyptian army. Elijah called upon God to send fire from heaven to burn the offering he had prepared to show God’s power over the false prophets of Baal. Daniel prophesied the rise and fall of kingdoms. David defeated many armies who fought against Israel.

In Jesus, we see a man fully empowered by the Holy Spirit all the time. He lived and acted in total unison with his Father and the Holy Spirit. That’s why Jesus could say, “I assure you that the Son can do nothing alone. He does only what he sees his Father doing. The Son does the same things that the Father does” (John 5:19).

Perfect love between the Father and the Son means there is perfect unity between them. The Son does only what he sees the Father doing and the Father loves his Son so much that he has placed all things into his hands.

“But those who do not obey the Son will never have that life. They cannot get away from God’s anger” (John 3:36b). Just as eternal life is a present possession for all believers, eternal judgment is ready to fall on all who reject Jesus as savior. If we look at people as God sees them, there are only two kinds of people. There are people who have eternal life and those who don’t know Jesus as their savior.

Jesus said he came “to find lost people and save them” (Luke 19:10). We should be like Jesus. We should seek those who don’t know Jesus. They need to be saved from judgment. God wants them to go to heaven. They need to know that Jesus loves them, died for their sins and offers them eternal life as a free gift.

Think about this: The most important power Jesus has is the power to give eternal life to all who believe in him.

Memorize this truth: “Whoever believes in the Son has eternal life. But those who do not obey the Son will never have that life. They cannot get away from God’s anger” (John 3:36).

Ask this question: Can you think of someone who needs to know that Jesus loves them, died for them and offers eternal life to them as a free gift? 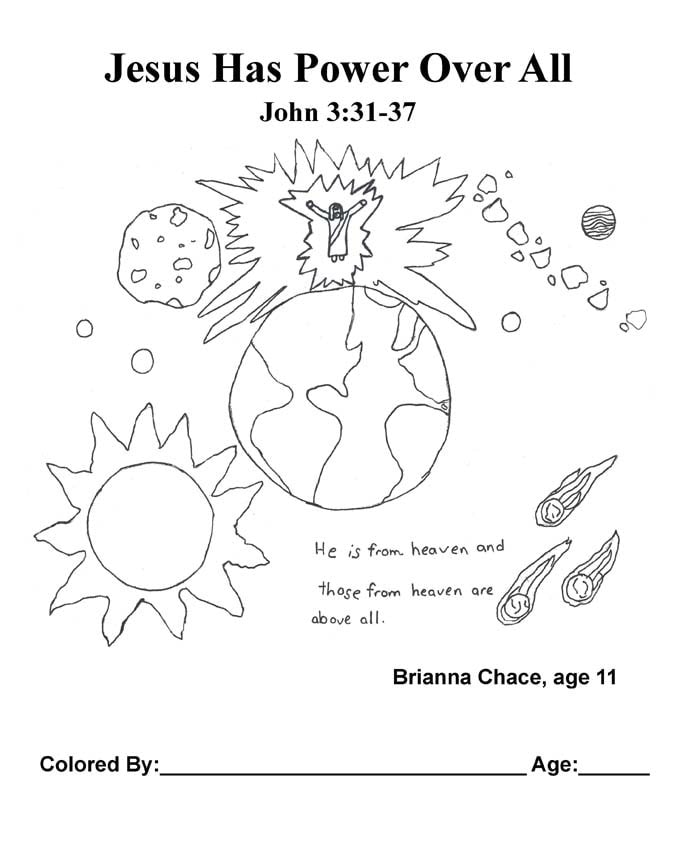