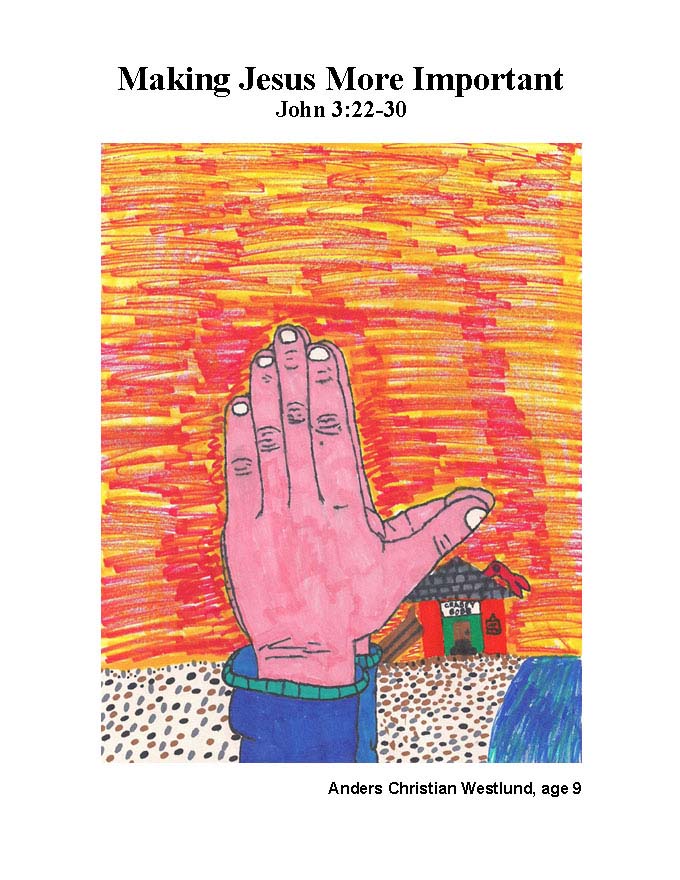 Jesus and John the Baptizer

22 After this, Jesus and his followers went into the area of Judea. There he stayed with his followers and baptized27 people. 23 John was also baptizing people in Aenon, a place near Salim with plenty of water. People were going there to be baptized. 24 This was before John was put in prison.

25 Some of John’s followers had an argument with another Jew about religious washing.28 26 Then they came to John and said, “Teacher, remember the man who was with you on the other side of the Jordan River? He is the one you were telling everyone about. He is also baptizing people, and many are going to him.”

27 John answered, “A person can receive only what God gives. 28 You yourselves heard me say, ‘I am not the Messiah.29 I am only the one God sent to prepare the way for him.’ 29 The bride always belongs to the bridegroom.30 The friend who helps the bridegroom just waits and listens. He is happy just to hear the bridegroom talk. That’s how I feel now. I am so happy that he is here. 30 He must become more and more important, and I must become less important.

27baptize To perform the act of baptism. See “baptism.”

283:25 religious washing The Jews had religious rules about washing in special ways before eating, before worshiping in the Temple, and at other special times.

29Messiah A Hebrew word that has the same meaning as the Greek word Christ (see “Christ”). It was a title for the kings of God’s people in the Old Testament and for the special king God promised to send as a “savior” to defeat evil and establish the reign of God. Many prophets made it clear that this new kingdom would be eternal; that is, not only would the promised Messiah bring about a time of justice and right living among God’s people here on earth, but his kingdom would extend beyond this world to life forever with God. However, most Jews of the first century expected the Messiah to be a political ruler here on earth who would defeat the other nations and return the nation of Israel to a position of great glory and power. But God intended his Messiah to establish a new “Israel,” an eternal kingdom that would bless all the nations.

30bridegroom A man who is getting married.

How can we make Jesus more important in our lives?

“We make Jesus more important in our lives by putting Christ in the center of all we do. We do this by finding pleasure in studying God’s word, learning about him, and hiding God’s Word in our heart that we might not sin against him.” Nathaniel, 8

“We need to be more like Jesus and become less important. Jesus is the one who should be the most important.” Grace, 9

“We make Jesus more important in our lives because we love him and want to get closer to him.” Hannah, 10

Jesus is the most important person in the universe. He is worthy of our praise, worship and love. After Jesus died on a cross for all of our sins, God the Father raised him from the dead. Jesus went back to heaven as the King of kings and Lord of lords. No one is more important than Jesus. He’s the king of the universe!

When a true king enters a room full of people, a person called a herald usually announces to everyone that the king has arrived. God sent John the Baptist as a herald to announce that God’s kingdom had come. The king had arrived, but this king would be different from any other. King Jesus came to serve, not to be served.

When John saw Jesus coming toward him, he said, “Look, the Lamb of God. He takes away the sins of the world!” (John 1:29). John knew that Jesus would die for our sins. All who believe in Jesus receive eternal life. They will live with Jesus forever in his kingdom.

Everybody was talking about the ministry of John the Baptist. Some people thought John might be the promised Messiah. In the Hebrew language “messiah” means anointed, which is the same meaning as “Christ.” Jesus is God’s anointed one.

Remember when the prophet Samuel went to find the next king of Israel. He anointed or poured oil on the head of David. Even though David was a shepherd boy at the time, God told Samuel to pour oil on his head as a sign that he would be the next king (I Samuel 16:1-13). Jesus is God’s anointed one, who came to take away our sins by his death and resurrection.

John said of himself that he was a voice in the wilderness. His job was to prepare people for the coming of the Lord.

John baptized people who believed his message. When John heard that a lot of people were coming to Jesus for baptism, he said, “A person can only receive what God gives” (John 3:27).

John knew his place as the friend of the bridegroom. The Bible presents a picture of Jesus as the bridegroom and his people as the bride (Revelation 21:2, 9; 22:17). The wedding feast of the Lamb will be a time of great joy. We will be with Jesus celebrating his victory over death and his glorious life (Revelation 19:9).

Speaking of his role as the friend of the bridegroom, John said, “He must become more and more important, and I must become less important.” Most people only think of ways they can increase. They want more power, more money and more recognition. Not John. He thought of ways he could decrease. Many people fall into the trap of comparing themselves with other people. John wanted the ministry of Jesus to grow even if it meant that the influence of his own ministry would decrease.

Think about this: If you compare yourself with people, you will always be frustrated. Think of at least three ways Jesus can increase in your life. It might mean that you do some things that only you and God know.

Ask this question: Does your life revolve around Jesus Christ?