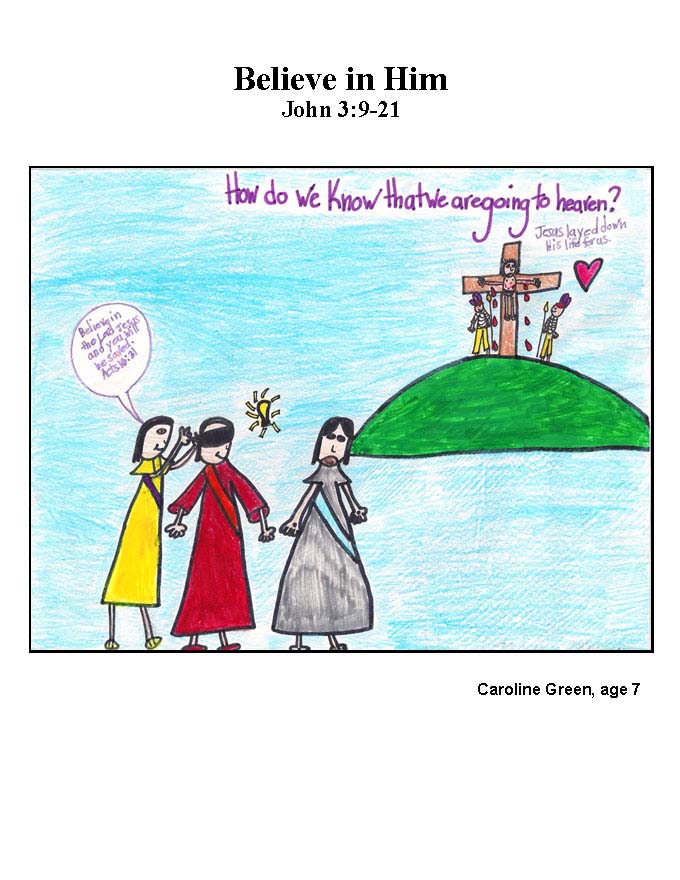 9 Nicodemus asked, “How is all this possible?”

10 Jesus said, “You are an important teacher of Israel,21 and you still don’t understand these things? 11 The truth is, we talk about what we know. We tell about what we have seen. But you people don’t accept what we tell you. 12 I have told you about things here on earth, but you do not believe me. So I’m sure you will not believe me if I tell you about heavenly things! 13 The only one who has ever gone up to heaven is the one who came down from heaven—the Son of Man.22
14 “Moses lifted up the snake in the desert.23 It is the same with the Son of Man. He must be lifted up too. 15 Then everyone who believes in him can have eternal life.”24

16 Yes, God loved the world so much that he gave his only Son, so that everyone who believes in him would not be lost but have eternal life. 17 God sent his Son into the world. He did not send him to judge the world guilty, but to save the world through him. 18 People who believe in God’s Son are not judged guilty. But people who do not believe are already judged, because they have not believed in God’s only Son. 19 They are judged by this fact: The light25 has come into the world. But they did not want light. They wanted darkness,26 because they were doing evil things. 20 Everyone who does evil hates the light. They will not come to the light, because the light will show all the bad things they have done. 21 But anyone who follows the true way comes to the light. Then the light will show that whatever they have done was done through God.

21Israel Another name for Jacob (see Gen. 32:24-28) and for the nation God chose to accomplish his plan of blessing the world through the Messiah (see “Messiah”). The people of Israel were the descendants of Jacob’s twelve sons. In the New Testament this name is sometimes used in a broader sense to mean all of God’s people.

22Son of Man The name that Jesus most often used for himself. The phrase in Hebrew or Aramaic means “human being” or “mankind,” but in Dan. 7:13-14 it is used of a future savior and king, and this was later understood to be the Messiah, the one God would send to save his people.

243:15 Some scholars think that Jesus’ words to Nicodemus continue through verse 21.

253:19 light This means Christ, the Word, who brought to the world understanding about God.

26darkness A symbol for the kinds of things that describe Satan’s kingdom, such as sin and evil.

How do you know if you’re going to heaven?

“If you accept Jesus Christ as your personal Savior, you are guaranteed a place in Heaven. In John 11:25, Jesus said, ‘I am the resurrection and the life. He who believes in Me, though he may die, he shall live.’ So if we just believe in Jesus, we will surely go to Heaven.” Bethany, 9

We shouldn’t be surprised that Nicodemus knew nothing about the new, spiritual birth that happens when we believe in Jesus. There are a lot of religious leaders who know nothing of the new birth of which Jesus spoke. When you believe in Jesus, you are born again spiritually into God’s family. The Holy Spirit comes to live inside of you.

The conversation with Nicodemus has the most popular verse in the entire Bible. The New King James Version translates John 3:16 this way: “For God so loved the world that He gave His only begotten Son, that whoever believes in Him should not perish but have everlasting life.”

The famous German Reformation leader Martin Luther said that John 3:16 is a miniature Bible. If you had to tell the entire Bible story in one sentence, you would probably choose John 3:16. Let’s take a look at it.

“God so loved the world” is the most amazing part of John 3:16. Yet, we know from experience and from the Bible that “men loved darkness rather than light, because their deeds were evil” (John 3:19 NKJV). How can God love people who love what is evil? God loves us but he hates sin and evil. God cannot love our sins, but he loves us.

Most of the time, we love people who love us. It’s hard for us to imagine loving people who hate us. There is a deep sense in which God loves everyone in the entire world. God’s love includes everyone. God doesn’t play favorites, and neither should we.

Who was the worst sinner who ever lived? According to the Bible, it was a Pharisee named Saul. He hated Christians. He took part in the murder of an evangelist named Stephen (Acts 8:1). He was on his way to arrest Christians in Damascus when a bright light blinded him. He heard the voice of Jesus ask, “Saul, Saul! Why are you persecuting Me?” (Acts 9:4).

That man named Saul became the Apostle Paul. God took the greatest enemy of his church and made him the greatest evangelist. That is truly amazing love.

C.S. Lewis, the author of the Chronicles of Narnia, once said that Jesus is either a liar, a crazy man or God. Jesus said he was God. If he wasn’t God, then he lied or he was crazy. Jesus can’t be only a good man because good men don’t lie.

“That whoever believes in Him should not perish but have everlasting life” tells us that faith alone in Christ alone is all that God requires to receive the gift of eternal life. Saving faith means that you depend on Jesus Christ alone for your eternal salvation. Don’t let religious teachers or leaders define faith as something that depends on you. Believing in Christ doesn’t mean you are promising God anything. It does mean that at a point in time you accept God’s gift of eternal life by believing in Jesus as your savior.

What happens if you stop believing?

“Eternal” is the kind of life a person receives who believes in Jesus. How can you lose something that is forever? If you could lose eternal life, then God would be a liar. That would mean that the life God gave you is not really eternal or forever. God can’t lie, but false teachers can and do. Don’t listen to them.

Many people don’t like those who are different from them. They may have different customs, speak a different language or look different. Perhaps they are poor compared to you. Christians should try to see people as God sees them. They are either God’s children because they have trusted Jesus as their savior, or they do not believe in Jesus. God wants us to bring the good news to those who don’t know him.

Think about this: Eternal life is not something one possesses only in the future. You possess eternal life the moment you believe in Jesus as your savior.

Memorize this truth: “I assure you, anyone who hears what I say and believes in the one who sent me has eternal life. They will not be judged guilty. They have already left death and have entered into life” (John 5:24).

Ask this question: Do you have eternal life?