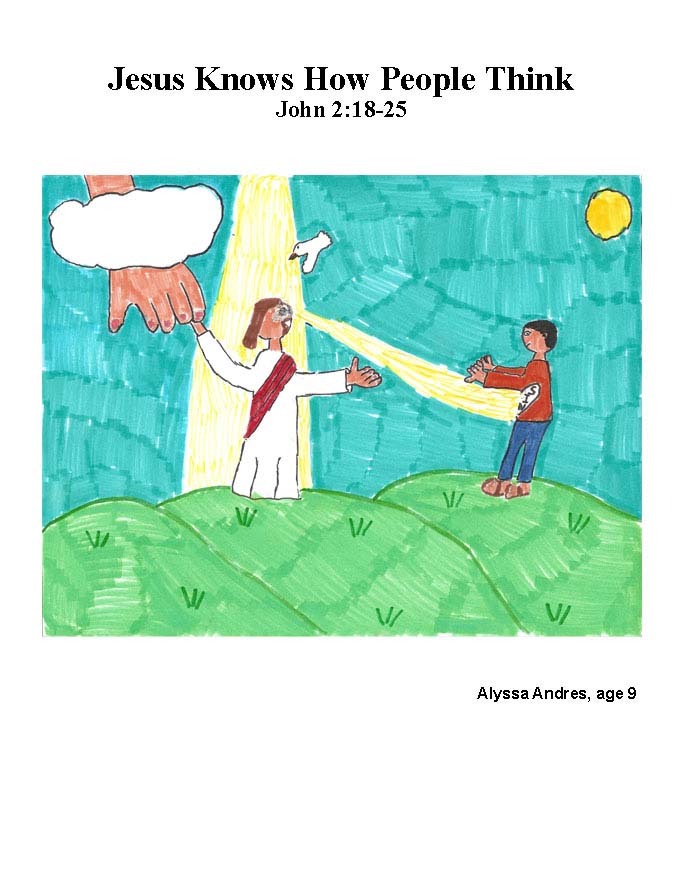 18 Some Jews said to Jesus, “Show us a miracle15 as a sign from God. Prove that you have the right to do these things.”

19 Jesus answered, “Destroy this temple and I will build it again in three days.”
20 They answered, “People worked 46 years to build this Temple! Do you really believe you can build it again in three days?”
21 But the temple Jesus meant was his own body. 22 After he was raised from death, his followers remembered that he had said this. So they believed the Scriptures, and they believed the words Jesus said.

23 Jesus was in Jerusalem for the Passover festival. Many people believed in him because they saw the miraculous signs16 he did. 24 But Jesus did not trust them, because he knew how all people think. 25 He did not need anyone to tell him what a person was like. He already knew.

15miracle An amazing act done by the power of God.

16miraculous sign An amazing act that demonstrates the power of God.

“Because Jesus knew some people were mean.” Torie, 7

“Even if people believe in Jesus, their mind, will and emotions still might not be changed until they renew their minds with the Bible.” Katherine, 9

“Jesus was afraid that if people knew about the miracles he did, some people would get angry and kill him before God’s timing.” Emma, 10

“Jesus didn’t trust the people because he knew that their thoughts and feelings about him would change moment by moment. Instead, Jesus trusted God, because God was his Father, and Jesus knew that God would never change. God would always stay faithful, for he is good. God also promises us that he will remain faithful and unchanging for us. I think we should be like Jesus and instead of trusting in what people do and say, we should trust in God.” Maranatha, 12

Early in his ministry, Jesus performed miracles in Jerusalem. The Bible says, “Many people believed in Jesus because they saw the miracles he did. But Jesus did not trust them. Why? Because Jesus knew the things people were thinking. Jesus did not need any person to tell him about people. Jesus knew what was in a person’s mind” (John 2:23b-25).

Some people say that the word “believe” in this part of the Bible doesn’t really mean believe as in trusting Christ as your savior. They say it’s a head belief and not a true heart belief. The Gospel of John knows nothing of this kind of nonsense. People either believe in Jesus as their savior or don’t believe in him.

This view usually comes from the false idea that the moment one believes in Jesus as savior, all of life changes quickly for the better. Jesus should be able to trust those who believe in him, right?

It’s true that the biggest problem you’ll ever have does disappear at the moment you trust Jesus as your savior. Death is the biggest problem. Jesus conquered death when God raised him from the grave after three days and gave him a resurrection body that would never die. All Christians will be raised from the dead to share in Christ’s victory over death.

The Bible is God’s handbook for changing the way we think. It shows that God is the center of the universe. We are not. We must think differently about how we see ourselves, people and the world around us.

Jesus knew the difference between new believers and those who had been trained as his disciples. He didn’t trust new believers by telling them all about his plans. If these new Christians knew everything Jesus planned to do, they might even try to stop him from dying on the cross. Remember what the Apostle Peter did when Judas brought people to arrest Jesus? He pulled out his sword and cut the ear off one of them (John 18:10-11).

Peter had been Jesus’ disciple for three years. He still didn’t understand why Jesus had to die on the cross. He was so scared of being arrested that he denied knowing Jesus three times.

Except for the Apostle John, all of Jesus’ disciples either denied him or ran away after he was arrested. After Jesus rose from the dead, he sent the Holy Spirit to give his disciples power to preach the gospel. Many of them died preaching the gospel. It takes time before Jesus can trust us with his work.

Think about this: Before Jesus left Earth to go back to Heaven, he gave his disciples a job. He told them to preach the gospel to people all over the world. He sent the Holy Spirit to live inside them so that they would have power to do this job (Acts 1:7-9).

Memorize this truth: “Trust the Lord completely! Don’t depend on your own knowledge. Think about God in all that you do. Then he will help you.” (Proverbs 3:5-6).

Ask this question: Can God trust you to tell your friends about the good news of his life, death and resurrection?