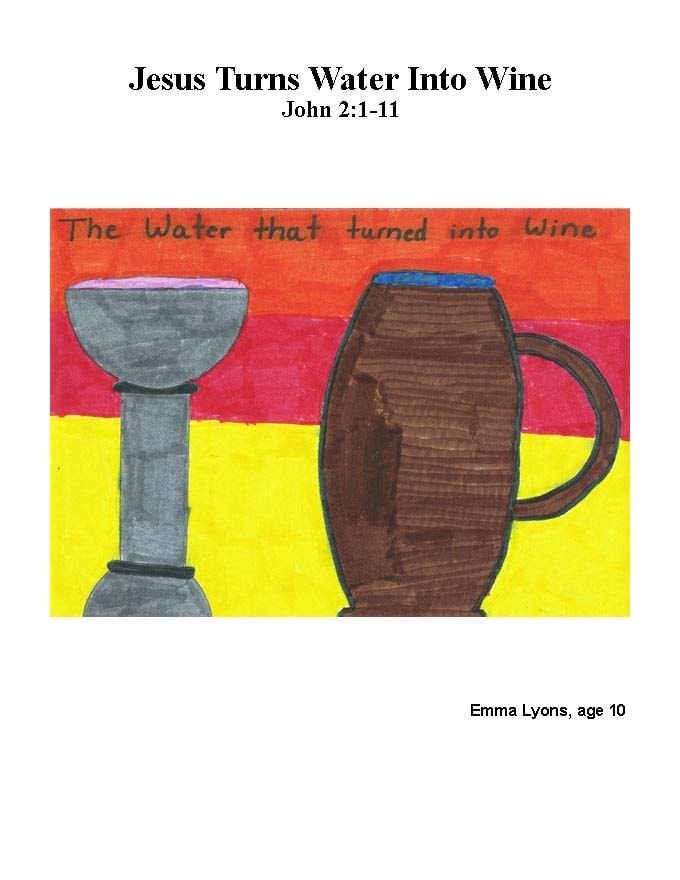 The Wedding at Cana

1 Two days later there was a wedding in the town of Cana in Galilee, and Jesus’ mother was there. 2 Jesus and his followers were also invited. 3 At the wedding there was not enough wine, so Jesus’ mother said to him, “They have no more wine.”

4 Jesus answered, “Dear woman, why are you telling me this? It is not yet time for me to begin my work.”
5 His mother said to the servants, “Do what he tells you.”

6 There were six large stone waterpots there that were used by the Jews in their washing ceremonies.5 Each one held about 20 or 30 gallons.6

7 Jesus said to the servants, “Fill the waterpots with water.” So they filled them to the top.
8 Then he said to them, “Now dip out some water and take it to the man in charge of the feast.”

So they did what he said. 9 Then the man in charge tasted it, but the water had become wine. He did not know where the wine had come from, but the servants who brought the water knew. He called the bridegroom7  10 and said to him, “People always serve the best wine first. Later, when the guests are drunk, they serve the cheaper wine. But you have saved the best wine until now.    11 This was the first of all the miraculous signs8 Jesus did. He did it in the town of Cana in Galilee. By this he showed his divine greatness,9 and his followers believed in him.

52:6 washing ceremonies The Jews had religious rules about washing in special ways before eating, before worshiping in the Temple, and at other special times.

7bridegroom A man who is getting married.

8miraculous sign An amazing act that demonstrates the power of God.

9divine greatness Literally, “glory,” a word that refers to the special qualities of God. See “glory.”

What can we learn from Jesus turning the water into wine?

“The wine was delicious because Jesus made it.” Anjali, 8

“Jesus showed us great humility right from the start of His preaching. He even said that His hour had not come, but He performed the miracle anyway. Jesus shows us that He did not come down from heaven for Himself, but He came for the whole world.” Kristen, 12

“It is when Jesus first ever shows his glory.” Sarah, 6

“We learn that Jesus really loved his mother and that the servants believed in him. And we know that it was a lot of wine! In my Bible it says that the jugs held from 20 to 30 gallons (each) and the servants filled them to the brim.” Sierra, 8


“One thing we can learn from Jesus turning water into wine is he respects his mom. One detail from the verse that supports my answer is when his mom told him there was no more wine, Jesus made more wine even though it was not his time to do a miracle.

“Another thing I learned from Jesus turning water into wine is he likes helping others. One detail that supports my answer is the people that were at the wedding wanted to keep on celebrating, and they wanted wine to keep celebrating. Since there was no more wine left, he was willing to make more wine. When Jesus (performs) a miracle, the outcome is always better than before.” Micah Benoit, 9

In the time in which Jesus lived, wedding parties could last for several days. Running out of wine would have been very embarrassing to the bride and groom. Their friends might remember it for their entire lifetime.

The miracle of turning water into wine was the first one that Jesus performed. The Bible calls it a sign. The word “miracle” in verse 11 should be translated “sign.” As a sign, this miracle points to something greater than the miracle itself.

Does the Bible ever use “wine” as a symbol of something greater than itself? Yes, indeed! Do you remember what Jesus did at the Last Supper when eating with his disciples?

“In the same way, after supper, Jesus took the cup of wine and said, ‘This wine shows the new agreement {from God to his people}. This new agreement begins with my blood (death) that I am giving for you’” (Luke 22:20).

The wine Jesus and the disciples drank at the Last Supper represented the blood of Jesus. He poured out his life on the cross to pay for our sins. Do you think Jesus could ever look at wine without thinking of it as a symbol of his death?

When Jesus’ mother told him they had run out of wine at the wedding feast, he said his hour had not yet come. What hour is that? One easy way to discover what Jesus was thinking is to see how the word “hour” is used later in the Gospel of John.

On the night before Jesus died on a cross, he prayed, “Father, the hour has come. Glorify your son, that your son also may glorify you” (John 17:1).

Jesus knew the hour was coming when he would die for our sins on a cross. God glorified his son by raising him from the dead and making him ruler of the universe.

Jesus knew God’s plan for his life. The plan had a timetable. He didn’t want authorities to arrest him before he had time to train his disciples. He wanted his disciples to keep preaching the good news to the entire world after he was gone.

At the Last Supper, Jesus also said this about wine: “Then Jesus took a cup of wine. He gave thanks to God for it. Then he said, ‘Take this cup and give it to everyone here. I will never drink wine again until God’s kingdom comes’” (Luke 22:17-18).

Jesus is going to have a big party in heaven. It’s called the marriage feast of the lamb. When the Apostle John saw a vision of heaven, an angel told him to write these words: “Those people who are invited to the wedding meal of the Lamb are blessed (happy)!” Then the angel said, “These are the true words of God” (Revelation 19:9).

If you’ve trusted Jesus Christ as your savior, you’re going to the party of all parties in heaven. All Christians will celebrate the marriage of Jesus Christ and his bride, which is the church. In a good marriage, the husband and wife live together in harmony, peace and happiness. God uses marriage as a symbol of the unity all Christians will enjoy with Jesus.

When the prophet Amos described a time when God would bless his people, he used wine as a symbol of blessing: “The sweet wine will pour from the hills and mountains” (Amos 9:13).

Like many good things that God created, wine can be abused. The Bible warns against drinking too much wine: “Wine and beer make people lose control of themselves. They get loud and start to brag. They become drunk and do foolish things” (Proverbs 20:1).

Many people destroy their lives by getting drunk. Some people should never drink at all because they can’t stop drinking once they start. God wants to fill or control our lives. The Apostle Paul wrote: “Don’t be drunk with wine. That will ruin (destroy) you spiritually. But be filled with the Spirit” (Ephesians 5:18).

When Jesus turned the water into wine, only a few knew he had done the miracle: his mother, disciples and the servants who filled the stone pots. When the master of the wedding feast tasted the wine that Jesus made, he asked the groom why he didn’t serve the best wine first. Jesus made the best wine.

By turning the water into wine, Jesus blessed the bride and groom. He saved them from being embarrassed. More importantly, Jesus used this miracle to reveal himself to his disciples: “His followers believed in him” (John 2:11b).

There were times in Jesus’ ministry when he did amazing miracles for everyone to see. In the last days of his ministry, Jesus raised Lazarus from the dead in a town close to Jerusalem (John 11). At this point, Jesus knew that the time was near when religious leaders would arrest him. The wedding feast occurred at the beginning of his ministry. This was not the time to call attention to himself in front of a large crowd.

Some people have said Jesus didn’t respect his mother because he called her “woman” instead of “mother.” If we do a word search on the word “woman,” we will see that Jesus did respect his mother. When Jesus hung on the cross, he looked down and saw his mother standing with the Apostle John. He said, “Dear woman, here is your son” (John 19:26). In the next breath, Jesus said to John, “Here is your mother” (John 19:27).

From that day forward, John took Mary into his house and cared for her. Jesus respected his mother because he asked the Apostle John to take care of Mary as though she were his mother.

Some things don’t translate well from one language to another. In the Jewish culture of Jesus’ day, calling your mother “woman” was not a sign of disrespect.

Some people think that being a spiritual person means you must live alone and not do things with friends. Jesus went to a wedding party and turned water into wine. Some people who are against drinking wine say that Jesus turned the water into grape juice. This can’t be true. The original language of the New Testament is Greek. The Greek word for wine does not mean grape juice. Jesus drank wine, and we know that he never sinned. He was always filled or controlled by the Holy Spirit.

Just because Jesus turned water into wine doesn’t give anyone an excuse for getting drunk. The Bible clearly forbids getting drunk. Some people should never drink wine or any kind of alcohol because they can’t control themselves. The Spirit of God should be controlling our lives.

Think about this: Like a laser, Jesus focused on his mission of offering himself as a sacrifice for our sins.

Ask this question: Do you think about a mission God has given you?