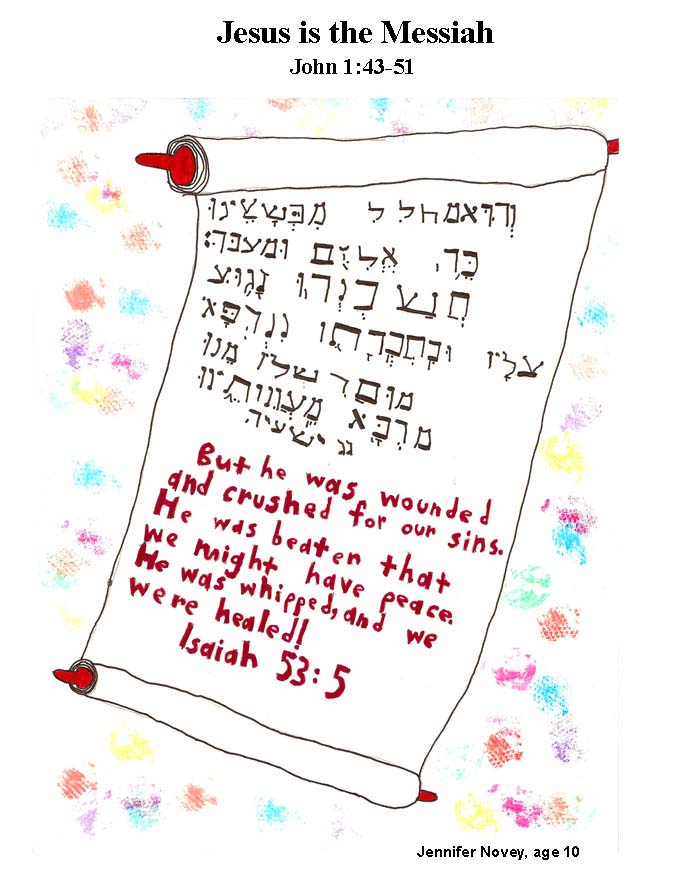 Jesus is the Messiah

43 The next day Jesus decided to go to Galilee. He met Philip and said to him, “Follow me.” 44 Philip was from the town of Bethsaida, the same as Andrew and Peter. 45 Philip found Nathanael and told him, “We have found the man that Moses48 wrote about in the law. The prophets49 wrote about him too. He is Jesus, the son of Joseph. He is from Nazareth.”

46 But Nathanael said to Philip, “Nazareth! Can anything good come from Nazareth?”
Philip answered, “Come and see.”
47 Jesus saw Nathanael coming toward him and said, “This man coming is a true Israelite,50 one you can trust.1”
48 Nathanael asked, “How do you know me?”
Jesus answered, “I saw you when you were under the fig tree, before Philip told you about me.”
49 Then Nathanael said, “Teacher, you are the Son of God. You are the King of Israel.2”

50 Jesus said to him, “Do you believe this just because I said I saw you under the fig tree? You will see much greater things than that!” 51 Then he said, “Believe me when I say that you will all see heaven open. You will see ‘angels of God going up and coming down’3 on the Son of Man.4”

48Moses One of the most important leaders of the Israelites during the time of the Old Testament. God used him to give the people his law, which is often called “the Law of Moses.”

49prophet A person who speaks a message from God. Many of the books in the Old Testament are messages spoken or written by “the prophets,” who were some of those God chose to speak for him. God often used dreams or visions to tell or show his prophets what they should say.

50Israelite Belonging to the nation of Israel (see “Israel”).

2Israel Another name for Jacob (see Gen. 32:24-28) and for the nation God chose to accomplish his plan of blessing the world through the Messiah (see “Messiah”). The people of Israel were the descendants of Jacob’s twelve sons. In the New Testament this name is sometimes used in a broader sense to mean all of God’s people.

4Son of Man The name that Jesus most often used for himself. The phrase in Hebrew or Aramaic means “human being” or “mankind,” but in Dan. 7:13- 14 it is used of a future savior and king, and this was later understood to be the Messiah, the one God would send to save his people.

How do we know that Jesus is the Messiah?

“Although plenty of people living in the first century A.D. were looking for the Messiah, most missed him. They did not think that the Messiah would come as the baby son of a carpenter; they thought he would be a great warrior king who would come as a grown man.” Giselle, 11

“We can know that Jesus is the Messiah because He rose from the dead, just as He said He would!” Brett, 8

“We can know that Jesus is the Messiah because He fulfilled Old Testament prophecies. ‘Behold, your King coming to you (Jerusalem); He is endowed with salvation, humble, and mounted on a donkey, even on a colt, the foal of a donkey’ (Zechariah 9:9).” Sean, 11


“Jesus gave us many signs to prove that we was the Messiah. He fulfilled prophecies, performed miracles and changed peoples’ lives.

“We know Jesus is the Messiah because Jesus knew who Nathanael was and what he was doing before Philip had introduced him to Jesus. Through this story we can be sure that Jesus knows who we are and what we are doing every day. Only God has the ability to do this.

“Another way we know that Jesus is the Messiah is because he fulfilled all the prophecies that were made many years before Jesus came to the earth. One of the earliest prophecies was made in Deuteronomy 18:15,18. It tells us that the Lord will raise up a prophet who will know everything. ‘A prophet’ refers to Jesus and Jesus knows everything: past, present and future.

“Another prophecy is found in Isaiah 9:6-7. It says that the Lord will send a king who will be called Wonderful, Counselor, Mighty God, Everlasting Father and Prince of Peace. He will reign forever in peace and justice. Through these prophecies and others, we know Jesus is the Messiah. He is the only way to salvation.

“Yet another way Jesus shows us that he is the Messiah is through the many miracles that he performed, miracles that only God can do. Jesus healed the sick, turned water into wine and changed peoples’ lives. Jesus will continue to change our lives when we choose to follow him.

Jesus Christ is the only way to heaven, but there are many ways of finding him. Sometimes Jesus speaks directly to people as he did with Phillip and later the Apostle Paul. Most of the time, Jesus uses Christians to tell others about him. We can learn a lot about how to lead people to Christ from seeing what Phillip did when he talked to his friend Nathanael.

Phillip told Nathanael that he had found the one Moses and the prophets wrote about in the Bible. Using the Bible is one of the best ways to let people know Jesus is God’s only son. Moses told the Israelite people that God would send them a prophet like himself: “The Lord your God will send to you a prophet. This prophet will come from among your own people. He will be like me. You must listen to this prophet” (Deuteronomy 18:15).

A prophet is someone who speaks for God. Many times Jesus said he only spoke what he heard from his heavenly Father. Jesus said, “The Father (God) who sent me told me what to say and what to teach” (John 12:49b).

The prophet Isaiah wrote about 700 years before Jesus was born. Isaiah wrote about how Jesus would suffer for our sins: “But he was given pain to suffer for the wrong things we did. He was crushed for our guilt. A debt we owed—our punishment—was given to him. We were healed (forgiven) because of his pain. But {even after he did this,} all of us wandered away like sheep. We all went our own way. {We did this after} the Lord {freed us from our guilt and} put all our guilt on him” (Isaiah 53:5-6).

When Nathanael heard what Phillip said about Jesus, he said, “Can anything good come out of Nazareth?”

Phillip didn’t argue with his friend Nathanael. He said, “Come and see.” Arguing usually doesn’t help bring people to Jesus. It might even turn them away from him.

Even though people didn’t think highly of the place where Jesus lived, that really wasn’t important. Finding the Messiah is far more important than the town where he lived. Jesus is the one that Moses and the Old Testament prophets wrote about. He is the one God sent to save us from our sins so that we could live with him forever.

You may live in a small town or live in a family that doesn’t have a lot of money. This is the kind of place and family where Jesus grew up. Knowing you are God’s child is what is important. God has an important purpose and job for you.

Be friendly. Be kind. Be like Phillip. Invite your friends to learn more about Jesus.

Jesus told Nathanael that he was an honest man. Nathanael asked Jesus how he knew him. Jesus said, “Before Philip called you, when you were under the fig tree, I saw you.”

That’s all it took for Nathanael to say, “Rabbi, You are the Son of God! You are the King of Israel!”

Because Jesus is God as well as man, he always knows where we are and what we are thinking. No one can hide anything from Jesus. Nathanael knew that only God’s son could know where he was before Philip called him. This was a miracle. In the time Jesus lived, cell phones and email hadn’t been invented.

Jesus was amazed at the faith of Nathanael. Jesus told him that he would see greater things, and he did. Nathanael saw Jesus perform all kinds of miracles. That’s the way faith works. If we believe God when he shows us small things, he will show us greater things. God wants to show us that we can trust him for small and big things.

God once showed a man named Jacob a ladder to heaven. In Jacob’s dream, angels were going back and forth between Heaven and Earth. Jacob was amazed to discover that God was in the place where he was (Genesis 28:10-22).

Jesus told Nathanael that he would have an experience like Jacob. He would see heaven open. Angels would be busy going back and forth to heaven. All their focus and attention would be upon Jesus Christ. One of the many names of Jesus is “Immanuel.” This means “God with us.” When God sent Jesus to Earth as a baby born in Bethlehem, he opened heaven.

Think about this: God wants us to know what he is doing in the place where we are. You can be sure that God is always at work in every place.

Memorize this truth: “Then Nathanael said to Jesus, ‘Teacher, you are the Son of God. You are the King of Israel (God’s people)’” (John 1:49).

Ask this question: Do you believe God wants to show you what he is doing in the place where you are?