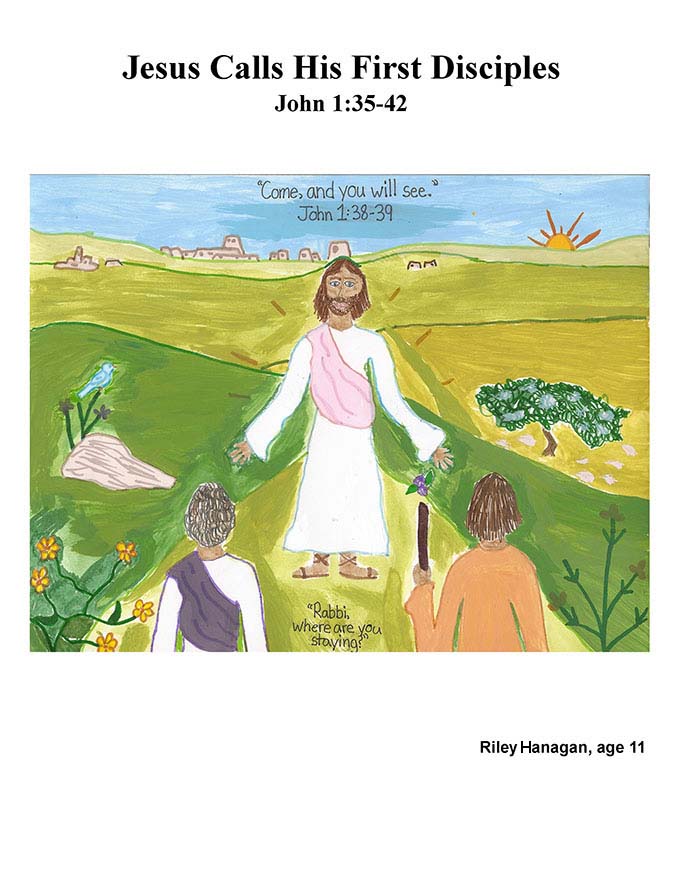 The First Followers of Jesus

35 The next day John was there again and had two of his followers with him. 36 He saw Jesus walking by and said, “Look, the Lamb44 of God!”

37 The two followers heard him say this, so they followed Jesus. 38 Jesus turned and saw the two men following him. He asked, “What do you want?”
They said, “Rabbi, where are you staying?” (“Rabbi” means “Teacher.”)
39 He answered, “Come with me and you will see.” So the two men went with him. They saw the place where he was staying, and they stayed there with him that day. It was about four o’clock.
40 These men followed Jesus after they had heard about him from John. One of them was Andrew, the brother of Simon Peter. 41 The first thing Andrew did was to go and find his brother Simon. Andrew said to him, “We have found the Messiah.45” (“Messiah” means “Christ.46”)

42 Then Andrew brought Simon to Jesus. Jesus looked at him and said, “You are Simon, the son of John. You will be called Cephas.” (“Cephas” means “Peter.47”)

44Lamb A symbolic name for Jesus Christ. It means that he was an offering for sin like the lambs that were offered as a sacrifice to God in the Old Testament.

45Messiah A Hebrew word that has the same meaning as the Greek word Christ (see “Christ”). It was a title for the kings of God’s people in the Old Testament and for the special king God promised to send as a “savior” to defeat evil and establish the reign of God. Many prophets made it clear that this new kingdom would be eternal; that is, not only would the promised Messiah bring about a time of justice and right living among God’s people here on earth, but his kingdom would extend beyond this world to life forever with God. However, most Jews of the first century expected the Messiah to be a political ruler here on earth who would defeat the other nations and return the nation of Israel to a position of great glory and power. But God intended his Messiah to establish a new “Israel,” an eternal kingdom that would bless all the nations.

46Christ Literally, “Anointed,” a title that comes from the Old Testament ceremony in which perfumed oil was poured or rubbed on someone being appointed to a high office, especially that of prophet, priest, or king, to show that this person was chosen by God for that role. The Hebrew word is “Messiah,” a title used for Old Testament kings and for the one God would send as prophet, priest, and king to bring people back to a good relationship with him.

What can we learn from Jesus inviting his first disciples to follow him?

“We can learn from John the Baptist to tell people who Jesus really is. John had many followers himself, but he didn’t try to compete with Jesus.” Danae, 10

“Jesus invited simple fishermen to follow him. I think he did that to show us that God’s love is for everyone, not just the people who are pretty, smart or popular.” Emily, 12

“We can learn that once we learn about Jesus, we should tell others.” Anna, 10

“Jesus wants everyone to come to him. Jesus has time for everyone and will not say ‘hurry up’ or tell them to go away because he is busy.” Rebekah, 6

“When you are being open and willing to allow people to follow you, it might make them curious,” Sarah, 11

“Andrew and Simon were just ordinary men, but God still had a plan for them. Andrew followed Jesus right away and spent all day with Him. This teaches me that I can know Jesus by following Him and spending time with Him. I can pray, worship and read the Bible to know Jesus more.

“The next thing I learned is the way Andrew told his brother Simon about Jesus being the Messiah and brought him to meet Jesus. I think Andrew wanted Simon to know Jesus because his brother was his best friend. I can tell people I love about Jesus, invite them to church and AWANAS.

“The last thing this passage taught me is when we believe in Jesus as our Savior, He changes us. Jesus gave Simon a new name: Peter ‘Rock.’ Jesus knew who Simon was, but He also knew the great plan for who Peter would become. The Bible promises us when the Holy Spirit lives in our hearts that He makes us a new creation (II Corinthians 5:17).” Wyatt Stulac, 6

History books are filled with stories of people that historians consider great. How many historians say John the Baptist is the greatest person who ever lived? I don’t know of any. Here is what Jesus said about him: “I tell you the truth: John the Baptizer is greater than any man that has ever lived. But even the least important person in the kingdom of heaven is greater than John” (Matthew 11:11).

Jesus didn’t look for disciples in important places like Jerusalem. He began his ministry in the desert where two disciples of John the Baptist followed him.

“What do you seek?” Jesus asked them. Jesus wanted his disciples to think about why they were following him. People follow Jesus for different reasons.

At the time when Jesus walked on the Earth, a governor from Rome ruled the Israeli people. Roman soldiers in Israel enforced Roman laws. Many Jews wanted the Messiah to defeat the Romans. “Messiah” and “Christ” mean the same thing: anointed. The first comes from the Hebrew language and the second comes from the Greek language. When kings started their rule, someone usually poured oil on their heads in a ceremony called anointing.

Many Jews read Isaiah 9 and 10 and thought the Messiah would come as a royal king with great power. Jesus didn’t come the first time to crush his enemies. He came to put himself into the hands of those who would crush him on a cross (Isaiah 53). Jesus told his disciples that the cross must come before the crown.

When the disciples asked Jesus where he was staying, he said, “Come with me and you will see” (John 1:39). Jesus doesn’t show us everything at once. He wants his followers to trust him. Every day, we must come and see what he has for us.

After only one day with Jesus, Andrew told his brother Simon, “We have found the Messiah” (John 1:41). When Jesus saw Simon, he changed his name to Cephas. The name “Cephas” in the Aramaic language is the same as “Peter” in the Greek language. The name in both languages means “rock.”

Let’s say that you could choose any bicycle. Unless you do a lot of research, you would be smart to ask a bicycle expert to help you choose. The bicycle expert knows how each bike is built and how it will perform.

God knows each of us. He made us. He knows us better than we know ourselves. He knows what he wants to do through us. His wise plan will bring him glory and will make us joyful.

Jesus knew that Simon would change into Peter the rock. When Peter said that Jesus is the Christ, this became like a solid rock upon which Jesus would build his church (Matthew 16:13-20). What makes Christians different is that we believe that Jesus Christ is God’s anointed one. He is the only one who can save us from our sins and give us eternal life.

When the two disciples asked Jesus where he stayed, he said, “Come and see.” If we don’t make time to “come and see” Jesus, we’ll never get to know him. Spending quality time with Jesus will result in telling others about him. God always has time for us, but do we have time for him? We always make time for things that are important to us.

To follow Jesus, you will have to make hard choices about how you spend time. Many people spend more than four hours every day watching television. That adds up to 28 hours a week, or more than one day per week. Imagine how much better you would know Jesus if you spent four hours a day learning about him.

Jesus liked to make people curious about himself. He asked a lot of questions to which he already knew the answers. We should think of things we can say about Jesus that will make people want to know more about him.

Think about this: Good fishermen know how to attract fish. Jesus was like a wise fisherman. He knew how to make people want to know more about him.

Memorize this truth: “Jesus said, ‘Come follow me. I will make you {a different kind of} fishermen. You will work to gather people, {not fish}’” (Matthew 4:19).

Ask this question: Are you fishing for people by pointing them to Christ?