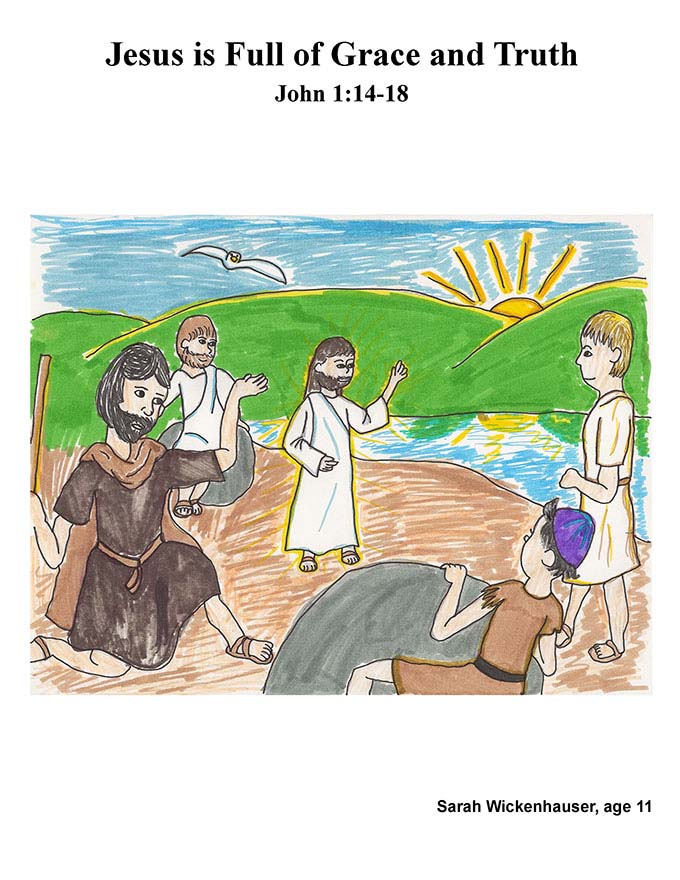 Jesus is Full of Grace and Truth

14 The Word became a man and lived among us. We saw his divine greatness25—the greatness that belongs to the only Son of the Father. The Word was full of grace26 and truth. 15 John told people about him. He said loudly, “This is the one I was talking about when I said, ‘The one who is coming after me is greater than I am, because he was living before I was even born.’”

16 Yes, the Word was full of grace and truth, and from him we all received one blessing after another.27 17 That is, the law was given to us through Moses,28 but grace and truth came through Jesus Christ. 18 No one has ever seen God. The only Son is the one who has shown us what God is like. He is himself God and is very close to the Father.29

25divine greatness Literally, “glory,” a word that refers to the special qualities of God. See “glory.”

26grace The love and kindness that God shows in his complete willingness to give people favors he does not owe them and blessings they don’t deserve.

271:16 one blessing after another Literally, “grace in place of grace.”

28Moses One of the most important leaders of the Israelites during the time of the Old Testament. God used him to give the people his law, which is often called “the Law of Moses.”

What does the Bible mean when it says Jesus was full of grace and truth?

“If you had a bad day and had a time out, God would forgive you.” Hayes, 6

“It means that God was full of grace. When people sinned, he gave grace.” Katie, 10

“When Jesus lived among us, he never lied and he was very graceful.” Evan, 7

“I want to be graceful and truthful like Jesus, and Jesus wants you to do the same.” Mariah, 10

“The Bible tells us that God’s grace saves us through our faith in His Son. Jesus Christ is the Truth because He is the only Way to Heaven. In Psalm 1, we read that God’s people obey and follow God (Jesus is the Way), and because we follow, we bear good fruit and are pleasing in God’s eyes.” Hannah Levin, 7

The word “lived” as in “The Word become man and lived among us” has a history in the Old Testament. Moses followed God’s instructions when he built a box to hold two stone tablets on which were written the 10 Commandments. This box and some other things were placed in a portable place of worship called a tabernacle. This tabernacle became a symbol of God living with his people during their 40 years of wandering in the desert. During the day, a cloud appeared to guide the Israelites. At night, it looked like a fiery cloud.

When the Virgin Mary gave birth to Jesus in Bethlehem, the Apostle Matthew quoted the prophet Isaiah, who wrote: “’The virgin will be pregnant and will give birth to a son. They will name him Immanuel.’ (Immanuel means, ‘God with us.’)” (Matthew 1:23).

Other prophets received messages from God about how this would happen. God told the prophet Micah that the rightful ruler of Israel would be born in Bethlehem (Micah 5:2). God wanted us to know many details about his son so that we would know him when he came.

Pastor Emile Wolfaardt says this: “A little more than 2000 years ago God stepped onto our earth, pitched His tent and set up camp right in the middle of us all. That is what the word ‘dwelled’ can mean – to set a tent. In other words, the Word became flesh and pitched His tent among us.”

Jesus is both God and man in one person. That’s why he is like a bridge between us and God. As God, he is equal with God the Father. As man, he knows our weakness even though he always pleased his Father and never sinned. Because Jesus always pleased God, he could offer himself as a sacrifice for our sins. When Jesus died on the cross, he received the punishment that we deserve for the things we have done wrong.

When Jesus died on the cross, he said, “Father, forgive these people {that are killing me}. They don’t know what they are doing” (Luke 23:34).

As God, Jesus could have snapped his fingers and killed people who told lies about him, whipped him and nailed him to a cross. Jesus allowed himself to be treated unfairly. Why didn’t he call angels to help him? Jesus loved us so much he wanted to take the punishment for our sins. He paid for our way to heaven. He wants us to live with him forever. Jesus now offers us eternal life as a free gift. You can receive this gift by believing in Jesus as your savior. Trust in him alone as the one who paid for your sins and rose from the dead.

Think about this: Jesus Christ left heaven to suffer for us on the cross. He is preparing a place in heaven for those who trust in him as their savior.

Memorize this truth: “The Word became a man and lived among us. We saw his glory—the glory that belongs to the only Son of the Father. The Word was full of grace (kindness) and truth” (John 1:14).

Ask these questions: Have you received the truth about your need for a savior? Have you received God’s grace by trusting in the life, death and resurrection of the Lord Jesus Christ as your only hope to live with God forever? 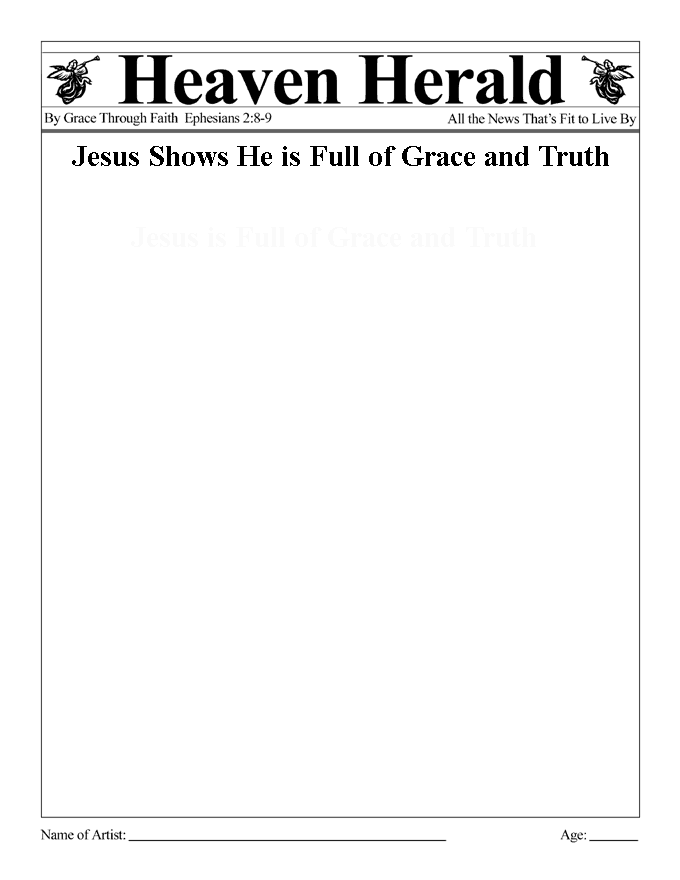